OPINION: Why Germany can't break out of its Covid rules rut

Despite other countries getting rid of Covid regulations like mandatory masks on public transport, Germany remains devoted - while also allowing events without masks. Columnist Brian Melican asks why the country can't move on from inconsistent rules.

If you’ve always dreamt of being able to travel in time, there’s now a surprisingly easy way to do it: just take the ICE from Brussels to Cologne. When you get on at Midi station, things are just like they were in Germany in July 2019: friendly guards greet passengers at the doors and, soon after departure, someone from the BordBistro comes through to first class with a tray of coffee; the weather is fine, the train is punctual, and everyone is beaming ear to ear. You can see they are, of course, because they’re not wearing masks.

Then, in one of the tunnels between Liège and Aachen, we speed into July 2022 Germany: “Meine Damen und Herren…” The jarring announcement tells passengers in four languages – and in no uncertain terms – that they have to wear a medical face-mask on public transport in Germany; they may remove it to eat and drink, but must not overextend the break, and must make sure that it always covers both their mouth and their nose; any deviation from this rule will result in them being removed from the train. Suddenly, the guards and waiters re-appear – and this time, they’re not smiling…

Okay, so this may not be genuine time travel, but it’s certainly a good piece of absurdist theatre and, what is more, a graphic example of just how dysfunctional the German approach to dealing with Covid has become. It’s not that Germany is the only country with an irrational fear of people catching corona on trains and buses (but not, say, in pubs, gyms, or shops): in the UK, France, and Belgium, public transport was one of the last non-clinical settings in which masks were still required; in Sweden, trains were the only one in which they were officially recommended. Yet, everywhere else, common sense eventually prevailed.

In Germany, meanwhile, the world’s largest beer festival and proverbial germ-den, the Oktoberfest, will be returning on 17th September, from when each of the 16 largest tents will be welcoming up to 10,000 guests belting out Schlager (and virus particles) from 11am to 11pm daily for two weeks straight. It will, however, still be illegal to take the underground to the festival site without wearing a mask.

READ ALSO: The worst of both worlds: Germany's coronavirus policy pleases no one

In view of the manifest absurdity of the current situation – and the fact that we are now one of the few remaining European countries with any form of legally-required non-pharmaceutical interventions left in place – it’s worth asking what has gone wrong in Germany, a country which, in the first phase of the pandemic, took a more liberal, measured approach than many of its neighbours and which, since 1949, has tended to uphold constitutional freedoms to a laudably high degree. 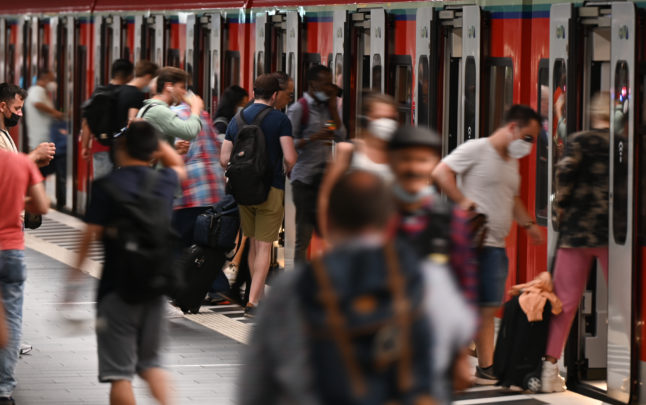 People get on and off an S-Bahn train in Frankfurt, with many people wearing masks. Photo: picture alliance/dpa | Arne Dedert

Politics in favour of 'hardcore' restrictions

So why do we still have patently pointless busy-body laws? The first answer to that is: politics. In the coalition, two of the parties – the SPD and the Greens – are wedded to hardcore restrictions, trying to delay their removal in March and inserting back-doors for the states to keep them in place; it was only thanks to the FDP that there was any loosening at all, and to get rid of the bulk of restrictions elsewhere, they opted to sacrifice mask-free public transport use. (Their core voters are car-drivers). As with all bad compromises, however, no-one is satisfied – and everyone is gearing up for negotiations on what replaces the current fudged legal framework for remaining restrictions when it expires on 23rd September.

Beyond the inevitable spat between a bullish FDP and panic-stricken SPD and Greens, the political problem in Germany is broader. The legislative instrument up for renewal is termed Infektionsschutzgesetz – literally: ‘infection protection law’ – while the state-level restrictions derived from it are called SARS-CoV-2-Eindämmungsverordnungen, which means ‘statutory orders to halt the spread of SARS-CoV-2'. As such, the political debate in Germany is still being held on the premise that we are able to control the spread of coronavirus and that there are state interventions which can prevent it from infecting the entire population.

In most other European countries, the Omicron wave led to the realisation that it was no longer possible to stop Covid spreading without opting for Chinese-level lockdowns – and to a slightly risky, yet thus far broadly successful strategic switch towards, on the basis of broad vaccination, using the milder variant to build up herd immunity at a lower cost in terms of sickness. While it is easy to understand just how difficult a plunge this is to take – applied too early (i.e. before inoculation), the herd immunity strategy was the reckless hallmark of Johnsonian/Trumpian policy – the facts of the matter are plain to see. Accordingly, from ex-WHO SARS research coordinator Klaus Stöhr to Andreas Gassen at the GP association, there is no shortage of epidemiologists and medical professionals in Germany arguing that now is the time. 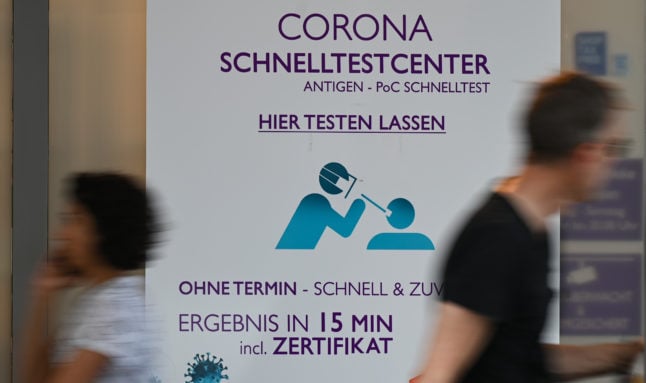 It isn’t the time, though, because – and this is the issue – Germans aren’t ready. That’s the other reason we still have these pointless busy-body laws: because the populace is willing to abide by them. Part of the reason the UK got rid of re-imposed coronavirus restrictions for good in February was because compliance was so low as to make a mockery of them: in a country where ONS statistics estimate that 90 percent of the population has already had Covid and where mortality has plummeted, people no longer see the point in protecting themselves; ditto across the Channel, where, after complying to a surprisingly high degree with the excessive regulations in 2020, the French rediscovered their Gallic shrug this spring once they’d all had the disease.

We Germans, of course, are different. There has been no shortage of ink spilled on our national willingness to comply with even obviously pointless regulations and on our communal love of policing each other’s conduct (least of all by me). The problem with corona is that our notorious obsession with compliance is multiplied by another of our national traits: hypochondria. German sensitivity to illness has its good sides – even before Covid, we didn’t go into the office or to parties with streaming colds – but can, like all worthy characteristics, become pathological.

As political parties well know, a majority of Germans is still terrified of corona and has now come to view others’ mouths and noses primarily as a source of danger. After sandals at swimming pools, towels in saunas, and removing shoes at apartment doors, masks are now the next behavioural modification Germans are willing to make – and enforce – in their quest for marginally improved hygiene.

The stress, of course, is on ‘marginal’. As last week’s report on government restrictions underlined, masks can be a useful tool in stopping the spread of respiratory illness – provided, of course, they are worn properly and continuously. Germans beloved FFP2 masks do not seem to offer much more protection than other forms of face coverings. So forcing restaurant diners to put on a specific type of mask from the door to their table, where they then remove it to eat, drink, and be merry, is an exercise in pointlessness. Ditto on trains, where people also eat and drink (not least in the BordBistro…).

Of course, we didn’t really need an expert commission to tell us this: it is borne out by the fact that Germany’s highest ever rates of infection were back in March, when – along with a whole other range of bewildering regulations (anyone remember “2G+”?) – mask-wearing was in force and, moreover, while even famously light-touch Sweden (with whom our per-capita death rate is comparable) had absolutely no restrictions and an exceptionally low case-load. 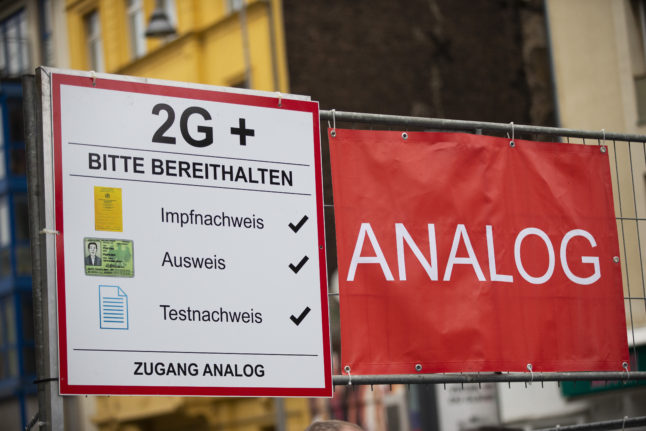 A sign at the Cologne carnival in February 2022 saying entry is '2G-plus' - only for vaccinated/recovered people who can show a negative test, or boosted people. Photo: picture alliance/dpa | Thomas Banneyer

This and other glaringly obvious incongruities, however, won’t stop German Health Minister Karl Lauterbach and his like from trotting out their tired mantra that a high seven-day incidence means that restrictions are needed (regardless of hospitalisation or the overall burden of illness) and that restrictions must mean masks. It won’t stop Germans from agreeing with him, either: our unappealing assumption that we know best means that, rather than asking why our death rate is so high after two years of uninterrupted Covid restrictions of one form or another, we simply assume that neighbouring countries must somehow be wrong.

So expect plenty more exercises in cross-border train-travel pointlessness – along with the widespread re-imposition of indoor mask-wearing, hand-disinfection, and testing requirements this autumn. When it comes to coronavirus, it’s Groundhog Day in Germany – and, really, our time loop is stuck somewhere back in 2020/21. The train to 2022 leaves from Cologne every two hours at 42 minutes past.