A view of the Frankfurt skyline. Frankfurt is in the top 10 of the world's most liveable cities, according to a new ranking. Photo: picture alliance/dpa | Hannes P Albert

The financial hub is the only German city to make the top 10 in the annual ranking by the Economist Intelligence Unit (EIU).

Frankfurt climbed 32 places from last year’s annual liveability index to snag the seventh spot. Other German cities soaring higher up to make the top 25 of the most liveable places were Hamburg (16th) and Düsseldorf (22nd).

Frankfurt am Main climbed 32 places to 7th in the @TheEconomist's annual liveability index, the highest placed German city in this year's ranking. Hamburg (16th) and Düsseldorf (22nd) also featured in the Top 25. pic.twitter.com/DCbYmj4hHS

Vienna, the capital of neighbouring Austria, took the top spot in the ranking by the EIU, the sister organisation of the Economist.

Wien took the number one position from Auckland in New Zealand, which fell down to 34th place due to coronavirus pandemic restrictions.

“Vienna, which slipped to 12th place in our rankings in early 2021 as its museums and restaurants were closed, has since rebounded to first place, the position it held in 2018 and 2019,” said the ranking.

Frankfurt – often dubbed Mainhattan thanks to its towering buildings – is known for being the financial capital of Germany. But it also has a buzzing social scene, with a large selection of bars and restaurants.

The Local readers recently told us how cosmopolitan Frankfurt is.

“Frankfurt really offers the best aspects of a large megacity like NYC, London or Paris on a much smaller scale – so it offers world-class shopping, cuisine and amenities without overwhelming crowds,” said reader Michael Schacht, 31. “It’s super multinational as a result.”

READ ALSO: ‘A megacity on a small scale’: An insiders’ guide to Frankfurt

Others said Frankfurt airport, which is Germany’s largest, offers lots of international connections which makes it a big draw for foreigners.

The annual ranking of the world’s most liveable cities did not include the Ukrainian capital Kyiv this year after Russia invaded the country in February.

The Russian cities Moscow and St Petersburg fell in the rankings due to increased government “censorship” and the impact of Western sanctions.

The EIU ranked 173 cities around the world on several factors, including health care, crime rates, political stability, infrastructure and access to green space.

Germany’s €9 monthly ticket, which launched in June, is also available throughout the whole of July and August. It can be used on all local transport across the country, as well as on regional trains.

If you’re based in Frankfurt, or heading there on holiday, these destinations can all be reached on regional transport in under two hours, making them an ideal day or weekend getaway. 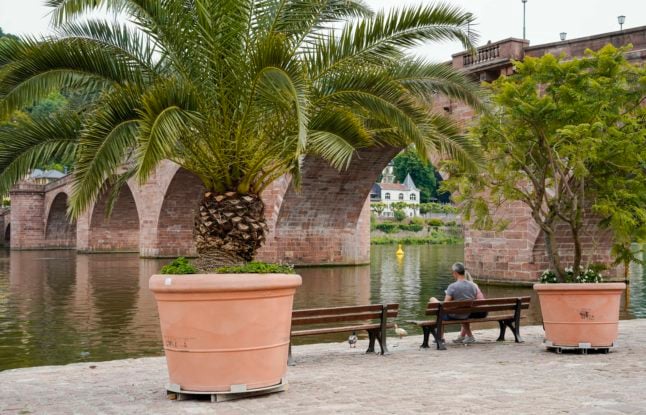 People sit in front of the Old Bridge at the Neckar river in Heidelberg. Photo: picture alliance/dpa | Uwe Anspach

With its arched Old Bridge and castle on the hill, it’s no wonder Heidelberg is known as one of Germany’s most romantic destinations. The castle, which dates back to the 13th century, was even immortalised by English romantic painter William Turner in a famous painting from the mid-19th century.

Stroll the winding gothic streets, pay a visit to Germany’s oldest university and visit have a coffee in the historic centre which still bears witness to the medieval layout of the city. 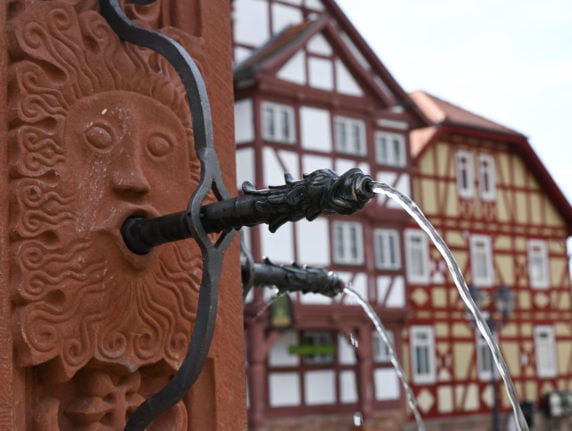 Historic half-timbered houses and an old fountain in the market square of Hessenpark, a popular excursion destination in the Taunus region. Photo: picture alliance/dpa | Arne Dedert

Take a step back in time in this fascinating open-air museum. With over 100 reconstructed historic buildings across 160 acres, the park gives visitors a close-up look at 400 years of rural life in Hesse.

Amongst the highlights are the market place which boasts buildings from the whole state of Hesse; a 15th-century church and an austere school room from the turn of the 20th century.

With lively demonstrations of crafts and agriculture, exhibitions, colourful markets, the museum theatre and themed tours, a trip to Hessenpark makes a great day out for all of the family.

To get there, take the RB15 from Frankfurt Hauptbahnhof to Wehrheim Bahnhof and from there, hop on the 63 bus to Neu-Anspach-Anspach Hessenpark. In total it should take you 1 hour and 15 minutes. 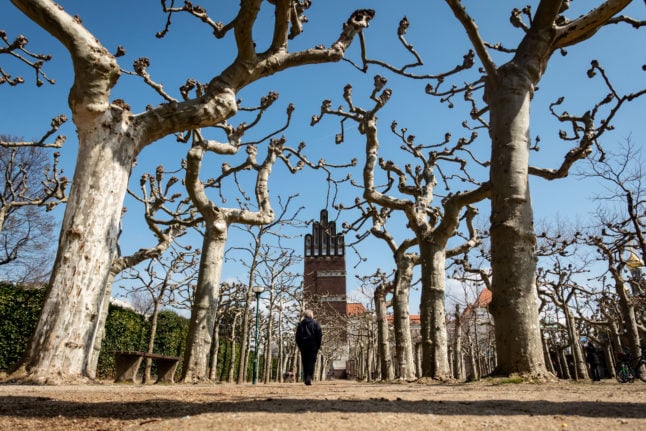 A day trip to Darmstadt is a must for art and architecture lovers, as Hessen’s fourth-biggest metropolis is home to some particularly interesting cultural sights.

The former artists’ colony on Mathildenhöhe, now a UNESCO World Heritage site, is one of the most important Art Nouveau sights in Germany and the Wedding Tower and the wacky ‘Waldspirale’ (forest spiral) are well worth a visit.

Also on Mathildenhöhe is the richly decorated Russian Chapel where one of the sisters of Grand Duke Ernst Ludwig married Nicholas II, the last Russian Tsar.

You need only half an hour to reach Darmstadt, with a direct ride on the S3 from Frankfurt (Main) South station. 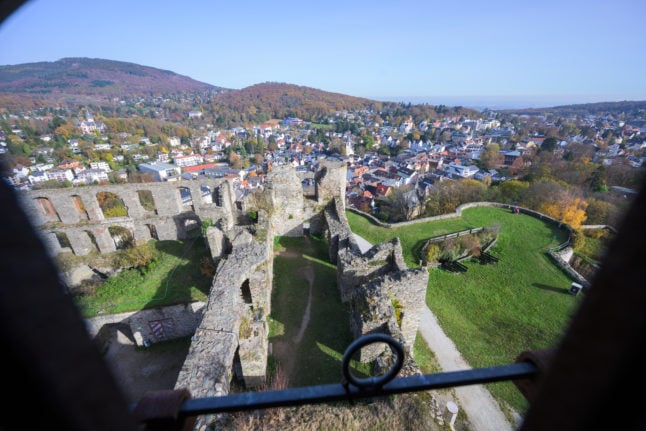 The Königstein castle ruins are a landmark. They are among the largest castle ruins in Germany. Photo: picture alliance/dpa | Andreas Arnold

At an altitude of around 300 metres on the wooded slopes of the Taunus lies the health spa town of Königstein.

Königstein has been a climatic health resort since 1935, thanks to the purity of the air in the region and is home to various health clinics.

Daytrippers can soak up the tranquillity in the parks or in the picturesque city centre.

The ruins of Königstein Castle, which date back to the first half of the 12th century, are also well worth a visit.

There are several routes to get you to Königstein from Frankfurt Hauptbahnhof in under 50 minutes, the fastest being the S5 to Oberursel, followed by the X26 bus to Königstein. 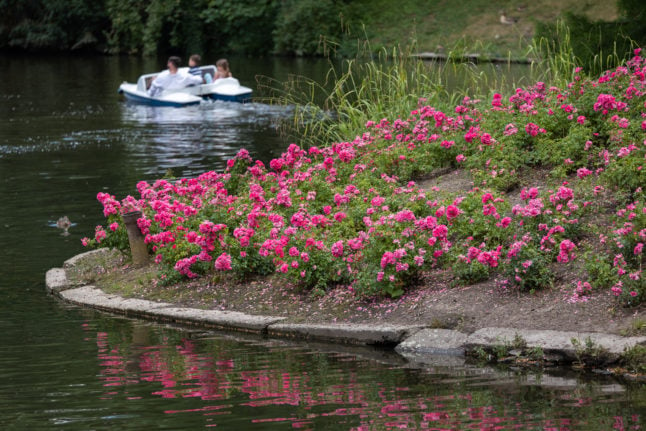 ​​Nestled in a beautiful valley between the Rhine and the mountains of the Taunus lies Hesse’s capital Wiesbaden.

There are plenty of things to see on a day trip to the city, including the English-style landscaped garden of the Kurpark, the neo-Gothic Market Church on Schlossplatz and the Hessian State Museum.

Those who fancy trying their luck should pay a visit to the Casino Wiesbaden – one of Germany’s oldest casinos in the former wine salon of the Kurhaus.

Wiesbaden is also known for its thermal baths and no trip is complete without a hot tub and sauna visit.

READ ALSO: Weekend Wanderlust – Getting my feet wet in. Wiesbaden

You only need around 50 minutes to reach Wiesbaden from Frankfurt Hauptbahnhof with the S1 or S9 to Wiesbaden central station. 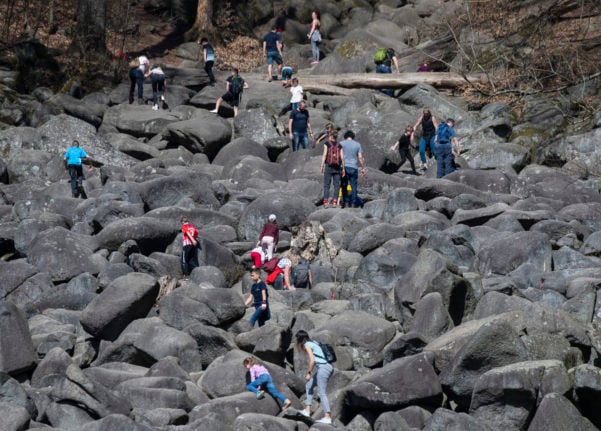 Hundreds of visitors climb over the rocks of the Felsenmeer , which is a popular attraction in the Odenwald. Photo: picture alliance/dpa | Boris Roessler

Around 60 kilometres south of Frankfurt is a true natural wonder that will delight nature lovers of all ages.

The Felsenmeer, which literally translates as ‘rock sea’ is a mass of boulders across Felsberg in Oldenwald. The rocks are hundreds of millions of years old, and at the information centre at the foot of the hill, you’ll find all the geological, historical and practical information you need to make the most of a hike through the sea of rocks.

At the top of the hill, you can reward your exertions with a tasty snack at the kiosk on the summit.

A trip to the Felsenmeer will take you around an hour and 40 minutes with the RB82 from Frankfurt Hauptbahnhof to Reinheim Bahnhof, followed by the M02 bus to Reichenbach, Felsenmeer. 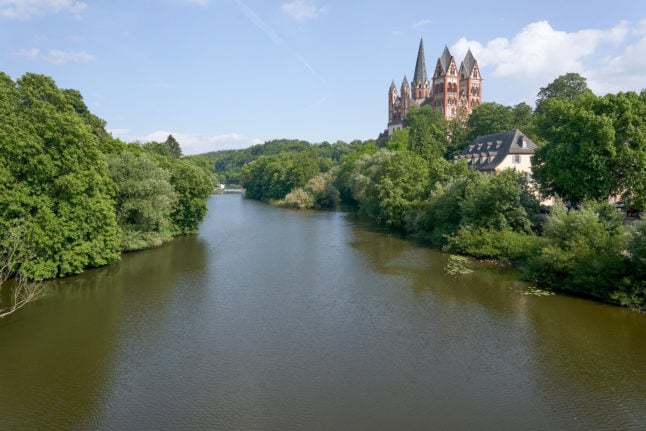 A view of the Lahn river and the cathedral in Limburg. Photo: picture alliance/dpa | Thomas Frey

A visit to Limburg in the west of Hesse, is a bit like travelling back in time to the Middle Ages. There are dreamy castles, palaces, charming half-timbered houses and ancient legends swirling around the city’s cobbled streets.

A particularly visit-worthy ancient relic is the imposing St. Lubentius Basilica. Perched on an outcrop of limestone rocks on the west bank of the Lahn river, it was the region’s most important church until the 13th century.

You can reach Limburg in just over an hour with the RE20 from Frankfurt Hauptbahnhof. 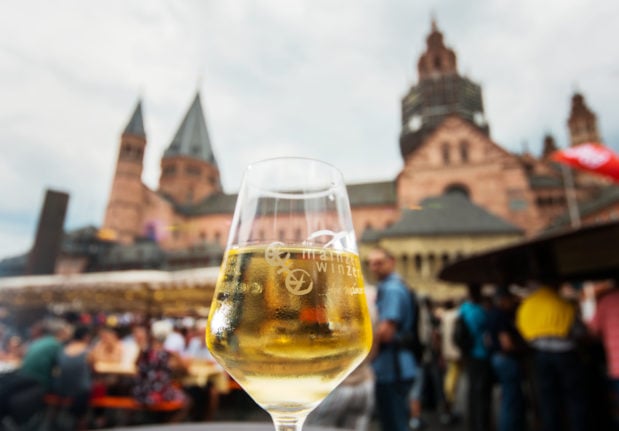 A glass of wine stands on a table near the cathedral in Mainz during the Johannisnacht festival in 2019 held in honour of Johannes Gutenberg. Photo: picture alliance/dpa | Andreas Arnold

A short train ride away from Frankfurt, you’ll find the city of Mainz on the Rhine River. Known as Germany’s wine capital, there’s plenty to explore in the cobblestone streets of the Altstadt. Mainz has a steep history after being founded by the Romans.

For more than 1,000 years, the city’s skyline has been dominated by the cathedral.

We’d also recommend checking out the the Gutenberg Museum – one of the oldest museums of printing in the world. And of course, make sure to visit a little wine bar – known as a Weinstube.

Get to Mainz by taking the RE4 from Frankfurt Hauptbahnhof.  It takes just over 30 minutes. 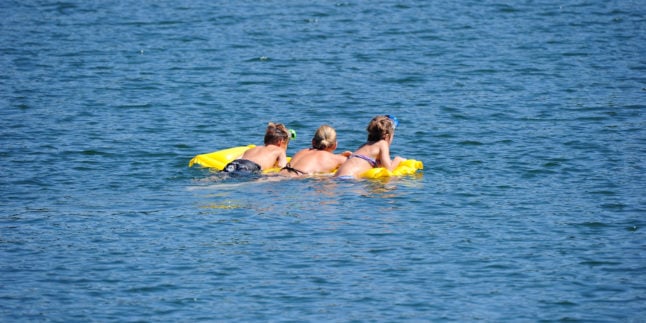 What better way to cool off this summer than to head to a lake? The beautiful Walldorfer See, south of Frankfurt, is known for being a little less busy and calmer than the nearby Langener See, which is the biggest lake in the region.

On the southern shore at the entrance is the large sandy beach which has a snack bar, toilets, plus a beach volleyball and barbecue area. You can also explore the forest around.

Keep in mind that the lake is near the airport so you will also see some planes overhead (which might be fun, especially if you have kids with you!).

Get there on the S7 or RE70 from Frankfurt Haubtbahnof, and then jump off at Walldorf (Hess), and get the the 67 or 68 bus in the direction of Frankfurt airport to Mörfelden-Walldorf-Egerländer Straße. It’s then an 18 minute walk to the Badestelle Walldorfer See.

With reporting by Rachel Loxton