Germany has been struck by weather extremes over the past few days, with record-breaking heat of up to 39C followed by rainstorms and cooler temperatures.

While firefighters in Brandenburg battled to douse a raging forest fire on Monday, parts of Bavaria were hit by sudden storms that left a trail of wreckage in their path.

Freising to the north of Munich was one of the districts that was caught in a sudden thunderstorm on Monday.

According to the district office, a cyclist from Baden-Württemberg was killed when a tree fell in the storm, a 15-year-old pedestrian and car driver were left with severe injuries.

Police helicopters and water rescue teams were also dispatched to search for a woman who they believed had been caught by surprise while bathing in a lake near Moosburg but were unable to find her.

Thousands of homes were also left without electricity when the storm damaged parts of the high-voltage grid that runs from Munich to Uppenborn via Moosburg. A spokesperson for Stadtwerke München (SWM) told BR24 that on Tuesday morning an estimated 13,000 people were temporarily without power.

The village of Großaitingen to the west of Munich was one of the places to be worst-hit in the shock thunderstorm.

The storm tore holes in the roofs of several houses, and the ridge of St. Nicholas Church had to be secured with the help of a crane because roof panels had come loose.

There were also reports that entire rows of trees had been ripped up by their roots and that sports fields and construction sites were left in chaos. Around 140 volunteer firefighters were called out to fix tiles on roofs and clear away fallen trees. 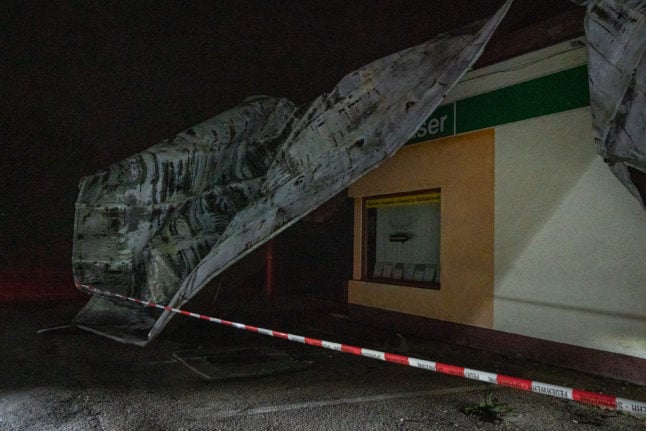 A tin roof is ripped off a building the district of Freising, Bavaria, on June 20th, 2022. Photo: picture alliance/dpa | Armin Weigel

Speaking to BR24 in the aftermath of the storm, Großaitingen resident Claudia Wiedemann described a sudden burst of rain and hail that lasted about ten minutes and destroyed a linden tree at the entrance to her farm.

“There’s never been such devastation in the village before,” another resident said.

Local police services said that Landshut to the northeast of Moosburg was also badly affected by the storm, with residents reporting seeing trees ripped out of their roots and traffic signs blown over.

According to a spokesperson for the local police force, 14 tree trunks had to be cleared out of the road.

One resident also reported that their skylight had been smashed by large hailstones.

As of Tuesday, train services between Landshut and Freising were still disrupted. Operators said a rail replacement bus service was in place.

The German Weather Service (DWD) had previously set a Stage 4 warning – the highest level possible  for parts of Upper and Lower Bavaria due to the threat of extreme storms.

Over the next few days, the DWD predicts that there could be repeated thunderstorms throughout Bavaria – in some cases with heavy rain, hail and gale-force winds of up to 80 kilometers per hour.

In the rest of the country, there will be sunny spells with temperatures of between 27 and 30C as well as occasional rain and thunderstorms.

These are likely to strike across western Germany on Thursday and spread to Bavaria again on Friday. The northeast, meanwhile, could see more heavy rain before sunshine and warm weather returns across Germany on Saturday.