People cool down in the Isar river in Munich on Sunday. Photo: picture alliance/dpa | Peter Kneffel

A heatwave gripped parts of Europe and Germany over the weekend, resulting in sweltering heat.

However, there was a major drop in temperatures on Monday with rain and storms.

On Sunday, the German Weather Service (DWD) recorded readings of 38C – and more – at several weather stations in Thuringia, Saxony and Brandenburg in the afternoon.

In Cottbus, a new Germany-wide temperature record of 39.2C for the second part of June was measured.

The preliminary reading at the station in the eastern Brandenburg city of Cottbus exceeded the previous high by almost one degree.

Earlier in the afternoon on Sunday, the highest temperatures of the year to date had been recorded at the stations Waghäusel-Kirrlach on the Upper Rhine (Baden-Württemberg) and in Bad Kreuznach (Rhineland-Palatinate) with 37.1C.

The mercury in many other parts of Germany also spiked upwards – reaching just under 38C. In a strip taking in the Upper Rhine in Baden-Württemberg through southern Hesse and Bavaria to southern eastern Germany, temperatures of 35 to 37C were recorded at 3pm, according to the DWD.

The heat resulted in two large forest fires breaking out in Treuenbrietzen and Beelitz, which are both in the Potsdam-Mittelmark district. Hundreds of people had to be evacuated from their homes as a safety measure.

An area the size of almost 300 football fields was on fire, authorities said. More than a thousand firefighters were deployed to try and get the blaze under control.

Heavy rain on Sunday night and on Monday provided some relief. Rain and storms were to continue throughout Monday, said the DWD.

“The fire is under control, but not yet extinguished,” the city of Beelitz said on Monday morning. “Even though the current rain is helping us a lot, there may still be heavy smoke.”

Authorities urged locals to stay indoors and keep their windows and doors closed to avoid the smoke. 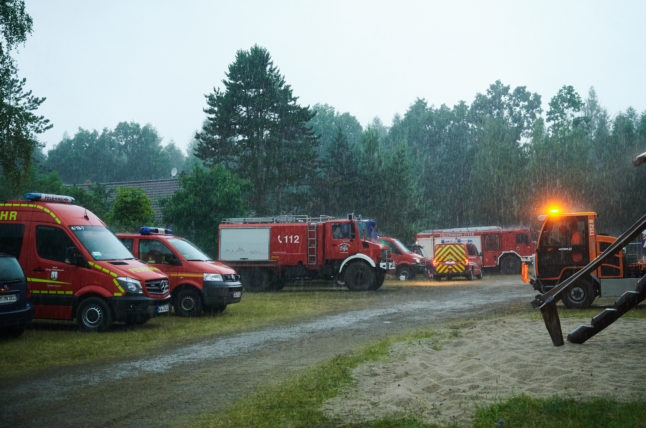 Despite the heat in some parts of the country, northern Germany escaped high temperatures.

In Lower Saxony and Schleswig-Holstein, for instance, it was around 12 to 15C on Sunday. In North Rhine-Westphalia, too, the mercury reached about 20C – far lower than other parts of the country.

According to the DWD, the week starts with showers and cooler temperatures in large parts of Germany. In the west and north, it will begin with cloudy and sunny spells, while in the northeast there may be isolated showers and short thunderstorms.

That will continue before warmer temperatures return near the end of the week, reaching over 30C in some areas, and accompanied by a strong chance of thunderstorms.