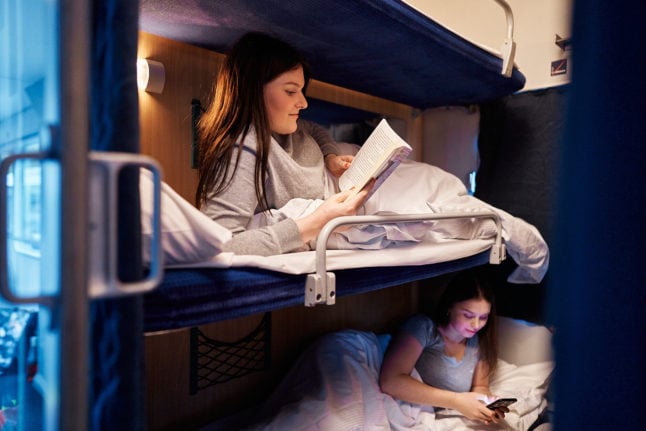 To women in a couchette on the night train from Sylt to Salzburg. Photo: picture alliance/dpa/RDC AUTOZUG Sylt GmbH | Lars Franzen

If you’ve caught the train travel bug with the €9 ticket this summer, you may be pleased to find out that you can go even further afield on a variety of night trains (though not with the €9 ticket since that only covers public transport!).

Though Germany’s main train provider, Deutsche Bahn, put their night trains on ice back in 2016, there are plenty of other train providers whose sleeper trains offer a green alternative to flying for European city breaks.

When Deutsche Bahn stopped running night trains back in 2016, the Austrian Federal Railways (ÖBB) stepped in to fill the gap with its own Nightjet service.

ÖBB is currently the night train market leader in Germany and operates ten routes through Germany, with stops including Wroclaw, Milan, Rome, Venice, Vienna and Zurich. 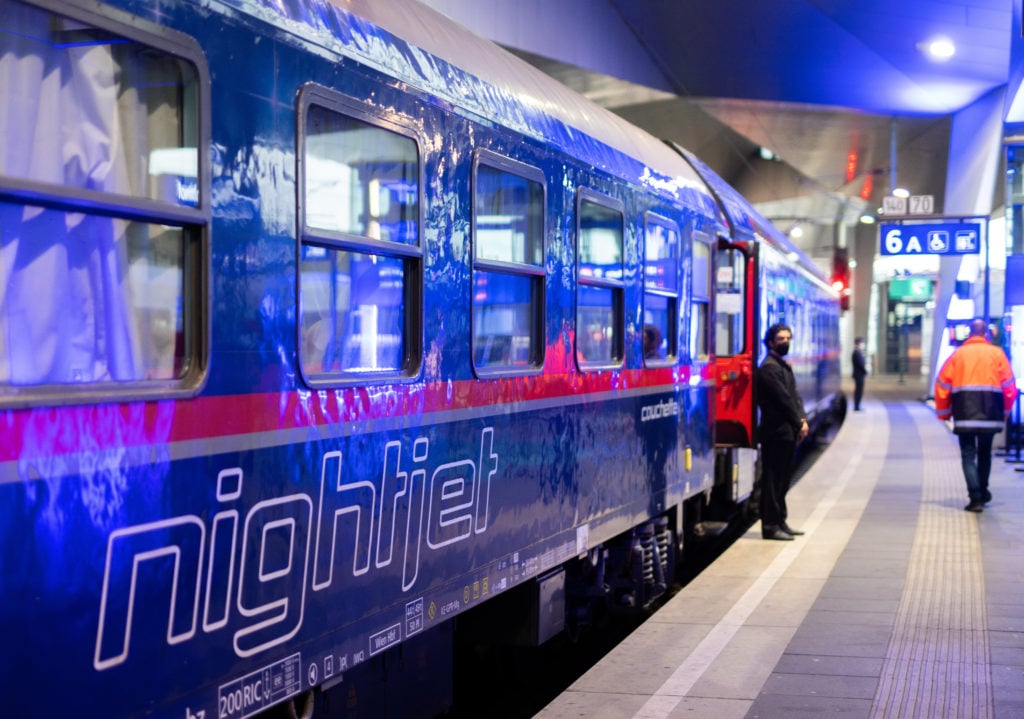 A Nightjet train stands on the track at the main station in Vienna in 2021. Photo: picture alliance/dpa/APA | Georg Hochmuth

At the start of 2022, they introduced the Zurich – Cologne – Amsterdam, and Vienna – Munich – Paris routes.

The routes Berlin – Brussels, and Berlin – Paris are planned for the end of 2023, and Zurich – Barcelona is planned for 2024.

Prices range from the economy fare, for just a seat, from as little as €30 (if you book well in advance) to around €200 for a couchette (a semi-private or private compartment with beds) with a shower and toilet.

From Bad Bentheim, a Green Citytrip train will get you to Copenhagen, Malmö, and Gothenburg, and from Dortmund you can travel directly to Prague. 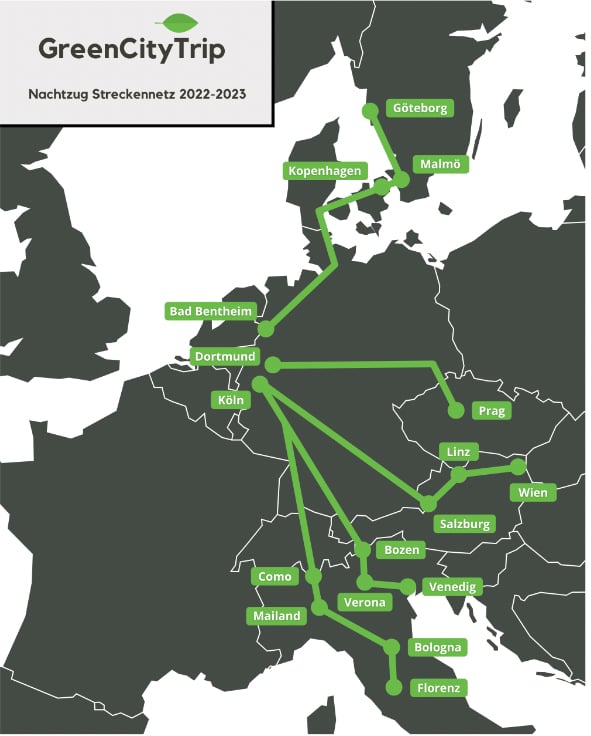 It’s currently not possible to book a one-way ticket, and the prices shown on the Citytrip website are for round trips of five days: departing on the first day of travel in the evening and arriving back in Germany on the fifth travel day in the morning. Current prices for a round trip start at €189.

From Sylt overnight to Salzburg

Another privately operated night train with sleeping and couchette cars is the Alpen-Sylt-Nachtxpress.

The train usually runs on Thursdays and Saturdays from Sylt to Salzburg and Constance, and on Fridays and Sundays in the opposite direction. It makes stops in Niebüll, Husum, Hamburg, Hanover, Göttingen, Frankfurt, Nuremberg, and Munich, among other places. Timetables and the complete route network are available on the train line’s website.

An economy price seat booked in advance can get you all the way from Sylt to Salzburg for just €29, while the cheapest sleeping option is €39. Women passengers can reserve their individual couchette in the ladies’ compartment at no extra charge.

This Swedish train operator rolls from Berlin and Hamburg via Denmark to Sweden. The night train leaves Berlin in the evening and travels via Hamburg, the Copenhagen region, Öresund and Malmö up to Stockholm. According to the timetable, the journey takes around 19 hours. 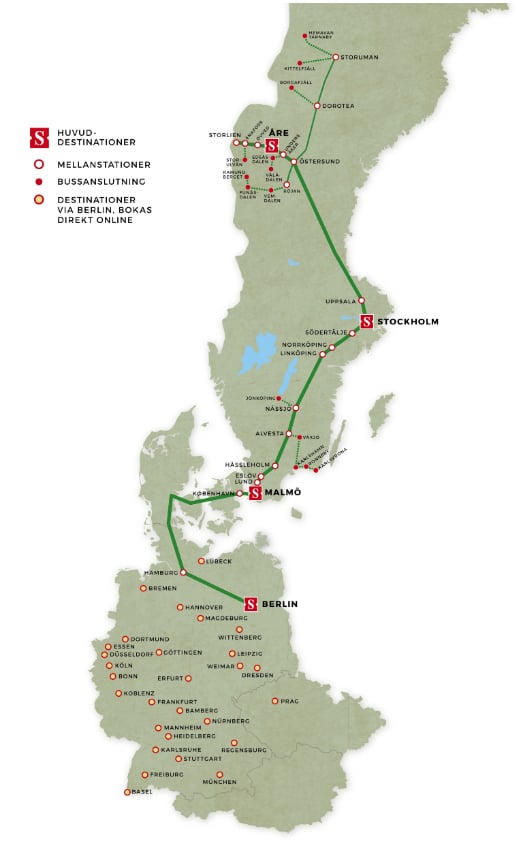 Starting in 2022, there will also be selected services running from Dresden to Stockholm and vice versa.

Prices vary depending on the ticket (private compartment, comfort reclining seat, normal seat). The compartment is around €300 each way and normal seats cost at least €50.

Are Deutsche Bahn likely to relaunch their night trains?

Deutsche Bahn no longer has its own couchettes, but it does offer nighttime IC and ICE connections with seats. Among other destinations, these trains take passengers from Rostock and Waren (Müritz) overnight directly to Vienna. From Kiel, the trains go via Osnabrück to Munich, and from Hamburg there are direct connections to Copenhagen, Basel, and Zurich.

For now, it seems that Deutsche Bahn doesn’t seem to have plans to relaunch its trains with sleeping facilities, but rather to cooperate with other railway companies such as ÖBB,  Swiss Federal Railways (SBB), France’s SNCF, and Dutch company Nederlandse Spoorwegen (NS). 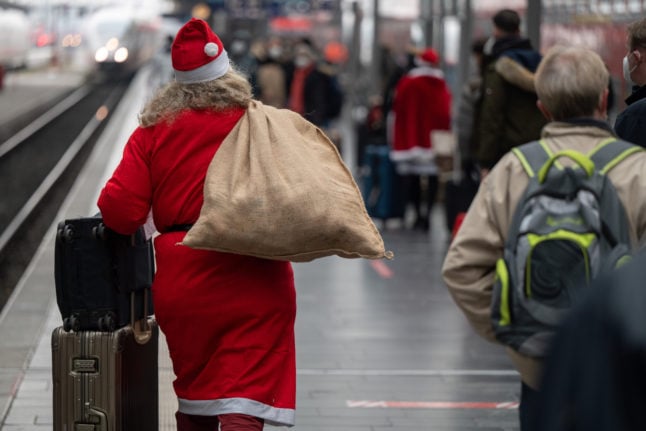