Germany's €9 monthly ticket launched on Wednesday, offering cheap transport to everyone for three months over summer.

More than seven million people bought the €9 ticket ahead of the official launch on Wednesday, leading German Transport Minister Volker Wissing to call it a "success project".

The ticket is available to buy across the country, and people can use it on all local transport networks and regional trains.

The heavily discounted monthly ticket is aimed at relieving consumers of the rising costs of living, particularly energy prices.

It is also being seen as an experiment in the fight against climate change - with the hope that the offer will convince more people to leave their cars at home.

Berlin-based travel expert Jon Worth told The Local: "The €9 ticket is an extraordinary experiment that is a result of a political compromise. In the coalition government the liberals (FDP) demanded assistance for car drivers hit by higher petrol prices, and the greens (Grüne) said ‘what about public transport users?’ - this is the result.

"At one level this is a thank-you for public transport users, a kind of reward for them for three months. That is welcome."

However, Worth pointed out that it's unclear how the €9 ticket will affect demand for public transport. There are fears that popular routes will be packed. 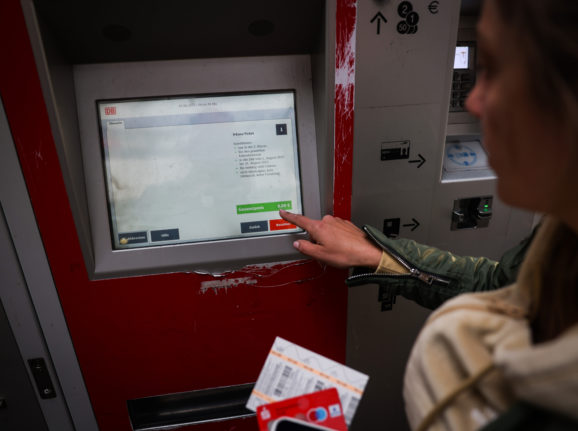 "Some comparatively long journeys that were quite costly - like Berlin to Görlitz or Hamburg to Westerland (Sylt) - suddenly become very cheap," he said.

"Supporters of the ticket see this as a great opportunity, but critics say it will lead to overcrowded trains."

Worth said he was going to buy the ticket himself and will use it "to explore all the parts of Brandenburg and Sachsen (Saxony) I have not yet visited".

"I am not sure that is what the ticket was designed for, but hell, at a price this low, why NOT buy one?" he said.

The ticket will be available from June to the end of August, and it can be used on all local public transport in Germany – including buses, underground trains and regional trains. It costs €9 per calendar month or €27 for the whole period. It’s not valid on long-distance transport like high speed ICE trains and Flixbus services.

The Association of German Transport Companies (VDV) estimates that around 30 million people per month will take advantage of the offer - either through their subscriptions or with a newly purchased ticket.

"Our wish is that we not only gain and also retain many new customers, but that we can make public transport attractive in the long term," Bremen's transport senator and chair of the Conference of Transport Ministers (VMK), Maike Schaefer (Greens), said on Tuesday ahead of the launch.

Dortmund-based transport expert Dr. Giulio Mattioli told The Local that he had mixed feelings about what the ticket will achieve.

"On one side there's a climate emergency - anything that goes towards encouraging public transport use and getting people to shift from car to other modes is to be welcomed," he said, adding that there's "certainly much that can be done to make public transport more affordable and for low income groups in particular".

However, he pointed out that the measure could be seen as a gimmick because it came about from the debate over cutting fuel tax, and it still isn't clear whether travel will continue to be cheaper after the three-month offer period ends.

"It doesn't seem to be part of a coherent policy or strategy about public transport," he said.

Mattioli said if the focus is on increasing public transport use in Germany "we should rather be talking about investment, further development of the network, and better reliability of the network rather than prices".

"Because what we know from transport research is the main reasons why people use cars rather than public transport is convenience," he said.

Mattioli said he wasn't too hopeful that the deal would result in a "big model shift" but said it could convince some regular car users to try public transport out.

The Local's columnist Brian Melican also questioned whether the €9 ticket was the right solution for Germany.

In an opinion piece, he suggested: "In terms of putting money in people’s pockets, but doing it in a sensible, targeted way, why not introduce the €9 ticket for low-income households, and/or specifically for groups such as students and pensioners – but do so on a permanent basis?"

However, public opinion is in favour of the measure. The majority of The Local readers, for instance, said they support it. In a poll, 95.4 percent of respondents said they planned to get the ticket.