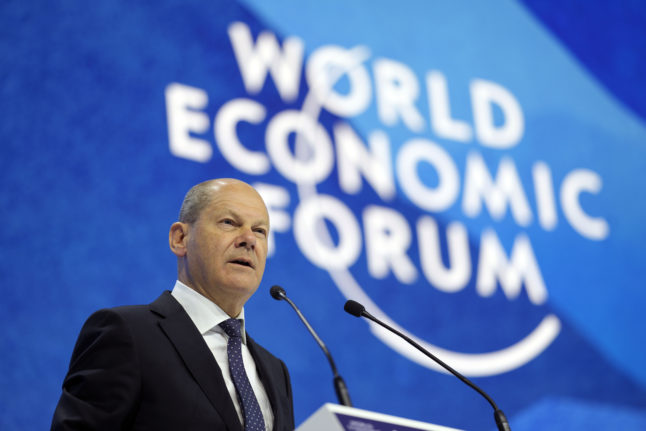 Russian President Vladimir Putin will not be allowed to dictate peace in a war that he “will not win” in Ukraine, German Chancellor Olaf Scholz said Thursday.

Putin has “already failed in all his strategic aims”, the German leader told the World Economic Forum in Davos. Russia’s plan to capture all of Ukraine is “further away today than it was at the beginning” of its invasion on February 24th as Ukraine put up an impressive defence.

Putin “underestimated” the “resolve and strength” of allies in countering his aggression in Ukraine, said Scholz, noting that Moscow has also now pushed Finland and Sweden to join the NATO defence alliance.

“Our goal is crystal clear — Putin must not win this war. And I am convinced that he will not win it,” said the German chancellor. Scholz, who has spoken several times with the Russian leader on the phone since Moscow’s invasion, said “Putin will only seriously negotiate peace when he realises that he cannot break Ukraine’s defences.”

And Western allies, who have been arming Ukraine and imposing heavy sanctions on Russia, will continue their backing for Kyiv, he pledged.

“It is a matter of making it clear to Putin that there will be no dictated peace,” said Scholz.

“Ukraine will not accept that and neither will we.” Scholz however did not directly address criticisms from Ukraine that Germany was not moving fast enough in supplying Kyiv with heavy weapons.

He only said that Germany’s support for Kyiv will continue to be coordinated with allies and that it will not allow NATO to become a ‘party in the conflict’.

Ukraine has been urging Berlin to speed up deliveries of heavy armaments including Leopard tanks and Marder armoured vehicles.

In a separate session at Davos on Wednesday, Ukrainian Foreign Minister Dmytro Kuleba voiced frustration over the process: “I don’t understand why it is so complicated, but I respect the situation in the German government and we are looking forward to see how this story ends.”

Kyiv mayor Vitali Klitschko also noted at the economic forum in the Swiss ski resort that “everything works so slow” in terms of weaponry decisions.

“We need fast decisions with the weapons because I want to repeat one more time, we are defending not just our country, our families, our children, we defending every one of you.”

The Group of Seven leaders will “task ministers to work urgently towards developing, consulting with third countries and the private sector in an effort to develop a price cap around oil”, a senior US official told reporters.

The goal of the plan is to starve the Kremlin of its “main source of cash and force down the price of Russian oil”, the official said.

The official announcement is expected to come in the final communique later as a three-day G7 summit in the Bavarian Alps draws to a close.

The United States has led the push for an oil price cap at the gathering of the club of rich nations — which also includes Britain, Canada, France, Germany, Italy and Japan.

The move is designed to place Vladimir Putin’s regime under increased economic pressure and to punish the hostile nation for its ongoing invasion of Ukraine.

“There is consensus emerging… that the price cap is a serious method to achieve that outcome,” President Joe Biden’s national security advisor, Jake Sullivan, told reporters at Germany’s G7 summit on Monday.

While the West has already imposed multiple layers of sanctions on Russia in response to Putin’s order to invade Ukraine in February, the targeting of the oil industry represents the highest economic stakes so far.

The idea is that consumer countries would effectively set a low price for Russian oil, while Moscow, needing the revenue, would have no choice but to accept.

There are major questions, however, about unity among consumer countries and whether Russia really would cave in or instead might retaliate by cutting energy supplies to Europe.

Energy exports are Russia’s biggest revenue earner, while Western countries are among those most heavily dependent on imported oil and gas.

According to Sullivan, the main obstacle to the idea is not so much willingness to go ahead but sorting out the immensely complex logistical and technical aspects.

“The single biggest factor here is that this is not something that can be pulled off the shelf,” Sullivan said.

“It is a new kind of concept to deal with a particularly novel challenge, which is how to effectively deal with a country that’s selling millions of barrels of oil a day and (to) try to deprive it of some of the revenues.”

With soaring fuel prices at the heart of painfully high inflation in Germany and other G7 countries, leaders want to be sure that any oil price cap would also “minimise the spillovers and the impact on the G7 economies and the rest of the world.”

“The G7 leaders are going to acknowledge those two objectives and also acknowledge that the path forward is to urgently direct ministers to work on achieving a price cap which can, in our judgement, best achieve both of those objectives simultaneously,” the senior US official said.

The idea of price capping Russian oil — and also gas — has support from Italy and also France. 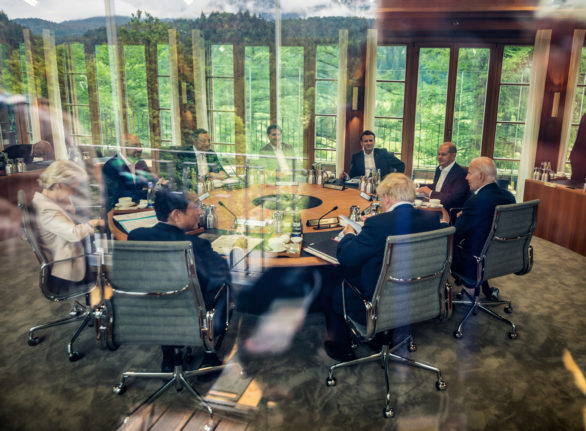 The French presidency has however said the measure would be “much more powerful if it came from the producing countries”, and that it was necessary to work with OPEC+ and other oil producers around the world.

The United States and Canada, which are far less reliant on Russia as an energy supplier, have banned all Russian oil imports. Europe is seeking to lessen its own reliance.

In another measure meant to punish Russia and increase assistance to pro-Western Ukraine, the G7 plans to turn funds raised in recently imposed trade tariffs on Russian exports into assistance for Ukraine.

G7 leaders “will seek authority to use revenues collected by any new tariffs on Russian goods to help Ukraine and to ensure that Russia pays for the cost of its war”, the senior US official told reporters.

A missile strike on a shopping mall in Ukraine’s Kremenchuk city, which occurred while leaders were meeting in Bavaria’s Schloss Elmau, also drew fierce criticism from the political leaders.

Russia’s “brutal” missile strike on the crowded shopping mall in central Ukraine constitutes a war crime, the G7 leaders said, vowing that Putin and those responsible would be held to account.

“Indiscriminate attacks on innocent civilians constitute a war crime,” the leaders said in a statement. “We solemnly condemn the abominable attack.”

Ukraine accused Russia of deliberately targeting civilians, with President Volodymyr Zelensky calling it “one of the most brazen terrorist acts in European history” in his evening broadcast posted on Telegram.

“A peaceful town, an ordinary shopping centre — women, children ordinary civilians inside,” said Zelensky, who earlier shared a video of the mall engulfed in flames with dozens of rescuers and a fire truck outside.

Russian missiles just hit a crowded shopping center in Kremenchuk, while over a 1,000 civilians were inside. The possible number of casualties is unimaginable pic.twitter.com/H0QiWzwefq

Alongside measures like the cap on oil, the leaders of the seven wealthy nations also discussed weapons deliveries to the Ukraine, the ongoing food crisis caused by the war, and measures to tackle climate change.

The industralised nations have pledged a total of $14 billion to help tackle food shortages and have called on countries to avoid stockpiling food in the wake of the crisis.

The war in Ukraine, a country known as Europe’s breadbasket, has pushed up food prices and led to shortages, as Russia’s blockade of Black Sea ports prevents millions of tonnes of grain from being shipped out.

This has led to fears of famine in developing nations as well as soaring prices in economies like Germany.

Addressing the leaders by video link, Zelensky had urged them to “intensify sanctions” to help end the war before the bitter winter.

“We will continue to provide financial, humanitarian, military and diplomatic support and stand with Ukraine for as long as it takes,” the G7 said in a statement on the summit’s second day.

Chancellor Olaf Scholz (SPD), who was hosting the summit, said on Monday that the Group of Seven would continue to turn up the heat on Putin in order to ensure a swift end to the war.

“As G7 we stand united on Ukraine’s side and will continue our support. For this, we all have to take tough but necessary decisions,” Scholz tweeted, thanking Ukrainian President Volodymyr Zelensky for addressing world leaders by video link.

“We will continue to increase pressure on Putin. This war has to come to an end.”