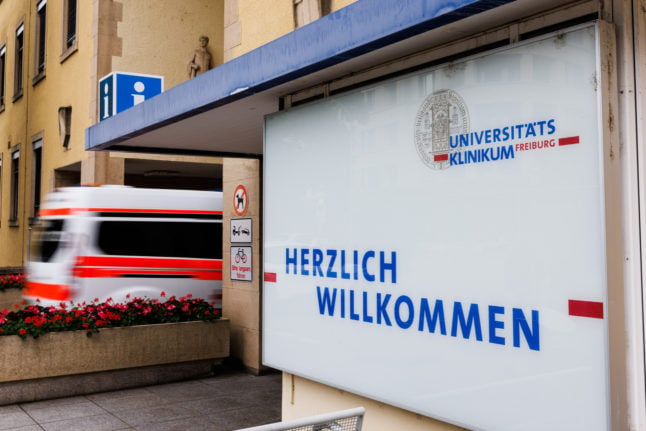 An ambulance drives in the grounds of Freiburg University Hospital where one patient with monkeypox is being treated. Photo: picture alliance/dpa | Philipp von Ditfurth

Klaus Reinhardt said he believed there should be an isolation period for those who contract monkeypox, a rare virus, which is normally found in West Africa, but which has recently emerged in Europe, Canada and Australia.

Reinhardt said the incubation period for the virus is three weeks. “That means that already a number of infected people don’t know it yet and so can spread the disease further,” Reinhardt told Südwestrundfunk radio on Tuesday.

In the UK and Belgium, people who have monkeypox are being asked to isolate for 21 days.

Six cases of monkeypox have been registered in Germany so far. The Health Ministry said it expects more cases to surface.

According to authorities, the virus usually causes only mild symptoms such as fever, headache, muscle pain and skin rash, although severe cases can occur. People who notice any skin lesions – a key symptom of monkeypox – are advised to see their doctor straight away.

One patient with the virus is being treated in isolation at Freiburg University Hospital. Authorities said the patient had recently returned from Spain and his condition is stable.

Cases have also been detected elsewhere in the country, including Munich and Berlin.

Reinhardt, who is the head of the German Medical Association, said he believed vulnerable groups should be vaccinated. Smallpox vaccinations are said to be very effective against monkeypox.

The German government said it was looking at options for vaccinations.

However, Reinhardt said there was no reason for people in Germany to panic. Unlike coronavirus, which spreads via airborne particles and droplets, monkeypox is transmitted primarily through close physical contact.

Health Minister Karl Lauterbach (SPD), together with Reinhardt and the President of the Robert Koch Institute, Lothar Wieler, were set to give an update on the situation on Monday. It’s expected that guidelines on how to deal with the virus will be released.

Experts say that many of the individuals who were confirmed to have the virus in Europe said they had recently had sexual contact with a new partner, which raises the likelihood that the recent monkeypox cases were transmitted sexually.

The World Health Organisation (WHO) says it believes there is no need for mass vaccinations against monkeypox.

The most important measures to combat the outbreak are tracing contacts and isolating infected people, said Richard Pebody, head of the pathogens team at WHO Europe. He added that vaccine stocks are relatively limited.

Measures such as “safe sexual behaviour, good hygiene, regular hand washing – all these sorts of things will help to limit the transmission of this virus” added Pebody.