Sunday’s vote in North Rhine-Westphalia is the third state parliament election to take place since last year’s federal election. But it’s a very different ballgame to the previous votes in Saarland or Schleswig-Holstein, primarily due to the large number of people going to the polls: 13 million people are eligible to vote in the state, which is why it has been dubbed a “mini federal election” by some.

NRW is Germany’s most populous state and is therefore a political force to be reckoned with, meaning that the outcomes of Sunday’s state election could have consequences for Berlin.

What’s the current situation?
Christian Democrat Hendrik Wüst currently leads the state after taking over last year when Armin Laschet resigned as state premier following his unsuccessful federal election bid. The CDU is in a coalition with the liberal Free Democrats after replacing the SPD-Greens coalition five years ago.

There are currently 199 ministers and five parliamentary groups represented in the Landtag, or state parliament, which is elected for a five-year term.

Is Wüst likely to hold on to the leadership?
It looks like it’s going to be a close race. The CDU and the Social Democrats are both polling at around 30 percent, with the CDU having a slight lead of two to four percentage points. Meanwhile, the FDP appears to have lost support.

The below table from DAWUM shows the results from recent polls. 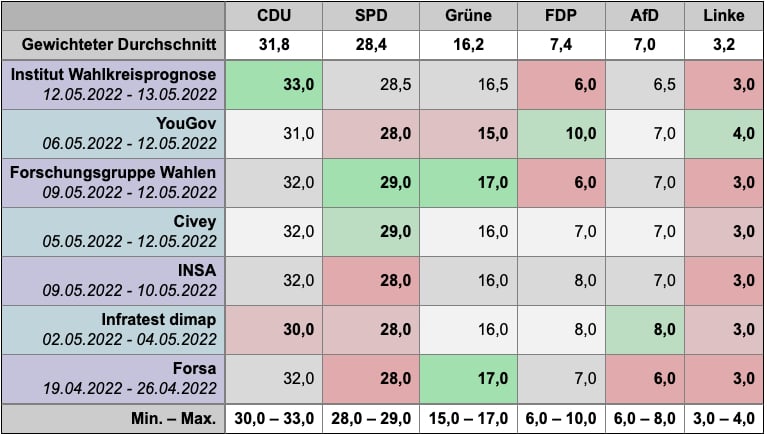 Who are the main players?
The two leading candidates are 46-year-old Hendrik Wüst (CDU) and 53-year-old Thomas Kutschaty (SPD). Both have previous government experience, Wüst as minister of transport and Kutschaty as minister of justice. The liberal FDP candidate is Joachim Stamp, Mona Neubaur is standing for the Greens and Markus Wagner for the right-wing AfD.

What were the main topics in the election campaign?
Covid-19 hasn’t gone away and the war in Ukraine has also featured heavily in the run-up to the election. Other subjects close to voters’ hearts include energy security amid the phasing out of coal and rising petrol and energy prices; climate change; education policy and affordable housing.

The election campaign has been marked by the ongoing discussion about Germany delivering weapons to Ukraine and the so-called Mallorca affair also heated things up. Environment minister Ursula Heinen-Esser resigned at the beginning of April after it emerged the CDU politician had met with other cabinet members in Mallorca to celebrate her husband’s birthday last July – this was just days after Germany’s flood disaster began.

The FDP and the Greens, meanwhile, are concentrating on issues such as economic policy and climate protection.

What are the implications for Berlin?
There’s a lot at stake here, especially for the CDU and SPD.

If the CDU were voted out of office in NRW, then the Union party would only have five out of 16 state premiers, while the SPD would lead a total of nine states, with one state head in NRW.

But if the SPD loses, this could be a confirmation of a downward trend after their major defeat in the Schleswig-Holstein election, where they suffered their worst ever result in the state. This could then also be attributed to Chancellor Olaf Scholz’ politics.

However, the CDU could ride on the momentum from their landslide win in Schleswig-Holstein and exert more pressure on the SPD with more confidence, even in opposition.

After performing well in Schleswig-Holstein, the Greens will also be expecting another success. This should increase the confidence of the party in Berlin and strengthen their position in the coalition.

But the FDP – the smallest traffic light partner in the federal alliance – must expect to lose some government responsibility in NRW after losses in Schleswig-Holstein.

And there could be a lot more at stake for the right-wing populist Alternative for Germany party (AfD): they failed to get the 5 percent electoral threshold needed for representation in state parliament in Schleswig-Holstein and if they don’t get it in NRW either, this is likely to fuel unrest and in-fighting at the federal level, too. Polls, however, put them at a comfortable 8 percent.

Further declines are expected for the Left with election polls making it look unlikely they will make it into the state parliament, after narrowly missing out five years ago.

What do the polls predict?
According to a pre-election poll carried out by broadcaster ARD, the CDU stood at 30 percent with the SPD just behind at 28 percent. The Greens were lagging behind at 16 percent and the FDP at 8 percent.

Based on that poll, it’s not enough for the status quo – black and yellow or CDU and FDP – to continue. A coalition between CDU and SPD (red) would technically be possible, but is incredibly unlikely and it’s just enough for a black-green alliance but not quite enough for a red-green one.

The top candidates from the CDU, SPD, Greens and FDP are keeping all coalition options open and ruling out nothing except for cooperation with AfD.

If we go by the polls, it’s possible that neither the CDU or the SPD will win enough votes to become the strongest political force. In that event, the decisions of the parties who would be needed to form a coalition, especially the Greens, would be key.

When do the results come out?
Polling stations are open until 6pm. The counting of the votes starts as soon as they close and exit polls are published at this point, too. The first projection based on interim results is expected around 6.30pm with projections becoming more precise over the course of the evening as more votes are counted.

If you want to see it all play out, you’re probably going to have to wait until at least the early hours of the morning. At the last election five years ago, the final preliminary outcome was announced around 4am the next day. The definitive final result is not published until it has been verified – this can take several days or weeks.