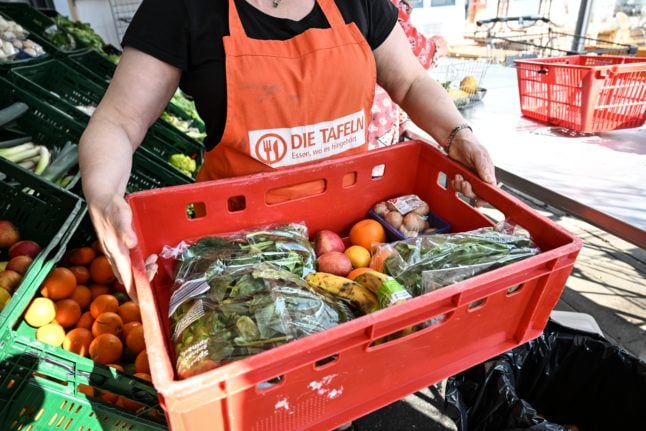 An employee at a food bank, known as the Tafel in Germany, carries a box full of fruit and vegetables. Photo: picture alliance/dpa | Felix Kästle

It’s a well-researched fact that poverty forces people to make poor financial choices. Those who have ready money are able to buy consumables in bulk, cutting costs per unit, and purchase durables of higher quality, which last longer and so give better value over their service life.  Everyone’s heard of the example of footwear: wealthy individuals can afford expensive shoes; those on a tight budget have to buy cheaper ones which wear out faster. The result is that, over their lifetime, they end up spending a higher percentage of their income on shoes than those with better financial resources.

There is also plenty of research showing that many households on the breadline are aware of false economies – disparagingly referred to as a Milchmädchenrechnung (“milkmaid maths”) – and so try to save up to make bulk buys and invest in higher-quality goods. The problem is that the small sums of money they are able to put aside have a tendency to suddenly get swallowed up elsewhere: something breaks, gets lost or stolen; an unexpected bill needs to be paid. Generally, it isn’t profligacy which thwarts poorer consumers, but unforeseen circumstances.

Long-term unemployed have little to live on

Despite the extensive body of research already available on this, for the last two decades, Germany has been conducting a large-scale field study into the effects of poverty. Yes, it’s been almost exactly 20 years since the Hartz Commission first published its recommendations for the sweeping reforms to Germany’s welfare state enacted in 2005. Since then, the long-term unemployed have been kept on a regime so measly that, five years later, a ruling from our highest court declared it partially unconstitutional. 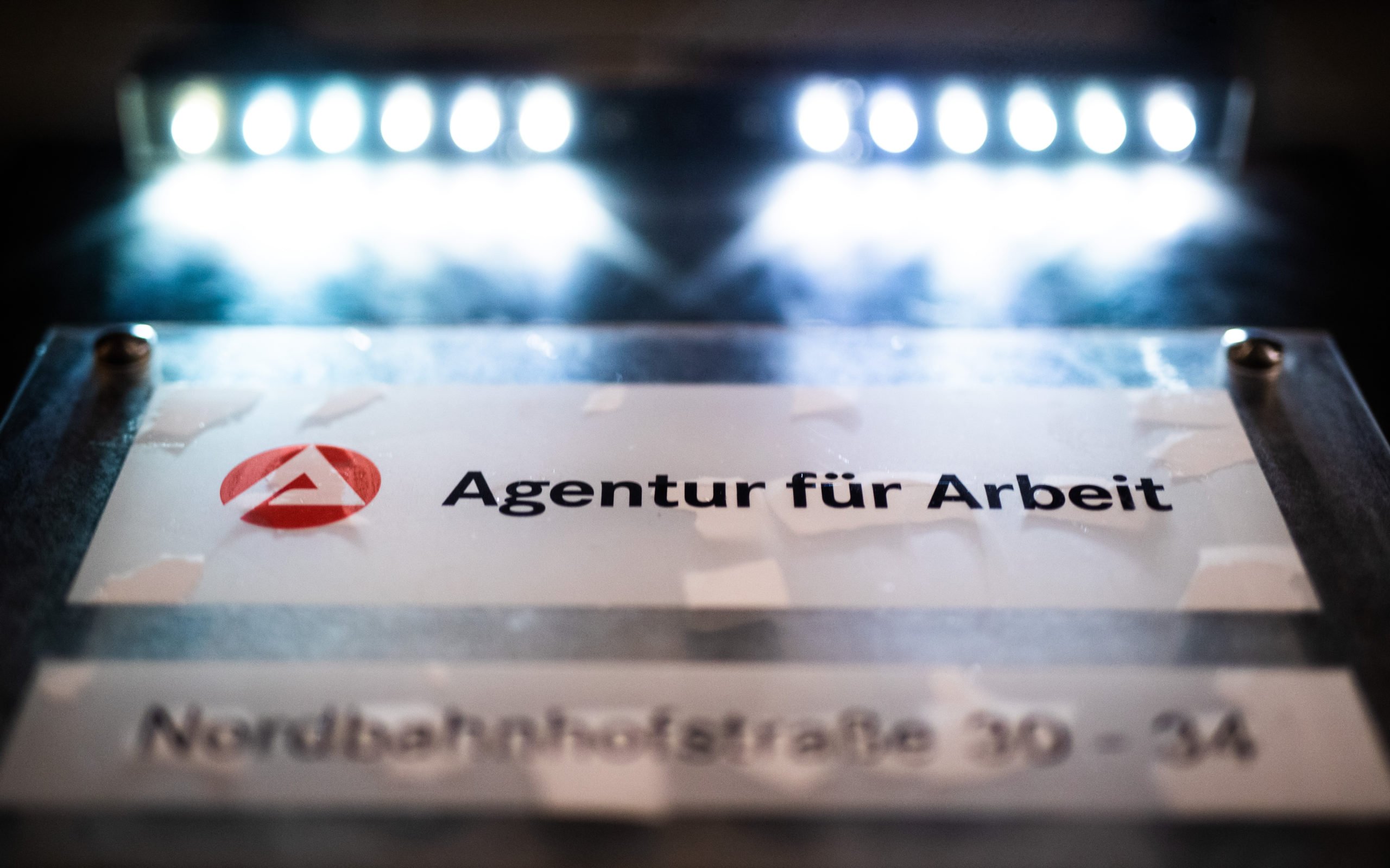 A sign at the entrance of the Agentur für Arbeit or Job Centre in Stuttgart. Photo: picture alliance/dpa | Christoph Schmidt

For many of us immigrants to Germany, this fact is surprising, shocking even. The country’s reputation abroad is that of a wealthy, comfortable society with high taxation and high social spending – a sort of Scandinavia-light, if you will. What is more, most of us have come to Germany to work: our skills are in demand and few of us remain jobless for more than a few months, during which unemployment benefits are indeed generous.

It’s once they run out that things get tight: if you’ve had the misfortune of being out of work for more than a couple of years, you end up on “Hartz IV”, as basic income support is known, and have €449 a month to live off of. The state pays your health insurance contributions and gives you housing benefit (but only up to a certain threshold), and also covers your heating and water bills. It doesn’t, however, pay for electricity, and even a cursory glance at the way the monthly total is calculated reveals that, no, you won’t have enough left over to buy good shoes: for 2022, the commission which sets the benefit has earmarked €37.26 monthly for clothing; another €38.07 is budgeted for electricity, and €40.47 for transport. (Incidentally, “hostelry services” – i.e. the pub – is pegged at €11.73; life-long learning comes in at €1.62.)

Even in happier times, these sums never left much room for manoeuvre and, as these monthly budgets are only re-assessed every few years, they don’t take account of sudden price rises. As such, in January, Hartz IV went up by €3, or 0.67 percent, from €446 to €449, at a time when inflation was already running at over five percent. That, of course, was still before the invasion of the Ukraine and China’s crazy lockdowns. Now that, to put no too finer point on it, the shit has really hit the fan and prices for everything are skyrocketing, this paltry rise looks downright miserly.

Getting a grasp of these figures is an important precondition to understanding why there is a sudden race on in Berlin to introduce all manner of special pay-outs, discounts, hardship clauses etc. In early February, the gas price spike led to a one-off energy relief subsidy for low-income households and the abolition of renewable energy levies on electricity; after that, there were Finance Minister Christian Lindner’s plans to slash the cost of fuel, then the €9 season tickets, then this, then that…

Yet what might, at first glance, look like a proportionate, perhaps even generous response to a cost-of-living crisis needs to be put in the context of two decades in which a not insubstantial proportion of German society has been kept on a pittance: even before the world went bonkers, many were frequently unable to maintain even a basic standard of living. Besides the poor souls on Hartz IV, there are the elderly ladies living on pensions which amount to even less and the ranks of the working poor, who had to wait until 2015 even for a minimum wage to be introduced – one that is, at €9.50 per hour, one of Europe’s lowest (and is now hurriedly being raised to €10.45). I recently read that, in the last year prior to Corona, 7,986 households in Hamburg had their electricity switched off because they couldn’t afford the bills; even in 2021, during a worldwide pandemic the state government considered so dangerous that it kept everything closed for nearly six months, it allowed 6,821 non-payers to be taken off the juice. 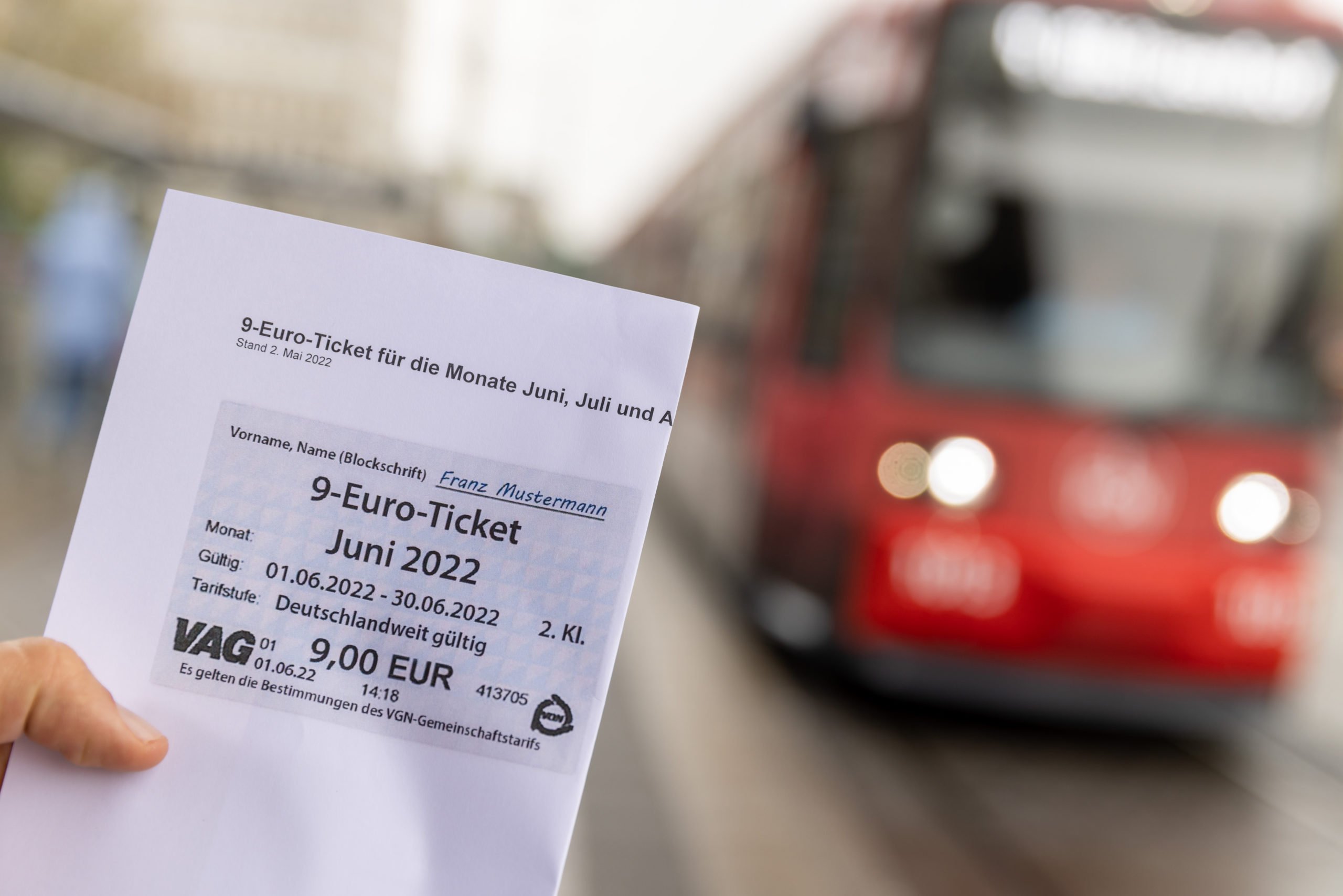 An employee of the VAG (Verkehrs-Aktiengesellschaft Nürnberg) presents a printed draft of the €9 ticket. The ticket is one of the government measures to east the cost of living crisis for people in Germany. Photo: picture alliance/dpa | Daniel Karmann

So those on Hartz IV will no doubt be delighted to learn that they are now due a €100 special one-off hand-out (“Don’t spend it all at once!”) and an extra €20 per month per minor in the household (“Won’t somebody please think of the children?”). They can put that aside to pay what is likely to be a vastly increased electricity bill: unless, of course, their shoes wear out, their fridge breaks down, or they’re unfortunate enough to lock themselves out of their flat (my neighbour did that last weekend and it cost him way north of €100…).

What’s astonishing about all of this is that, since the beginning of the pandemic, the state has been splashing money around to a degree that, until 2020, would have had fiscally-conservative German economists up in arms. Moreover, substantial portions of this most recent splurge are not even targeted: I and millions of others who could easily afford to pay for a full monthly season ticket will now be benefitting from a hefty state subsidy every time we get on the bus. The bewildering array of measures announced since January will add several percentage points to our national debt, and yet no-one seems particularly concerned. On the other hand, for two decades now, society’s poorest have been grudgingly allocated meagre sums calculated down to the very last cent – because, apparently, the previous benefits system was costing the country too much.

I think what is actually costing us is poverty. As we enter an age of permanent crisis, it should be a priority to make sure that even society’s most disadvantaged can afford to keep up a basic standard of living every month, rather than having to be continually bailed out whenever a zoonotic pathogen sweeps over us or some crack-pot dictator goes bananas. Our bargain-basement benefits are a false economy, and this sudden shower of one-off hand-outs is a classic Milchmädchenrechnung. Like a good pair of shoes, in the long run, adequate social security would represent better value.

“We take the current threats seriously and are protecting ourselves,” Interior Minister Nancy Faeser told German daily Sueddeutsche Zeitung, amid suggestions the incident was the result of sabotage.

The Nord Stream pipelines, halted since the end of August, were key arteries for the delivery of natural gas directly from Russia to Germany.

The source of the explosions has remained a mystery, however, with both Washington and Moscow denying responsibility.

Germany would “support the joint investigation” of the incident with Denmark and Sweden, Chancellor Olaf Scholz told his counterparts from both countries in a video call Friday.

All indications pointed towards a “deliberate act of sabotage”, according to a readout of Scholz’s calls with the two leaders, as well as the Norwegian Prime Minister Jonas Gahr Store and NATO chief Jens Stoltenberg.

Together with partners in the European Union and NATO, Germany would “strengthen preparedness and protection against sabotage for critical infrastructure”, the readout said.

Norway, which has become Europe’s biggest supplier of natural gas, said earlier Friday it had accepted military contributions from France, Germany and Britain to secure its oil and gas sector. 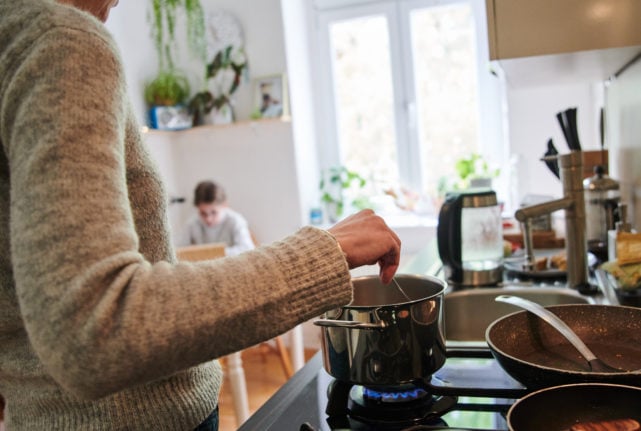