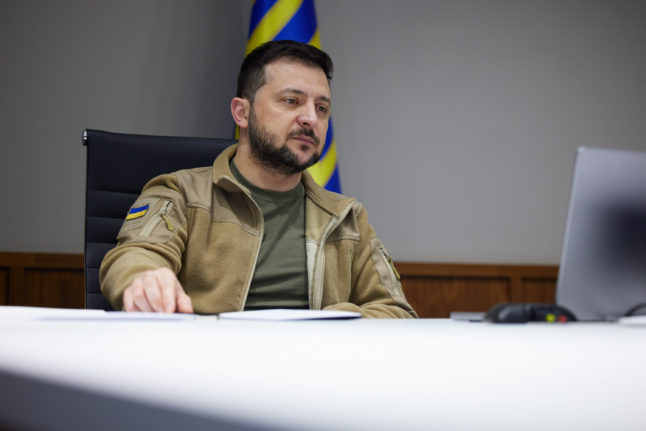 Zelensky made the invitation during a telephone call with Steinmeier on Thursday, a source from the president’s office told AFP, during which “past irritations were cleared up” and Steinmeier expressed his “solidarity, respect and support” for Ukraine.

A diplomatic spat had been rumbling between the two countries since Steinmeier admitted last month  he had offered to visit Ukraine with other EU leaders, but this was “not wanted in Kyiv”.

The German president, also a former foreign minister, has come under heavy criticism since Russia’s invasion of Ukraine in February for his years-long detente policy towards Moscow.

Ukraine’s ambassador to Germany in March boycotted a solidarity concert hosted by Steinmeier, protesting that the soloists featured on the programme were all Russians.

“In the middle of a war against civilians! An affront. Sorry I’m staying away,” Andrij Melnyk wrote on Twitter.

Steinmeier and Scholz are both Social Democrats (SPD), who have over the years pushed for closer ties with Russia — including energy ties that have left Germany heavily dependent on Russian gas.

Steinmeier admitted in April that he had made a “mistake” in pushing for Nord Stream 2, the controversial pipeline built to double Russian gas imports to Germany.

Criticism has also mounted against former chancellor and fellow SPD member Gerhard Schröder, who is a lobbyist for Russian gas and has a close friendship with Russian President Vladimir Putin.

Scholz, meanwhile, has been criticised for his own failure to visit Kyiv, as well as his hesitancy over providing heavy weapons to help Ukraine resist Russia’s invasion.

Even as German opposition leader Friedrich Merz visited Ukraine this week, Scholz said he did not want to visit himself until Kyiv’s differences with his fellow Social Democrat Steinmeier had been ironed out.

However, Germany did say last week it would send anti-aircraft tanks to Ukraine, in a clear switch in Berlin’s cautious policy on military backing for Kyiv.

Scholz also expressed backing for a motion passed by the German parliament calling for the acceleration of the delivery of heavy weapons to Ukraine.

The chancellor has also hit back at criticism of the SPD, accusing his opponents of a “distorted and slanderous depiction” of its Russia policy.

In the telephone call on Thursday, Steinmeier said Germany “stands with united forces in solidarity at Ukraine’s side”, the source from the president’s office said.

Both presidents described the talks as “very important and very good”, the source said.

The announcement came after German Defence Minister Christine Lambrecht visited Ukraine this weekend for the first time since Moscow’s invasion in February.

Germany, Denmark and Norway had agreed to jointly finance the procurement of the Slovakian Zuzana-2 guns at a cost of 92 million euros ($90.2 million), said the defence ministry in Berlin.

They will be produced in Slovakia, with delivery to Ukraine to begin in 2023, it said.

The new pledge still falls short of what Ukraine has been asking for. Kyiv has repeatedly sought Leopard battle tanks from Germany, but Chancellor Olaf Scholz’s government has refused.

Scholz has said he does not want to go it alone on arms supplies and will only take decisions in consultation with his Western allies.

“We will continue to engage in a variety of ways and will again — as we have up until now — work together with partners,” she told the “Bericht aus Berlin” show.

She also insisted that Germany would not become a direct party to the conflict.

“It is very clear — for the German government as well as the whole of NATO: We will not become a party to the war,” Lambrecht said.

Her visit Saturday to the southern port city of Odessa came a day after Russian President Vladimir Putin declared the annexation of four Ukrainian regions.

The annexations were unanimously condemned by Ukraine’s allies, including Germany.

Lambrecht described how air raid sirens went off during her visit.

“We experienced that twice in a few hours, and had to move to a bunker. And for people there, that is reality,” she told the ARD show. “That is everyday life.”