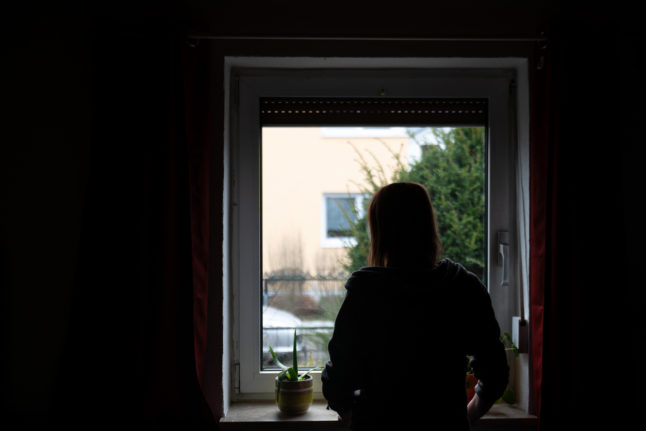 A woman looks out of her window during a period of self-isolation. Photo: picture alliance/dpa | Sebastian Gollnow

The move was announced by the health ministry in Saxony-Anhalt, which currently chairs the Conference of Health Ministers, late on Thursday following a meeting of the federal and state health ministers.

At the start of next week, the Robert Koch Institute (RKI) will revise the duration of self-isolation and quarantine to a minimum of five days, it was announced.

Currently people have to isolate for up to 10 days with a Covid infection and can only end it after a week with a negative test.

The ministers are also mulling over plans to end mandatory quarantine period for contacts of infected people. Instead, quarantine is likely to be “strongly recommended”.

The health ministers say that the relaxation of the rules can be justified by increased immunity in the population and the fact that the Omicron variant of Covid-19 generally causes milder courses of the disease.

“It’s gratifying that all states have agreed on a uniform procedure based on the scientific expertise of the RKI,” Saxony-Anhalt’s health minister Petra Grimm-Benne (SPD) said at the press conference.

However, federal and state ministers may be set to clash over whether people should continue to take a test in order to be released from self-isolation.

“Personally, I believe that at the end of five days – which is a very short time – at least self-testing should be urgently recommended,” federal Health Minister Karl Lauterbach (SPD) said in an interview with ARD on Friday. “Because we know that many are still positive after the fifth day, and they would then still infect others.”

It comes after several states already started the process of shortening the isolation period in the past few weeks.

So far, all of them have chosen to ditch the “test-to-release” scheme and rely on symptoms instead.

Ahead of the meeting, Bavaria, Saxony and Thuringia cut the duration of quarantine to five days for people who are symptom-free for at least 48 hours beforehand.

Baden-Württemberg and Rhineland-Palatinate said they intended to follow suit. The other states will change their regulations after the meeting on Thursday.

Currently, isolation and quarantine generally lasts 10 days but can be ended prematurely with a negative test after seven days at the earliest.

Recently vaccinated and recovered people and those who’ve had a booster jab aren’t required to quarantine after having contact with an infected person, but everyone else must isolate themselves for at least a week.

At the start of April, Lauterbach announced plans to end mandatory self-isolation and then swiftly backtracked on the idea, saying it had been a “clear mistake”.

Some states, including Bavaria, are still calling for compulsory isolation to end as part of a phased plan for loosening Covid restrictions.