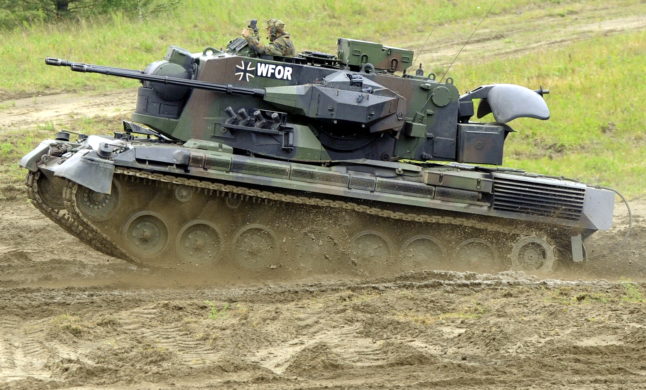 The government has agreed to sign off the delivery of used Gepard anti-aircraft tanks, Lambrecht told an international meeting of defence ministers at the US Ramstein airbase, according to a draft of her speech seen by AFP.

Forty countries are holding emergency talks at the airbase in southwestern Germany on bolstering the defence capabilities of Ukraine.

The meeting, held on the invitation of the United States, is “focused on doing things to generate additional capability and capacity for the Ukrainian forces”, according to Defense Secretary Lloyd Austin.

France is delivering Caesar cannons with a range of 40 kilometres (25 miles) and Britain has provided Starstreak anti-air missiles and tanks.

German Chancellor Olaf Scholz has come under fire for refusing to directly send heavy weapons to Ukraine, despite announcing a “turning point” in German defence policy in response to the war.

Critics have accused Scholz of weak leadership and say his Social Democrats (SPD) are too reluctant to break from their historic policy of detente towards Moscow.

Scholz has even faced criticism from within his own coalition government, a partnership between the SPD, the Greens and the liberal FDP.

The chancellor has justified his cautious approach by saying he wishes to avoid a direct confrontation between NATO and Russia, a nuclear power.

But according to a draft document seen by AFP on Tuesday, the three coalition parties now plan to present a joint proposal in parliament calling for the delivery of heavy weapons to Ukraine.

The document calls on the government to “continue and, where possible, accelerate the delivery of necessary equipment to Ukraine, including extending the delivery to heavy weapons and complex systems”.

It also suggests that Ukrainian soldiers should be trained in Germany and other NATO countries to operate the weapons.