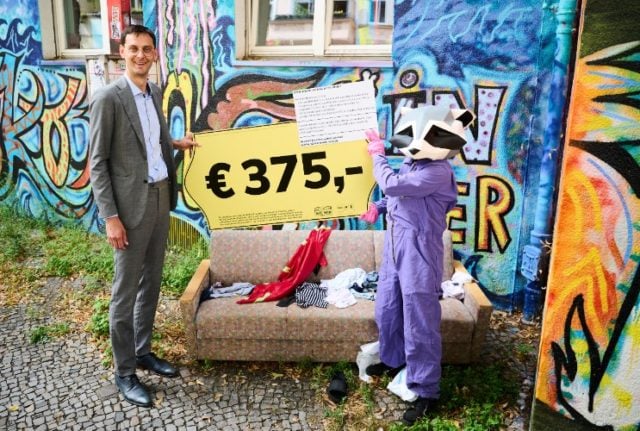 An initiative to raise awareness about the costs of removing bulk garbage in Berlin. Photo: dpa | Annette Riedl

These boxes are particularly common in the spring time when Germans do a spring clean and sort out all their unwanted items.

It is increasingly common for Germans to put their unwanted possessions on the street rather than throw them away. In a country that is conscious about sustainability, many people want to give their old clothes and books the chance of a new life with someone who will appreciate them.

It is not uncommon to even see sofas or larger household items blocking up the pavement.

But, if you want to dispose of old items in this way, you should be aware of a few rules.

It is not actually legal to dispose of large household items by simply dumping them in front of your house door. German authorities say that anything that obstructs pedestrian’s ability to walk down the street, is a breach of the law and those caught disposing of such items could face a fine of several thousand euros.

But just putting a small box of smaller household items onto the street isn’t necessarily an offence, and most authorities turn a blind eye to such behaviour.

An official from the Stuttgart city authority recently told the Stuttgarter Zeitung that putting a small box on the street is tolerated.

“The city tolerates small boxes of items being put on the pavement as long as it doesn’t block the pedestrian’s movement,” the spokesperson said.

But you should still come back to check two or three days later. If some of the items have not been taken then it is your duty to dispose of them in another way.

According to Focus magazine, one should be careful about whether the items could end up smelling.

“Most courts distinguish between reasonable and unreasonable odours. What is permitted is therefore decided on a case-by-case basis,” the magazine states.

The safest way to get rid of old items while giving other people a chance to browse through them, is to put them inside the boundaries of your own property and clearly label that you are giving them away.

READ MORE: 15 timely phrases that prove Germans are all about punctuality