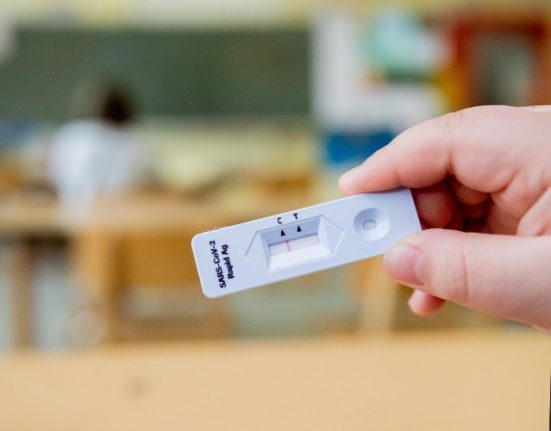 A pupil holds his negative test during a trial run with Corona rapid tests at the elementary school in Köllnische Heide in Berlin-Neukölln. Photo: Christoph Soeder/dpa

A DPA survey published on Sunday has revealed that the testing obligation has already been abolished or will end on Monday 25th April in six states, and it will expire by the end of the month in a further six of the 16 federal states.

Thuringia will keep testing school children until May 6th, while Berlin plans to keep testing “until further notice.” No decisions have yet been made in Hamburg and Saarland on how to handle testing as of May.

Education unions and the German Teachers’ Association have criticised the end of mandatory testing. Heinz-Peter Meidinger of the Teachers’ Association told DPA that, “we are confronted with the justified concern of families who have high-risk individuals and sick children in their own households.”

He added that the removal of all health protections would also come at the expense of graduating students who feared missing exams or having to take exams at a later date because of an infection.

According to Meidinger, many high school graduates are currently staying at home as a precaution and skipping classes “because health protection at schools has now been reduced to zero in many cases.”

The deputy chairman of the trade union for education and science (GEW), Andreas Keller, called it “negligent” to end testing so soon after mask wearing was abandoned.

“This is the last effective preventative measure that contributes to protecting the health of employees, students and their parents. The pandemic is not over,” Keller said. “Ending all protective measures is playing with fire that could fall on schools’ feet with the next wave.”

The chairman of the Association for Education and Training (VBE), Udo Beckmann, said that those who want to enable continuous school operation when the incidence of infection is still high, must carefully consider whether now is the right time to dispense with preventative measure tests and masks altogether.

At the beginning of the month, the mask requirement had been abolished at most schools, in line with the requirements of the Infection Protection Act.

While mandatory testing at schools is still legally possible throughout Germany, most of the federal states have dispensed with them. Instead, voluntary and occasion-related tests will be offered in the future, such as in the event of symptoms or if a class trip is imminent.