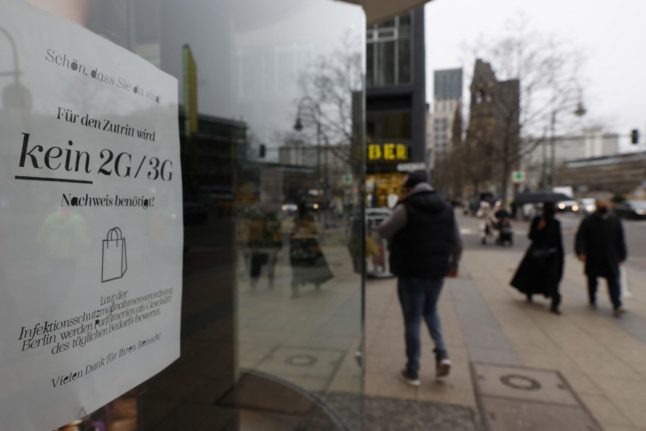 A sign on a shop window (L) informs visitors that the 2G/3G access rules are no longer needed as Covid-19 measures are relaxed in Berlin. (Photo by MICHELE TANTUSSI / AFP)

Despite protests from several federal states, the legal basis for the two-week extension of Covid restrictions expired overnight and, with it, measures like the ‘G’ Covid entry pass system to get into public places like restaurants have also come to an end across most of Germany.

Germany’s coalition government pushed through the new legal framework that brought about the extensive end of Covid-19 measures with the justification that the health system was not overloaded at a national level and that stricter rules could be issued regionally, if necessary.

So, as of Sunday, April 3rd, 2G and 3G access rules no longer apply in most German states. That means people no longer have to show proof of vaccination, recovery or a negative test to visit most public places.

With restrictions mostly over, it’s no longer compulsory to wear masks in shops, museums, restaurants or schools across most of Germany – unless the company, shop or facility requires them, which it is allowed to do irrespective of national or state rules.

Berlin was ahead of the game and already ditched most Covid rules on Friday, April 1st.

This means that in most states there are now only a few settings where you need to wear a mask, such as areas where there are vulnerable people like hospitals and nursing homes, as well as on long-distance public transport.

However, restrictions are still in force in some states.

Two states – Hamburg and Mecklenburg-Western Pomerania – have declared themselves ‘hotspots’, which means they can keep existing Covid-19 restrictions, such as the mask mandate and 2G/3G requirements for access to public places.

The differences were already apparent on Sunday. For example, if you wanted to go shopping in Hamburg, you needed an FFP2 mask. But just over the city limits in Schleswig-Holstein or Lower Saxony, you could go into shops without one.

The ‘hotspot’ regulation is part of the new Covid Infection Protection Law; if state parliaments believe there is a critical situation – whether that’s in a city district, a state or the entire country – and vote it in, then tougher Covid measures, such as the mask mandate, ‘G’ access requirements, or social distancing, can remain or be reintroduced.

This is what Hamburg and Mecklenburg-Western Pomerania have done. Other states, including Bavaria and Baden-Württemberg, have so far said they do not see a legal basis for introducing the rule.

However, the criteria for what constitutes a hotspot is not exactly crystal clear, which has made several of the states unhappy.

The Covid Infection Protection Law says hotspots are areas where “there is a concrete risk of a dynamically spreading infection situation” in a “specifically named regional authority” but does not set a threshold for this.

The general prerequisite, however, is either that a dangerous virus variant is circulating, or particularly high case numbers are putting hospitals at risk of becoming overwhelmed.

Health Minister Karl Lauterbach recently named specific criteria to measures the latter: if hospitals could no longer provide emergency care – because of too many Covid patients or staff shortages, if they had to cancel scheduled procedures or transfer patients to other hospitals – as well as if specifications on a minimum presence of nursing staff could not be met.

However, the hotspot measures don’t last indefinitely: unless parliament extends them, they expire automatically three months after introduction.

The hotspot rule of the new law is valid until September 23rd, but a follow-up law could be implemented in autumn if, for example, there is another surge in cases that puts hospital capacity at risk.

Although the number of new infections has been falling across Germany for a few days, they’re still high.

Hamburg and Mecklenburg-Western Pomerania may be the only designated hotspots at this time, but the only federal state with a seven-day incidence of fewer than 1,000 Covid infections per 100,000 people is Berlin at 872.4.