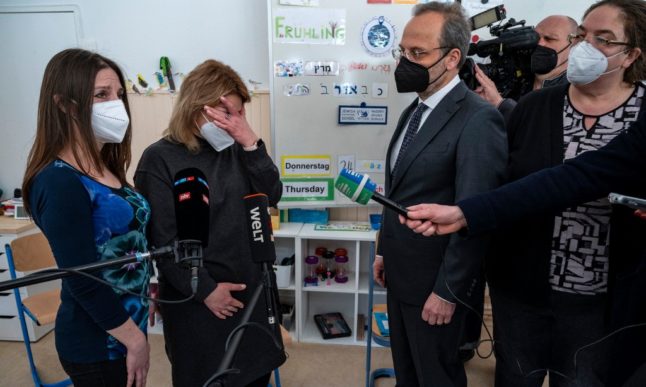 Staff and pupils at the school, run by a “progressive traditional” Jewish movement known as Masorti, warmly greeted the children who fled their homes in Kyiv, Odessa and Kharkiv following the Russian invasion.

Seventy-seven years after the end of the Nazi regime, Germany has become a place of refuge for thousands of Ukrainian Jews.

In Berlin, they have been received by a sizeable community of Russian-speaking Jews who have moved to the capital since the collapse of the Soviet Union.

“It’s remarkable that Jews come to Germany given the terrible crimes committed by Germans in Ukraine during the Second World War,” Felix Klein, the government’s anti-Semitism commissioner, says on a visit to the school.

READ ALSO: ‘It feels like a dream’: The Ukrainian refugees arriving in Berlin from war zone

Some 3,000 Ukrainian Jews — out of a total of 283,000 refugees from the war-torn country — have already arrived in Germany, according to figures provided by Klein.

That Ukrainian Jews would look to the country for protection “does not go without saying”, the president of the Central Council of Jews in Germany, Josef Schuster says. “But Germany has taken on its historic obligations.”

Since the Russian invasion began in late February, Germans have come out in their droves to show solidarity, offering places to stay, warm meals and clothes to Ukrainians who have left everything behind.

The Jewish community in Germany is “particularly well prepared” to greet them, says rabbi Gesa Ederberg at the school where around 60 children between the ages of six and 12 are taught in both German and Hebrew. 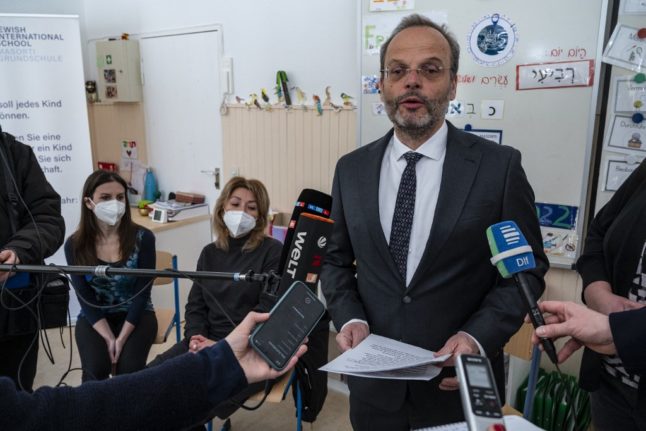 “Forty percent of our members have Ukrainian roots,” she says, while “80 percent speak Russian.”

In the last 30 years, Germany has become a destination for Jews emigrating from the former Soviet Union to whom it has given residence and work permits.

The country’s Jewish population, almost extinguished during the Shoah, is now Europe’s third-largest behind France and Britain.

A new member of the “welcome class”, Sonia, 11, with a blonde fringe and socks pulled up to her knees, says she has found in Berlin a Jewish community “much bigger than in Odessa”.

For Ilona, joining back up with the Masorti community, which she was a part of in Kyiv, has been like finding a family.

“We have a roof over our heads and have been able to bring our children to safety,” says the mother of two girls, aged 13 and five.

“We were on a train to Chernivtsi (in the southwest of Ukraine) when the war broke out,” Ilona says with tears in her eyes. “We stayed there a week,” she says, before being evacuated by bus.

Despite the anxiety that grips her when she thinks of her husband, who stayed behind to fight for Ukraine, or her sister and niece stuck in Kyiv, Ilona says she is “extremely grateful” to Germany.

The strong links between Jews in Ukraine and Germany have helped to evacuate 120 children from Odessa, most of them orphans, and moved many to open their doors to refugees.

Berliner Till Rohmann has made the spare rooms in his house available to host two families from Odessa and Kharkiv.

“We are doing what we can to make them feel at home,” says Rohmann, a musician who has previously welcomed refugees from Syria into his home.

“Compared with 2015, we have some cultural similarities with the Ukrainian Jews,” says Rohmann, himself Jewish.

“We can communicate in Hebrew and can say the Shabbat prayers together.”