The cost of buying a home has jumped significantly in the past year in Germany, with major cities and rural areas seeing the biggest rise in prices.

This is the biggest price increase in residential property prices in more than two decades.

It followed two previous quarters of strong growth, with prices springing up by 12 percent in Q3 and by 10.8 percent in Q2 compared to the previous year's figures. From Q3 to Q4, property prices went up by just over three percent on average in Germany.

In the annual average for 2021, prices for residential property in Germany rose by 11 percent overall compared to 2020 - almost double the average growth of 7.8 percent in 2020.

The latest statistics suggest that Germany is seeing a renewed boom in its housing market after the pandemic, which could reflect the low interest rates on mortgages and the impetus to invest savings in property to prevent them being eroded by inflation.

With a culture of remote working taking hold in Germany since the pandemic struck in 2020, prices in rural areas showed the strongest growth of all last year.

According to Destatis, the cost of buying a detached or semi-detached house in less populated rural regions rose by 15.9 percent against the previous year, while flat prices went up 13.2 percent. In more densely populated rural districts, prices for detached and semi-detached houses rose by 14.5 percent and prices for condominiums went up by 11.2 percent.

This trend could continue as more and more people consider swapping their urban lifestyle for a gentler pace of life in the countryside. 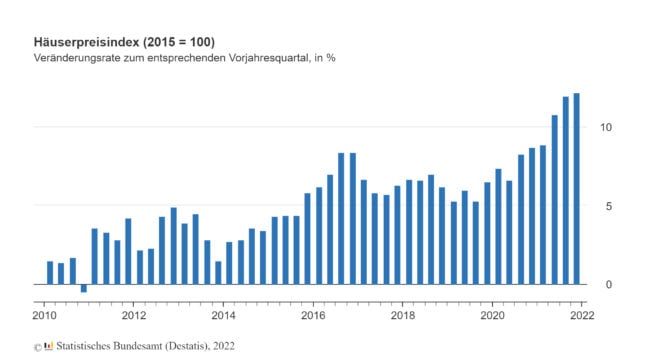 A recent survey by property search portal ImmoScout24 revealed that two-thirds of Germans had thought about moving to the country in the past few years, with most attracted by the idea of being close to nature and being able to have their own garden.

Since the start of the pandemic, demand for family homes out in nature has gone up by 30 percent, ImmoScout24 revealed. The demand was particularly strong in the green belt areas around Berlin and Hamburg.

In a reflection of the fiercely competitive rental market, property prices in Germany's seven major metropoles also rose steeply in 2021.

Berlin, Hamburg, Munich, Cologne, Frankfurt, Stuttgart and Düsseldorf all saw above-average price increases in Q4, with prices for detached and semi-detached houses rising by 12.8 percent and prices for flats by 12.7 percent year-on-year.

A small consolation for potential big-city buyers: the price hikes in the metropoles appear to be tapering off a bit.

Between the third and fourth quarter, prices for detached and semi-detached houses in metropolitan areas rose by 1.4 percent, while flat prices rose by just 0.7 percent. This is a marked change to the rate of growth just a quarter earlier, when prices for houses jumped by 3.5 percent and prices for flats had jumped by 3.8 percent compared to Q2.

Saxony, for example, remains a highly affordable place to buy a starter home, while in Bavaria and its capital, Munich, buyers can expect some of the highest property prices in the country.