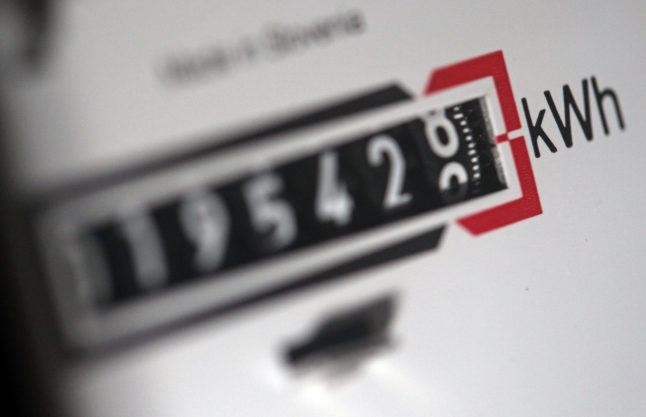 With energy prices continuing to soar, yet another package of relief measures is in the pipelines. But each of the parties that make up the traffic-light coalition – the SPD, Greens and FDP – has their own distinct vision on how best to support businesses and consumers.

A set of draft proposals obtained by ARD-Hauptstadtstudio lays out a number of potential measures that could be used to offer relief on fuel, heating and electricity costs.

According to ARD, there are still a number of disagreements around the plans, but the government hopes to produce a finalised package of measures on Wednesday evening.

Here are the key points in the draft proposals to be discussed.

Above all, the pro-business FDP is pushing for relief for car owners.

Following two consecutive increases to the commuter allowance – which allows employees to write-off some of the costs of travelling to work – there could be further financial support on the horizon.

The key measure put forward by Finance Minister Christian Lindner (FDP) is a fuel rebate for car drivers. This plan would see drivers treated to an instant discount at the pump, which petrol station operators would then have to claim back from the tax office.

Also included in the measures is a “one-off rebate” in car tax. Presumably this would be claimed by drivers in their 2022 tax return, meaning more in their pockets in the coming year.

The FDP are likely to face pushback on these ideas from the Greens and from Economics Minister Robert Habeck in particular, who has previously spoken out against a potential fuel rebate.

The FDP are also said to be in favour of expanding Germany’s domestic natural gas production. The question of how to secure natural gas is a particularly urgent one in light of the ongoing Ukraine war and Germany’s attempts to ween itself off Russian gas.

This question would have to carefully thrashed out with the Greens, however, particularly when it comes to investing funds that could be used for renewables instead.

Ban on gas heating for new-builds

With the double-pronged goal of being climate-friendly and socially minded, the Greens are allegedly asking for a ban on gas heating systems from 2023.

Though existing buildings with gas heating wouldn’t be affected, the ban would affect any new housing developed after next year by banning the installation of this type of heater.

Another classic policy from the Greens contained in the paper in the disbursement of so-called ‘energy money’ or an ‘energy fund’. This proposal was contained in the Greens’ pre-election manifesto but so far hasn’t been implemented due to questions about how to distribute it.

Essentially, the energy money is a redistribution of the CO2 tax back to consumers – with lower-income households and those who use less energy benefitting the most.

According to ARD, the Greens now propose that the Finance Ministry develop a way of doling out the money to German taxpayers using their tax ID. The deadline for this would be October. 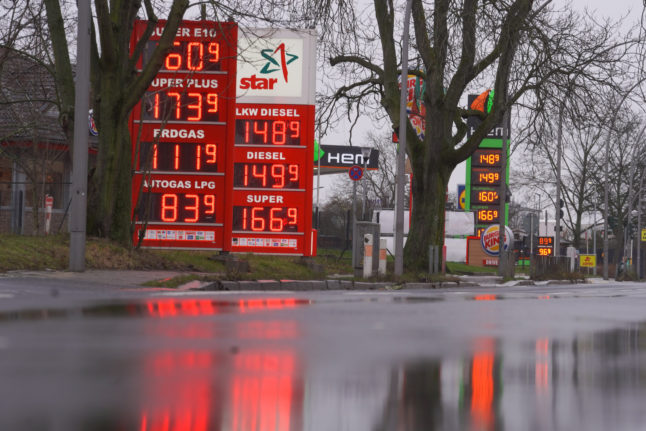 The centre-left SPD, who are also the largest party in the coalition, have set their sights on measures for lower-income and vulnerable groups.

The first of these would be a one-time subsidy for workers in Germany, which would be tapered by income and according to the number of children in any given family. One key issue with this is that the relief would be applied to the 2023 tax return, which means it would be another two years before consumers experience any benefits.

Apparently, the FDP are firmly against this idea and early signs are that it could be replaced with a so-called mobility allowance for people on small and medium incomes.

The exact amounts of either type of relief are currently unclear and would presumably have to be thrashed out in the cabinet.

Another SPD proposal is that a child bonus (Kinderbonus) – similar to the one introduced during the initial waves of the Covid pandemic – should be brought in again “as soon as possible”.

The SPD also wants to ensure that the flat-rate heating allowance for housing benefit recipients, which was agreed in the last package of measures, is paid on a long-term basis.

They also suggest increasing the current supplement by a further €100 as a one-off bonus this year. 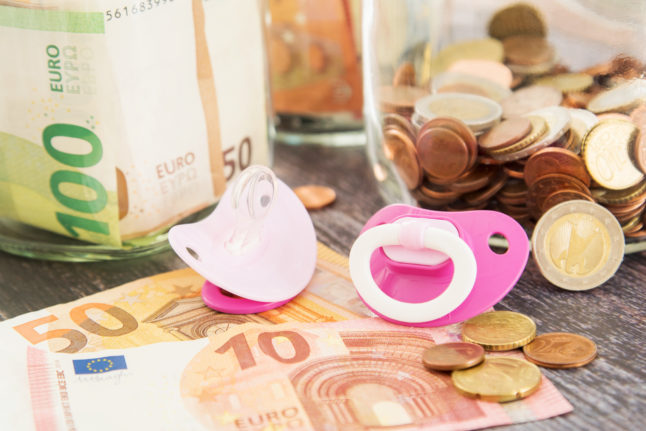 Money and dummies lie together on a table. The SPD is believed to be pushing for a new ‘child bonus’ for families. Photo: picture alliance/dpa/dpa-tmn | Christin Klose

Pensioners should also benefit from a one-time energy payout, according to the proposals.

The draft outlines the importance of elderly people remaining mobile in the community, even if they aren’t travelling to work each day.

The SPD is apparently also concerned about public transport fares and wants the coalition to ensure that bus and train fares do not rise or that services aren’t cut as a result of rising fuel prices.

What about a cap on energy prices?

This is a measure that the EU Commission is said to be considering at present, alongside other measures such as joint gas purchases throughout the bloc. The EU package of measures will also be discussed on Wednesday.

But Germany is believed to be one of the primary voices against such a measure, with the FDP in particular speaking out against any state intervention in the natural gas or mineral oil markets.

A more liberal-friendly policy would be to cut taxes on things like electricity and gas in order to provide relief for both businesses and consumers. However, the issue with this is that businesses could use the tax cuts as a means of accruing more profit and continue to raise their prices regardless. 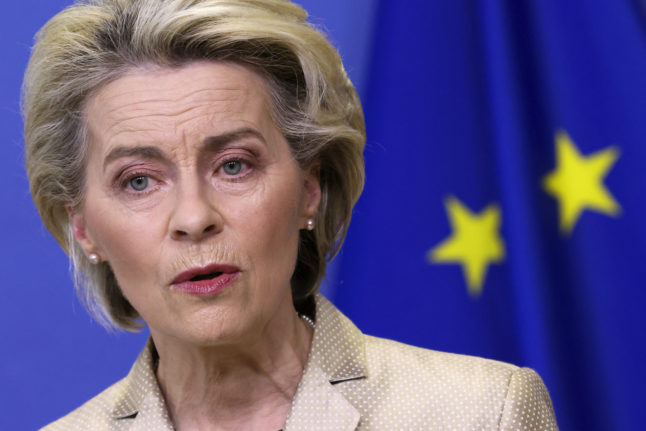 When will these measures come in?

As we mentioned, it’s still very early days yet – and many of the policies outlined above the subject of fierce debate within the cabinet.

What we’re likely to see later on Wednesday is some kind of Frankenstein’s Monster, with different measures cobbled together from each party.

Some of these may offer more immediate support – like the child bonus or the energy supplement – while other types of support could be doled out through tax rebates and may therefore take several months or years to come into force, which won’t be much comfort to people struggling at the moment.

Others, like the Greens’ proposals to ban gas heating, would be structural measures dedicated to the transition away from volatile and climate-damaging fossil fuels. The benefits of these presumably wouldn’t be felt for several years.

The lights on the tree will only shine for four hours each evening from four o’clock to eight, instead of burning constantly as they did last year, the spokesman told AFP.

The fir, plucked from the forests of nearby Brandenburg, is decorated with 4,920 low-energy LED lights, which will consume 287 watt-hours.

A children’s choir on Thursday sang the classic carol “O Tannenbaum” (O Christmas Tree) at the foot of the tree in Scholz’s presence.

Last year, the tree was put up while conservative Chancellor Angela Merkel was still in office.

The erstwhile German leader stepped down on December 8th to make way for Social Democrat Scholz, and his coalition partners, the Greens and the liberal FDP.

A few hundred metres from the chancellery, the Christmas tree in front of the Brandenburg Gate will also only be lit for six hours a day instead, as opposed to 24.

The Russian invasion of Ukraine on February 24 upturned global energy markets, sending prices soaring and confronting Europe with the possibility of shortages over the winter.

To avoid acute problems around the turn of the year Germany has set about tapping new sources of natural gas and encouraging energy saving measures.

Floodlights that illuminate some 200 public monuments and buildings in Berlin — including its red-brick city hall, State Opera House and Charlottenburg Palace — have also been turned off overnight since July. 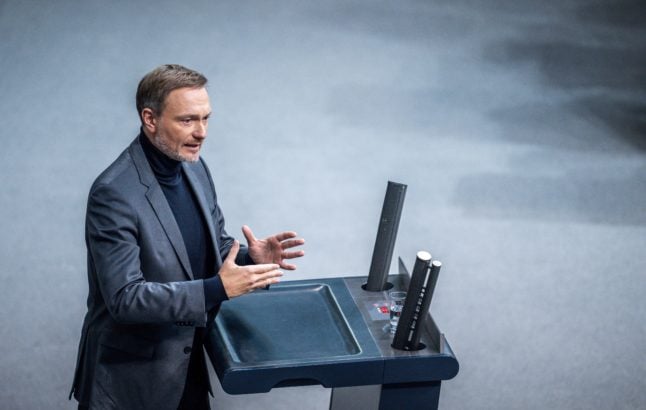