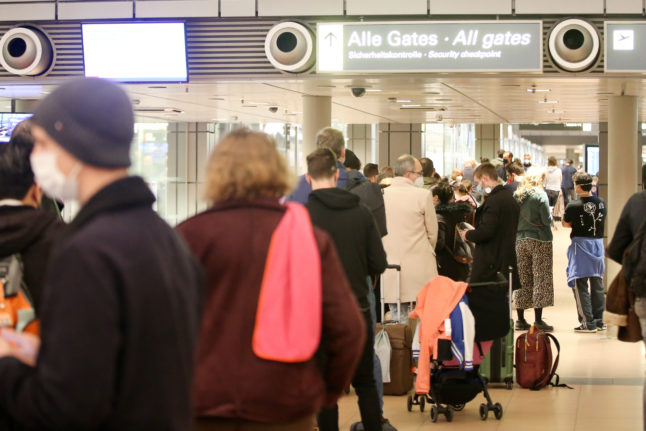 Trade union Verdi announced on Monday that it was calling another all-day strike and urged its members to walk out on Tuesday.

Security staff at Frankfurt, Berlin, Bremen, Hamburg, Hanover, Stuttgart, Dusseldorf and Cologne-Bonn airports will be taking part in the industrial action, which is being held in a collective bargaining dispute about pay and conditions.

Tens of thousands of air passengers were affected on both days – facing cancellations or severe delays. Two thirds of all departures were cancelled last Monday at Berlin airport.

Strikes at some airports were also held at the end of February.

Airports are expecting more chaos for travellers on Tuesday. Passengers have been urged to check in advance with their airline to see if their flight is cancelled. If it is going ahead they should allow extra time at the airport, bosses have urged.

“We expect considerable restrictions in air traffic,” a spokesman for the operating company at Berlin’s BER airport said on Monday.

“The strike activities are expected to cause major disruptions and flight cancellations throughout the day,” a statement from Frankfurt airport operator Fraport said.

The airport said passengers flying from Frankfurt “will not be able to pass through the legally required security checks and get to their flights” and strongly advised those affected to avoid coming to the airport.

“We expect that transfer processes for connecting passengers in the transit area will still largely be possible,” Frankfurt airport added. “Nevertheless, also transfer passengers should expect disruptions and delays due to the strike.”

A spokeswoman from Stuttgart airport said: “We strongly advise travellers to check the flight status with the airline before going to the airport.”

The ‘warning strikes’ are part of a collective bargaining dispute between Verdi and the Federal Association of Aviation Security Companies (BDLS). The union is negotiating with the employers’ association on wage increases for 25,000 security staff nationwide, among other issues.

But so far, four rounds of negotiations have failed. Both sides plan to meet again for talks this Thursday.

The agreement “includes a comprehensive peace obligation until 30th June 2023”, with strikes “excluded during this period”, Lufthansa said in a statement.

The airline and the pilots’ union Cockpit signed an accord in early September to avoid planned industrial action.

The deal sees basic pay for pilots at Lufthansa and its cargo subsidiary climb by 980 euros ($993) in two equal steps, once retroactively for August 2022 and again in April 2023.

A rookie copilot will see wages increase by 20 percent under the agreed plan, while the raise for a seasoned pilot will be equivalent to 5.5 percent, according to Lufthansa.

The two sides “will continue their constructive exchange on various topics” while the deal is in place, Lufthansa said.

Beyond the pay agreement, the union was happy to “take a step towards a durable partnership” with the accord, Cockpit boss Marcel Groels said.

During the dispute, pilots walked out for 24 hours at the beginning of September, leading Lufthansa to cancel almost all its flights out of Frankfurt and Munich, its two German hubs.

Lufthansa reached a pay deal with ground staff in early August, after the dispute led to strike action in the peak European holiday season.