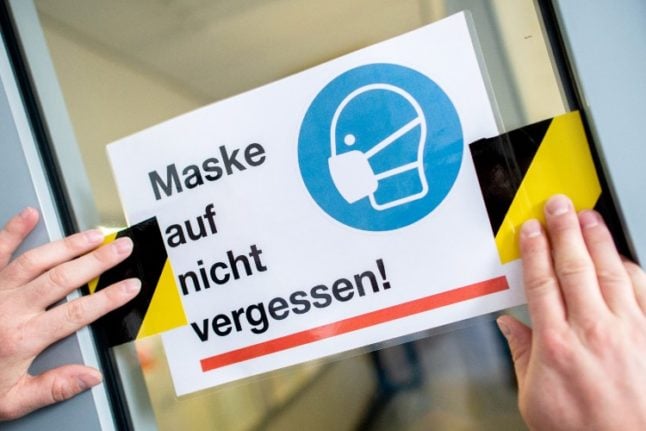 A sign reminding people to wear masks at a shop in Oldenburg. Photo: Hauke-Christian Dittrich/dpa

As of Sunday, passengers on Deutsche Bahn trains will no longer need to show proof of vaccination, recovery or a negative test result, with the state rail company immediately enacting the new law.

Passengers will still need to wear masks while travelling though.

People going to work will also no longer need to obey the so-called 3G rules.

The changes come due to the fact that the old disease protection law ended at midnight on Sunday and was replaced by a law which stipulates more relaxed rules.

Federal Justice Minister Marco Buschmann said that “as of now, we are moving people’s personal responsibility to the forefront. We are taking another big step towards normality.”

Most states have made use a transition period though and will only remove rules such as indoor mask wearing at the beginning of April.

The opposition CDU/CSU parties have criticised the government for bringing in the law at a time when daily cases are still high.

Bavaria’s Health Minister Klaus Holetschek (CSU) told Bild am Sonntag that “instead of a day of freedom, we are threatened with a day of unreason.”

On Sunday a further 131,792 new cases were recorded by the Robert Koch Institute.

At the same time, the number of people in intensive care has remained stable since the end of January and is far below a peak of over 4,000 patients reached on December 13th.

Criticism of the relaxed measures also came for the chairman of the German Federation of Trade Unions (DGB), Reiner Hoffmann, who called on the government to reverse its decision.

“We are seeing record infections and the situation may worsen again in the autumn,” Hoffmann told the Funke Mediengruppe newspapers.

“I plead for the disease control law to be quickly tightened up. We must not risk the workplace becoming a hotbed of infection again,” he said.

Under the law passed by the Bundestag on Friday testing and vaccine entry requirements will be restricted to facilities for vulnerable groups such as nursing homes and hospitals.

The law does however foresee stricter rules for regional “hotspots” as and when outbreaks occur.

All 16 federal states now want to use a transition period of two weeks provided for in the law.

This means that currently existing regulations such as mask requirements in areas such as stores and schools, or access rules such as 2G and 3G, can remain in place until April 2nd at the latest.

At the same time the transition period does not allow for the continuation of caps on the number of people entering events.

The president of the German Teachers’ Association, Heinz-Peter Meidinger, warned that the rapid removal of mandatory masks in many states would open up schools to contagion.

“I am very concerned about how quickly the mask requirement is now being dropped in schools in many federal states – and this despite the fact that we are still in the midst of the Omicron wave and the infection figures are rising again,” he told Redaktionsnetzwerk Deutschland (RND).