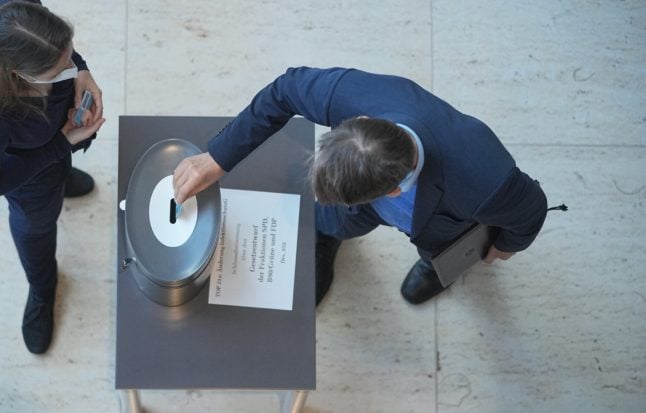 The government’s controversial plans for a Covid-19 ‘freedom day’ are to set to pass into law on Friday, ahead of the expiry of the current Infection Protection Act, which forms the basis for current measures.

On Friday morning, the Bundestag voted on the planned new legal basis for the rules, ahead of a special discussion on the measures in the Bundesrat (the upper house of parliament) on Friday afternoon.

The plans for the law include only a few general requirements for masks and tests in facilities for vulnerable groups. While masks are set to continue to be compulsory on local public transport, the proposals foresee the requirement being dropped in retail and on long-distance buses and trains.

READ ALSO: What we know so far about Germany’s ‘freedom day’ plans

According to a recent survey conducted by public broadcaster ARD, almost two-thirds of Germans are opposed to getting rid of the general mask requirement for public indoor spaces, while just over a third are in favour of it.

In an attempt to brush off criticism that the measures are too sparse, the bill put forward by Health Minister Karl Lauterbach (SPD) and Justice Minister Marco Buschmann (FDP) allows for some addition rules in so-called Covid ‘hotspots’.

With the current version of the Infection Protection Act due to expire on Saturday, the government is under immense pressure to determine the replacement rules that are due to come into force on Sunday.

Numerous federal states, however, still want to make use of an envisaged transition period and maintain current rules, such as 3G in bars and restaurants, until April 2nd.

In a special summit for federal and state leaders on Thursday, the heads of the federal states aired their criticisms of the future framework but were unable to reach a firm conclusion on how to proceed in spring.

North Rhine-Westphalia’s Hendrik Wüst (CDU), who chairs the Conference of State Premiers, called the planned new regulations “legally uncertain and practically unworkable”. This applies above all to the regulation on “hotspots” in critical locations, he said.

Chancellor Olaf Scholz (SPD), meanwhile, defended the plans. The streamlined set of rules was a “legal basis on which to build for the future”, he claimed.

Though the bill on future Covid rules doesn’t need to be approved by the Bundesrat, it could potentially be sent to the mediation committee with an absolute majority of 35 votes.

The Bundesrat is comprised of the representatives of the federal states, who could choose to voice their disapproval of the new measures in this way.

At the same time, politicians are under extreme time pressure to create a legal foundation for future Covid measures. If the Infection Protection Act is allowed to expire on Saturday with no follow-up legislation, all of Germany’s Covid-19 measures will essentially become invalid overnight.