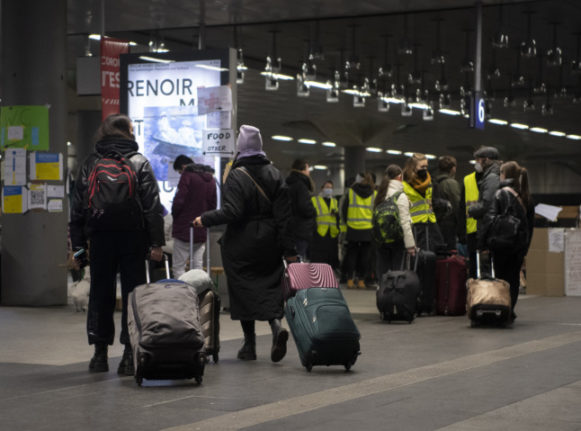 Refugees from Ukraine walk to a collection point at the main station in Berlin. Photo: picture alliance/dpa | Paul Zinken
This article will remain completely free for everyone as a service to Germany’s international community. But our coverage is only possible with our paying members’ support, so if you haven’t yet, please consider joining us to support our independent journalism. Thank you.

We’ve had a few emails from readers asking us how Germany provides practical support to refugees from Ukraine. We’ll look at parts of the country like Berlin which is heavily affected in more detail soon. First here’s an overview of what people fleeing from Ukraine – and German residents helping them – should know.

How many refugees from Ukraine is Germany expecting?

The Russian invasion of Ukraine is driving tens of thousands of people to flee their homes. According to the UN refugee agency UNHCR, two million people have now fled to Ukraine’s neighbouring countries, most of them to Poland.

Migration researcher Gerald Knaus believes it’s possible that a total of 10 million people will flee Ukraine. According to estimates, up to 225,000 people from Ukraine could seek protection in Germany.

On Monday authorities said more than 50,200 people had registered in Germany so far but the real number is likely higher. Most of the refugees are women, children or vulnerable people. That’s because Ukrainian men between the ages of 18 and 60 are not allowed to leave their home country.

Who can enter Germany freely?

Under normal circumstances Ukrainians with a biometric passport can enter Germany for 90 days without a visa, and they do not have to register with authorities during this time. To stay longer, refugees would have to register with authorities. However, EU countries have agreed to apply a special rule that will ease the process. (more on that below). 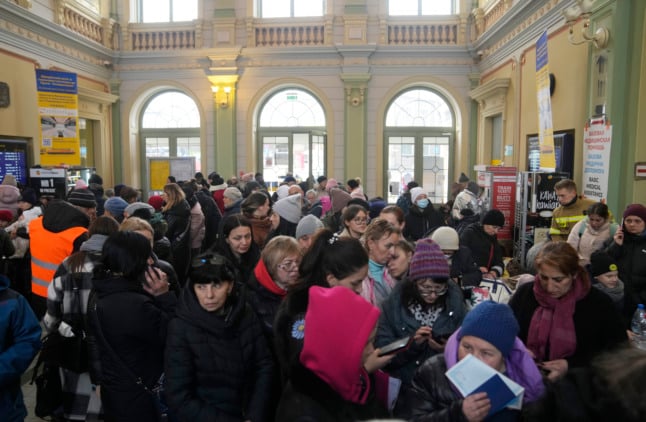 People without Ukrainian passports can also enter under certain conditions: they must have lived legally in Ukraine before the invasion of the Russian army February 24th, for example through a national or international protection status or with a student visa.

Germany’s Interior Minister Nancy Faeser (SPD) said on Sunday that refugees from Ukraine would be accepted regardless of where they are originally from.

“We want to save lives,” she said. “This does not depend on the passport.

“The vast majority of refugees are Ukrainians. People from other countries who already had a permanent right of residence in Ukraine bring this status with them,” she explained.

Faeser said that many students who are not from Ukraine want to return to their home country, but need to do it through another country due to the situation.

Faeser said there would be no upper limit on the admission of Ukrainian refugees to Germany.

“For the first time, all EU states are taking in war refugees, especially our eastern neighbours. This is a completely different situation than we have had in Europe so far.”

According to the refugee organisation Pro Asyl, however, not all EU countries fully implement these rules. They have raised concerns about some eastern EU states not allowing non-Ukrainians to enter the country as refugees. 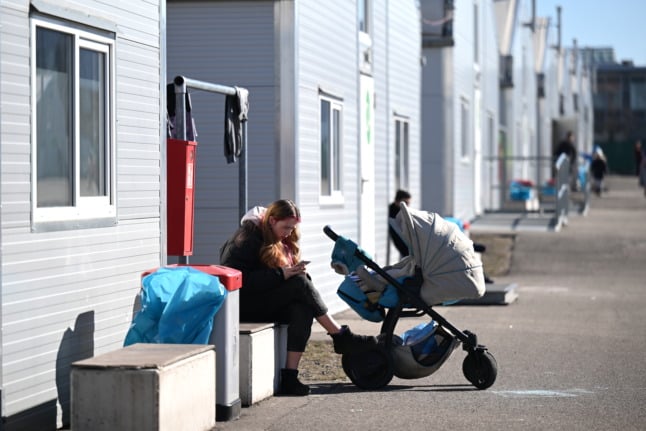 A woman with a pram sits in a reception centre for refugees from Ukraine in Leipzig. Photo: picture alliance/dpa/dpa-Zentralbild | Hendrik Schmidt

Do refugees from Ukraine have to apply for asylum?

No. After an EU meeting last week, it was decided that those fleeing the war will be granted temporary protection in all EU countries.

The Temporary Protection Directive will apply to any Ukrainians who want to come to an EU country. The corresponding regulation from Germany’s Interior Ministry is to come into force on Wednesday.

The protection status is valid for one year, and it can be extended to up to three years. It means people fleeing war in Ukraine won’t have to apply for asylum (which is a long drawn-out process) or for a visa.

If someone is suspected of having committed serious crimes or is a danger to the general public, authorities can refuse temporary protection, however.

Where do Ukrainian refugees find accommodation?

Many Ukrainians have relatives or friends in Germany. These contacts are likely to make communication and arrival much easier overall. According to the Federal Statistical Office, 331,000 people with a Ukrainian migration background live in Germany.

In the past few days, a particularly large number of people have arrived in Berlin. As in other federal states, they are accommodated in arrival centres, emergency accommodation, hotels and youth hostels.

There is still no uniform nationwide procedure for registering refugees in Germany. Ukrainians should register at initial reception centres or immigration offices so they can receive social benefits and be advised on what to do next. Despite this there have been lots of reports of confusion.

The federal government is providing 50,000 accommodation places throughout Germany, many of which are already occupied, according to the Interior Ministry.  Another 5,000 spots could be added in the short term.

Since the beginning of the week, the Nuremberg Federal Office for Migration has been assisting with the nationwide accommodation of refugees.

How many people each federal state will bring in has not yet been clarified. Usually, the so-called “Königstein Key” applies. It is calculated on the basis of tax revenue and population. According to this, Bavaria, for instance, would have to accommodate and care for about 15 percent of refugees.

Many volunteers have offered to take in people temporarily. On the site unterkunft-ukraine.de, hosts have already promised more than 260,000 beds.

How and where are people arriving?

Most people are currently arriving in Berlin by train and bus – about 10,000 people a day. Rail operator Deutsche Bahn is offering free train travel for any Ukrainian national or resident heading from Poland to Germany.

Solidarity and willingness to help are enormous, but the authorities in the capital have asked for more support.

“Berlin can’t do it alone,” said Berlin mayor Franziska Giffey at the weekend. People who have fled the war in Ukraine are also arriving in Hamburg, Bavaria and eastern German states.

What benefits do refugees from Ukraine receive, and can they work?

They initially receive a temporary secure residence title and benefits under the Asylum Seekers’ Benefits Act, which are mainly funded by the states.

Meanwhile, refugees can gain employment with the approval from immigration authorities (the Ausländerbehörde).

Yes, the EU directive provides for access to the education system of the host country. German states are preparing to admit the children to certain extra classes so that German is also taught as a foreign language.