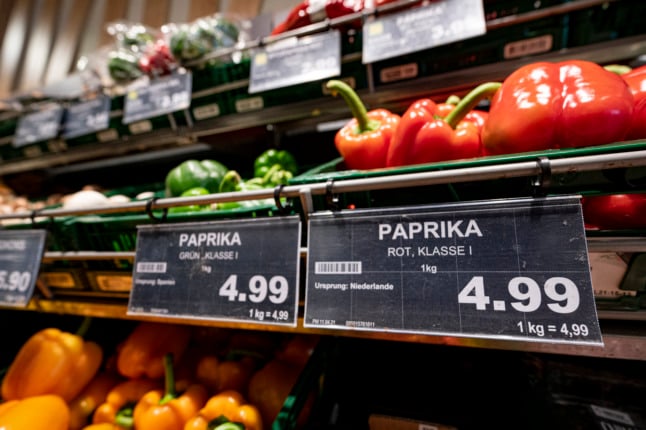 A price tag of peppers hanging on the fruit counter in a supermarket. Photo: picture alliance/dpa | Fabian Sommer

In 2021, the inflation rate in Germany for the whole year reached 5.3 percent – the highest year-end figure since 1993 – while in December, consumer prices rose at their fastest pace in almost thirty years.

Though inflation rates have dropped slightly in the first months of 2022, consumer prices are continuing to rise, due to higher costs for energy, supply chain disruptions due to the pandemic, housing shortages and even the semiconductor crisis in the automobile industry.

In January, consumer prices rose by 4.9 percent overall, housing costs rose by 5.2 percent and transport and leisure costs increased by 10.6 and 5.4 percent, respectively.

Increased energy prices have been behind a lot of the cost hikes. They have affected everything from transport costs to the cost of heating facilities like warehouses and offices, which are now being passed on to consumers.

In February, consumers had to pay 5.3 percent more for groceries than 12 months earlier, according to the Federal Statistical Office. In addition, large German breweries announced several price increases, as did manufacturers of toilet paper and products such as beef, poultry and tomatoes got a lot more expensive.

In response to the rising cost of living, Germany’s coalition government agreed a relief package of €13 billion in February to help ease the pressure.

Some of the measures in the relief bill included a halt on the green electricity levy for German residents from July onwards and a higher flat rate of tax-deductible travel for commuters.

What impact is Russia’s invasion of Ukraine likely to have?

With Russia being one of Germany’s main energy suppliers, the crisis is likely to keep pushing the price of gas and oil up.

On Sunday, petrol and diesel prices reached record highs in Germany, with the average price for a litre of Super E10 climbing to €1.965 and diesel to €1.984.

The increase in diesel costs seems to have a direct link to the Russian invasion of Ukraine, because 15 percent of the diesel sold in Germany in 2019 came from Russian refineries, and the cost has risen by almost twelve cents per litre since last week, according to the German Economic Institute (IW). 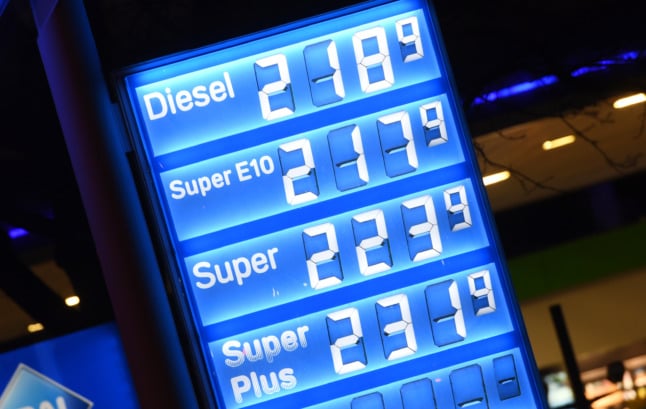 The war in Ukraine also caused immediate price jumps in natural gas, which is mostly used for heating and electricity generation. For the time being, there are no signs of the situation easing. In fact economists expect energy prices to continue rising.

Will this have a knock-on effect on grocery bills?

Experts believe so. In an interview with the Germany press agency DPA, the Managing Director of the Cologne Institute for Retail Research (IFH), Boris Hedde said: “The increase in energy prices and logistics costs due to the Ukraine war will be felt by people in their everyday lives, and that means every time they shop in a supermarket or at a discounter.”

Trade expert Robert Kecskes from the market research company GfK told Focus Online: “The conflict will increase the pressure to raise prices even more. The inflation will certainly be considerable.”

As the war impacts on energy costs, the production of many products, from bread to detergent, is also becoming more expensive. “Everyone works with electricity and gas – including Nestlé and Unilever,”  Kecskes pointed out.

READ ALSO: How will the Russian invasion affect Germany’s gas supplies and prices?

For example, in the case of meat, increased energy costs affect every stage of production – from seed production for the animal feed to transportation to freezing costs in the supermarket. 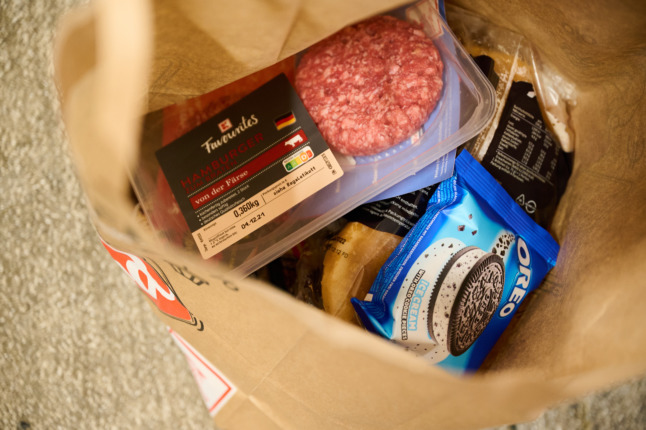 A bag of groceries in a Berlin supermarket. Photo: picture alliance/dpa | Annette Riedl

“The producers will certainly try to pass on these additional costs to the trade and consumers,” Kecskes said.

Chief executive of the German Retail Association (HDE), Stefan Genth, also warned that the Russian invasion in Ukraine, and the sanctions imposed as a result “could have a price-driving effect”.

The head of the World Food Programme, David Beasley, has also warned that the conflict in Ukraine could see global food prices soaring, reported the BBC.

Ukraine and Russia are both major exporters of basic products – but the war has already hit crop production, which drives up prices.

How is this likely to affect consumer behaviour?

At the height of the pandemic, German consumers tended to spend more money in large supermarket chains and to turn away from discount stores. However, it’s now likely that this trend could reverse.

“The expected price increases could change shopping behaviour and ensure that more shopping is carried out at the discounters again, and that they regain lost market share,” Hedde believes.

Market researcher Kecskes also predicts that consumers will reach for the retailers’ own brands more often than in the past years instead of the more expensive brand-name articles.

A small consolation for supermarket customers is that special offers are expected to increase as competition for customers’ tighter household budgets is likely to intensify.

“We will intensify our military cooperation, especially in the Baltic Sea region and through joint exercises,” Scholz said amid concern for the two candidates’ security during the transition period to NATO accession.

“It is already clear that our countries are bound together by an obligation to provide each other with all possible assistance and support for mutual protection” as members of the United Nations and the European Union, Scholz added.

“Both countries can always rely on our support, especially in this very special situation,” he said.

Germany has been hiking up military spending and changing decades-held policies in the wake of the war on Ukraine, which began when Russia invaded its neighbour on February 24th this year.

READ ALSO : Zeitenwende: How war in Ukraine has sparked a historic shift in Germany

With Moscow pressing its assault in eastern border regions of Ukraine nearly three months into its invasion, Helsinki and Stockholm are poised to give up decades of military non-alignment over fears they could be next.

Swedish Prime Minister Magdalena Andersson confirmed on Monday her country would apply to join NATO, a day after Finland — which shares a 1,300-kilometre (800-mile) border with Russia – said the same.

Russian President Vladimir Putin, whose war has sparked global outrage, said the move poses “no direct threat for us… but the expansion of military infrastructure to these territories will certainly provoke our response”.

NATO secretary general Jens Stoltenberg told a meeting of the alliance in Berlin on Sunday that it would “look into ways to provide security assurances including by increasing NATO presence in the region” during the transition period.

“Finland and Sweden are concerned about the interim period… we will try to speed up that process,” he said.