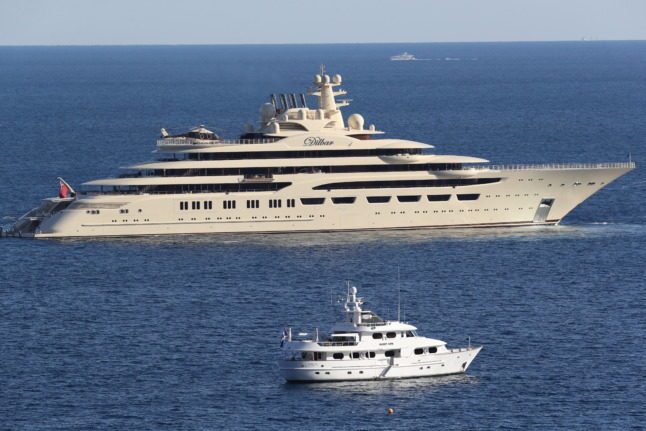 The Handelsblatt daily and other German media reported the seizure of the yachts including the “Dilbar”, the world’s biggest by tonnage and owned by the Russian billionaire Alisher Usmanov.

Susanne Meinecke, a spokeswoman for Hamburg’s economy and innovation authority, said the reports were not true and told AFP: “To my knowledge, no yachts have been seized.”

However, the vessels are unlikely to leave Hamburg any time soon since all goods transported to Russia from the German port now require individual customs permits.

The “automatic release of goods to Russia” has been stopped, Hamburg economics senator Michael Westhagemann said Tuesday, meaning “no more goods are going out to Russia as of now”.

Usmanov was one of several Russian billionaires named on the European Union’s sanction list in response to the invasion of Ukraine.

According to a report by Forbes that later went viral, his 156-metre luxury yacht ‘Dilbar’ – believed to be the largest superyacht in the world by tonnage – had been confiscated by Hamburg authorities on Wednesday.

The €600m yacht is currently located in the yards of local shipbuilding firm Blohm and Voss for repairs, but has not been taken into the government’s ownership.

Usmanov is believed to have purchased the 15,917-tonne vessel from German shipbuilding firm Lürssen, who custom-built it over a period of around 52 months and sold it at a €600m price-tag in 2016.

According to the company, it is “one of the most complex and challenging yachts ever built, in terms of both dimensions and technology”. It apparently boasts the largest swimming pool ever installed on a yacht, as well as two helicopter pads, a gym, beauty salon and sauna.

After reading unconfirmed reports that the yacht had been seized by authorities, Ukrainian Interior Minister Anton Geraschenko quipped on Telegram that it should be refitted as a missile cruiser and delivered to Ukraine.

There had allegedly been rumours about military-style defence systems located on the yacht when it was first built and sold to Usmanov.

“Dilbar has the most advanced security technologies of any superyacht in the world,” Lürssen CEO Peter Lürssen said at its launch. “But the things you read about it containing an anti-aircraft missile defence system are all nonsense.”

Though the seizure of the yacht has been denied, Usmanov, 68, is still likely to be hit by punishing Western sanctions over Russian President Vladimir Putin’s invasion of Ukraine.

On Wednesday, the English Premier League football club Everton suspended its sponsorship agreements with several companies in which Usmanov had a stake.

The EU declaration said Usmanov “has been referred to as one of Vladimir Putin’s favourite oligarchs”.

“He is considered to be one of Russia’s businessmen-officials, who were entrusted with servicing financial flows, but their positions depend on” Putin, it said.

It comes as other European countries gear up to seize luxury properties, yachts and other multi-million-euro assets from individuals believed to be linked to Vladimir Putin and the Kremlin.

As reported by The Local on Monday, France has also been busy making a survey of yachts, vehicles, real estate and other financial assets belonging to Russian oligarchs with the aim of the seizing the sanctioned property.

This could include several of the mansions and yachts dotted along the French Riviera – an area that has long been a playground for super-rich Russians.

Following Germany’s dramatic about-turn on delivering weapons to conflict zones, a number of arms purchased by the German government were reported to have reached Ukraine on Wednesday evening.

According to DPA, Germany plans to deliver more weapons to Ukraine shortly.

The Ministry of Economics has approved the delivery of 2,700 anti-aircraft missiles taken from the stocks of the National People’s Army – the ‘Bundeswehr’ of the GDR.

Meanwhile, thousands of people continue to take to the streets in cities around Germany to call for peace.

In a protest held on Munich’s Königsplatz on Wednesday evening, an estimated 45,000 people gathered to express their anger at the ongoing war.

Speaking at the event, Bavarian state premier Markus Söder told the crowd: “Tonight we are all Ukrainians.”

The demo followed similar events in Berlin and Cologne that saw hundreds of thousands of protesters in attendance.

An earlier version of this article reported that the superyacht belonging to Alisher Usmanov had been seized by authorities. This has now been corrected.