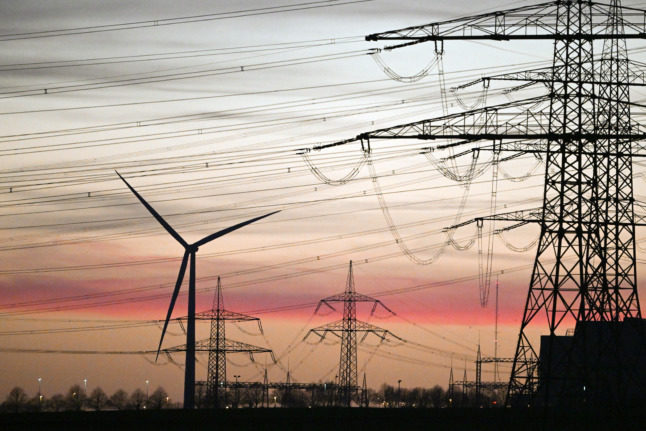 In response to Russian aggression last week, German chancellor Olaf Scholz announced a halt to the Nord Stream 2 project – a pipeline which was set to increase gas imports from Russia to up to 70 percent of Germany’s total deliveries. Although the pipeline was not yet in use, and will therefore not immediately impact on energy supply, it serves as a reminder of Germany’s close ties to Russian energy sources.

How dependent is Germany on Russia for its energy supply?

In 2021, Germany imported crude oil and natural gas worth €19.4 billion – an increase of 49.5 percent and accounted for 59 percent of all imports from Russia.

Oil imports are mainly processed in refineries into fuel and diesel, but are also used for heating. Many companies also use oil as a raw material and manufacturing lubricant. 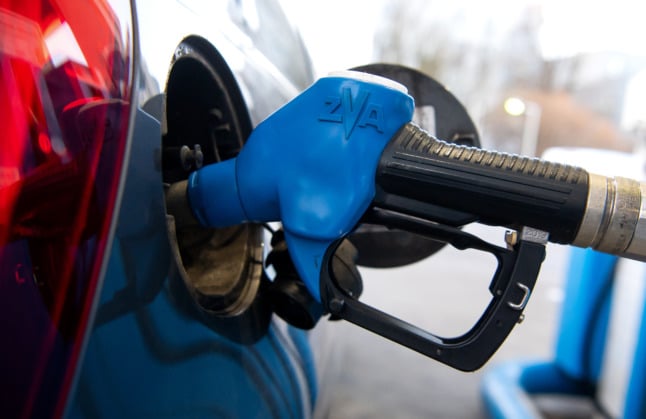 A fuel nozzle in the tank opening of a vehicle at a petrol station. Photo: picture alliance/dpa | Sven Hoppe

Gas is mostly used for heating and electricity generation, though industry – especially steel manufacturers – need natural gas for certain processes, as do fertiliser and plastics manufacturers.

Will supplies last for the rest of the winter?

As the dependence on Russian energy supply is greatest in the gas sector, energy experts have been concerned for weeks about the level of supply to the German and European gas storage facilities.

But, provided that the winter continues to be relatively mild, Germany is expected to get through it safely. According to Federal Economics Minister Robert Habeck (Greens), this is true even in the event that prices for natural gas continue to rise or Russia reduces or completely cuts off gas supplies.

READ ALSO: Germany can do without Russian gas, says minister

Chairman Timm Kehler of the industry association Zukunft Gas told the German Press Association: “We are observing the current supply situation very closely and can say, at least in the short term, that the gas supply for Germany is secure. Heating customers in particular need not worry because of their particularly protected legal position and diversified gas purchases from other countries.”

According to Minister Habeck, further measures have already been initiated for the next winter of 2022/2023, with owners of gas storage facilities being obliged to fill the storage facilities before the start of winter. The corresponding law to secure gas reserves is also already in preparation and should be passed soon.

But in the long term, the Minister Robert Habeck said that Germany’s “hunger” for gas must be reduced as much as possible and that the German government would present a gas reduction plan “very promptly”.

The Minister of Economy also wants to look for new supply partners for oil. Here, however, the situation is less dramatic because of the national oil reserve, which means that oil supplies are currently sufficient to meet demand for another 90 days. “We are on the safe side with oil,” he said.

Habeck also announced that a similar reserve should now also be created for coal. In 2021, Germany still purchased around 18.5 million tonnes of hard coal.

A return to coal and nuclear power?

The war in Ukraine has also prompted a new debate in Germany about a return to a wider use of coal and nuclear power.

The traffic-light coalition government had planned to phase-out coal use in Germany by 2030. But in light of potential energy shortages due to the conflict with Russia, ministers have been vocalising the possibility of a short-term return to coal.

When asked whether the Greens would now have to postpone a coal phase-out by ZDF on Sunday, foreign minister Annalena Baerbock (Greens) said: “Yes, that is the price we too are paying for this war by Mr Putin.” Germany’s solidarity with Ukraine will “also have a price for us here, economically, financially”, she said.

Earlier on Sunday, Federal Economics Minister Robert Habeck also said that he had not ruled out longer operating times for coal and nuclear power plants in Germany. 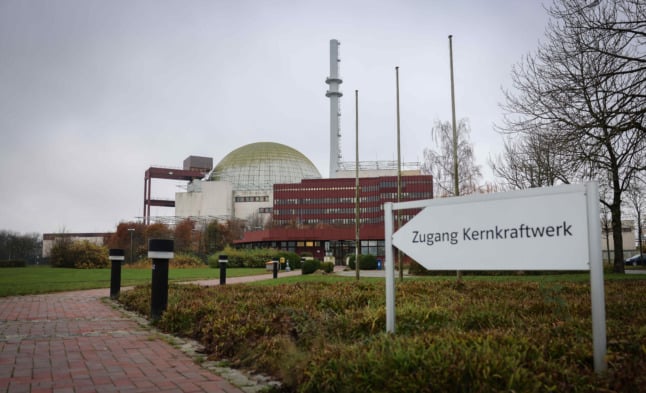 Last week, the global stock markets reacted sharply to Russia’s military aggression: from Wednesday to Thursday, a megawatt hour of gas on the market became 43 percent more expensive. The gas price ultimately determines the heating costs and, though tenants will not notice the price increases immediately, in a few months or even next year they are likely to see a spike when the service charges are billed.

But Minister Habeck’s assessment is that prices would “level off again in the medium term with a view to the world market”. They are also looking at a wide range of measures to ease the burden of the price increases on low-income families.

Speeding up a move to renewable energy sources

Although it seems that German energy supplies will survive the next winter, Minister Habeck emphasised that it is now necessary to reduce dependence on all three fossil energy sources – oil, gas and coal – as quickly as possible. “Today at the latest, even those who are ‘not so keen’ on climate protection must realise that independence from as many fossil energy sources as possible is a strategic and a security policy issue”, Habeck said.

In the medium and long term, however, the focus is on a significantly faster expansion of green electricity from wind and solar power in Germany, which should above all also dampen prices. Habeck said that he wants to remove existing major obstacles to significantly expanding the number of wind and solar energy sites and that the “sleepiness” in approaching expansion must now be overcome.

Could other countries help out?

At the EU level, there is a solidarity mechanism under which EU countries are supposed to share gas reserves in an emergency, especially to protect households from shortages.

The EU Commission is also currently trying to secure additional supplies of gas and liquefied natural gas (LNG) to the EU. According to official information, talks are underway with Azerbaijan, Egypt, Nigeria and Norway, among others.

The Japanese government has also pledged to redirect surplus liquefied natural gas supplies destined for Japan to Europe andthe Gulf state of Qatar also wants to give up surplus supplies. The Qatari ambassador in Berlin said the country was in principle prepared to make larger gas deliveries to Germany. Overall, the EU Commission says that the EU is on the safe side this winter even in the event of a complete disruption of Russian gas supplies. 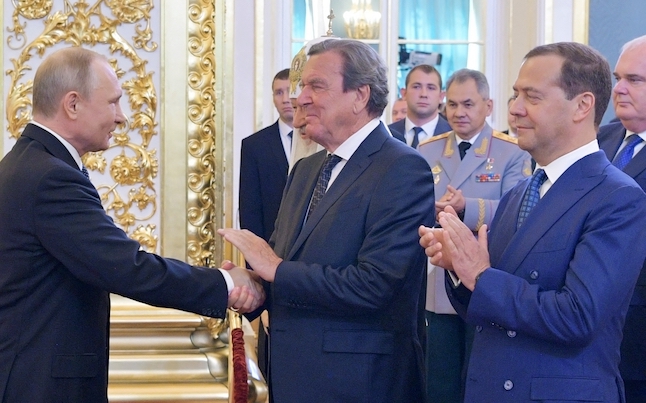 Schroeder, who is a lobbyist for Russian gas, sparked fresh outrage after he told the New York Times that he would only give up his links if Russia stopped delivering gas to Germany. He said he did not believe this would happen.

There should be “consequences” for Schroeder’s refusal to sever ties with several Russian groups and his failure to condemn the invasion of Ukraine, Finance Minister Christian Lindner told the Funke newspaper group.

It is “no longer conceivable that an office is made available to him paid for by the taxpayer”, Lindner said.

As former chancellor, Schroeder has the right to several offices in the German parliament and a budget for staff. The perks cost the taxpayer €400,000 ($422,000) per year.

“The former holders of high-level posts, who are clearly on the side of criminal governments, cannot count on state support,” Lindner said.

Schroeder’s perks could be reduced during debates for the 2023 budget.

“It would be wise to streamline the facilities of former high-level officials and to reduce them over time. In this context, we should also
discuss some sort of code of honour regarding behaviour,” liberal FDP party leader Lindner said.

The FDP is part of the coalition led by Chancellor Olaf Scholz.

Pressure is growing on Schroeder, 77, and he has become a troublesome figure for Scholz, who he mentored.

Several cities have withdrawn his honours and there are mounting calls on Scholz’s centre-left Social Democrats (SPD) to expel their former leader.

Most former European leaders who had ties to Russian businesses before the Ukraine war have resigned from their roles.

Schroeder is president of the shareholders’ committee of Nord Stream AG, the controversial pipeline between Russia and Germany which for the moment does not have an operating licence.

He also has a senior position with Rosneft, Russia’s main oil company.

Before the invasion, Germany reached out to Russia, believing that developing trade ties would encourage democracy to gradually flourish in the country.