Boring to 'historic': the awakening of Germany's Olaf Scholz

Often described as predictable and "robotic", Chancellor Olaf Scholz has become emboldened since Russia's invasion of Ukraine, smashing policy taboos to steer Germany into "a new era" that could reshape its role on the world stage.

Just a few weeks ago, German media were openly asking "where is Scholz?", slamming the Social Democrat's perceived lack of leadership on pressing issues like the coronavirus pandemic and worsening Ukraine crisis.

But Moscow's attack on Ukraine last week has jolted the chancellor into action, culminating in what commentators have called a "historic" speech on Sunday.

Scholz, who has only been in office three months, spoke with uncharacteristic clarity when he unveiled a slew of defence and foreign policy shifts that promise to upend Germany's decades-long reluctance to raising its military profile.

"The Ukraine crisis has changed the chancellor. And now he's changing our country," the top-selling Bild daily wrote.

Addressing an emergency parliamentary session, Scholz told the nation that "we are now in a new era".

In a country haunted by post-war guilt, Scholz assured Germans that they were "on the right side of history" as Ukraine's allies.

Among the headline-grabbing announcements was a pledge to earmark 100 billion euros ($113 billion) this year alone to modernise the chronically underfunded the army, called the Bundeswehr.

His coalition government had earlier already reversed a ban on sending weapons to Ukraine, and halted the Nord Stream 2 gas pipeline between Germany and Russia. 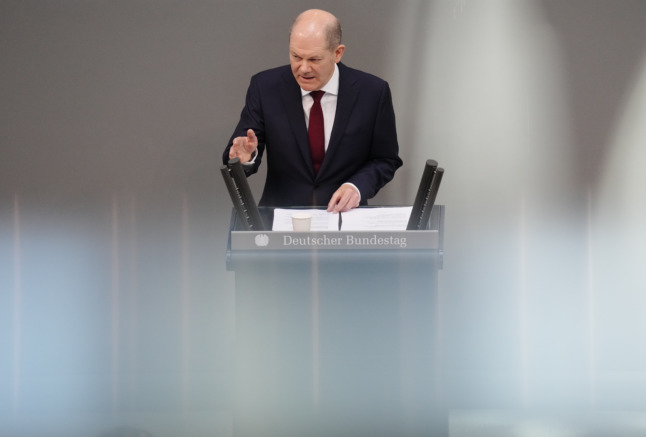 The move came as a relief to the United States and European partners, who had begun to question Berlin's resolve in standing up to Moscow.

Some observers have speculated that it was perhaps no coincidence that Russian President Vladimir Putin timed his invasion after the departure of veteran chancellor Angela Merkel.

He had built a working relationship with her based on mutual respect and a shared history of living in ex-communist East Germany.

But if he sensed weakness in Berlin while the new government found its footing, his radical actions appear to have galvanised not just Scholz, but the nation.

More than 100,000 people took to the streets in Berlin at the weekend to protest against Russia's invasion.

READ ALSO: IN PICTURES: Over 100,000 march for Ukraine in German capital

Der Spiegel weekly, which once described Scholz as "the embodiment of boredom in politics", praised the chancellor for displaying "the leadership that had been missing in recent weeks".

"Scholz, who is often rhetorically vague, has left no doubt about his determination," Spiegel wrote.

But Scholz has surprised observers before.

He also came from behind to win last year's general election, staying true to his boring-but-reliable persona while avoiding the gaffes that brought down rivals from the Green party and from Merkel's conservative camp.

He now heads Germany's first-ever three-way coalition, consisting of the Social Democratic Party (SPD), the Greens and the pro-business FDP.

Scholz's policy reversals mark a turning point for his centre-left SPD, which has historically championed close ties with Russia.

READ ALSO: EXPLAINED: How the Ukraine crisis could impact Germany

Russia's war-mongering is a "rude awakening" that has forced the SPD "to throw decades-old convictions overboard", the conservative Frankfurter Allgemeine daily wrote.

Scholz has also distanced himself from former SPD chancellor Gerhard Schroeder, whose close friendship with Putin and Russian business dealings have become an embarrassment to the party.

At the same time, Scholz's new path marks a sharp break with the commerce-driven pragmatism of the Merkel years in dealing with Russia.

Merkel's emphasis on trade and dialogue with an increasingly belligerent Moscow during her four terms in office will now be seen in a different light, political scientist Ursula Muench told AFP.

"We will no longer praise her negotiating skills, but ask whether she and her government were too naive about Putin," she said.