Germany said Saturday it was working on excluding Russia from the Swift interbank system in a "targeted and functional" way that would limit any collateral damage.

"We are working at the same time urgently on limiting the collateral damage from an exclusion from Swift so that (the measure) hits the right people," Foreign Minister Annalena Baerbock and Economy Minister Robert Habeck said in a joint statement.

"What we need is a targeted and functional limitation of Swift," they added.

More EU nations – including France and Italy – have been moving to exclude Russia from using the Swift banking network, but Germany has been more cautious.

Russian gas makes up a higher share of energy supplies in Germany and other parts of Europe than in France, which backs the move.

Swift's messaging system allows banks to communicate rapidly and securely about transactions, and cutting Russia off would cripple its trade with most of the world.

"There is already almost full support from the EU countries to disconnect Russia from Swift. I hope that Germany and Hungary will have the courage to support this decision," Zelensky said earlier in a video address posted online.

The Hungarian government has angrily denied suggestions it had blocked moves to exclude Russia from Swift.

'Unyielding egoism'
Ahead of a meeting with German Chancellor Olaf Scholz, his Polish counterpart Mateusz Morawiecki criticised the "unyielding egoism that we see in certain Western countries, including here in Germany". 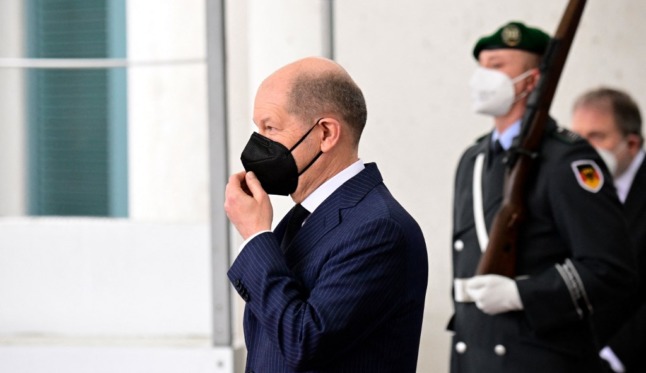 German Chancellor Olaf Scholz waits for the Polish Prime Minister and the Lithuanian President on February 26th, 2022 at the Chancellery in Berlin, as they meet for talks following Russia's invasion of Ukraine. (Photo by Tobias SCHWARZ / AFP)

He urged Berlin to "finally decide on sanctions that are actually crushing", including the exclusion from Swift.

Earlier this week, German Finance Minister Christian Lindner said he was "open" to including Swift in the EU's sanctions response package.

But he added that it "would mean that there is a high risk that Germany will no longer receive gas, raw material supplies from Russia".

Iran has been disconnected from the Swift system in the past over its nuclear programme.

Russia meanwhile has been developing domestic financial infrastructure to counter such a threat, including the SPFS system for bank transfers and the Mir card payments system.

Cutting off Russia could complicate remaining trade with Europe.