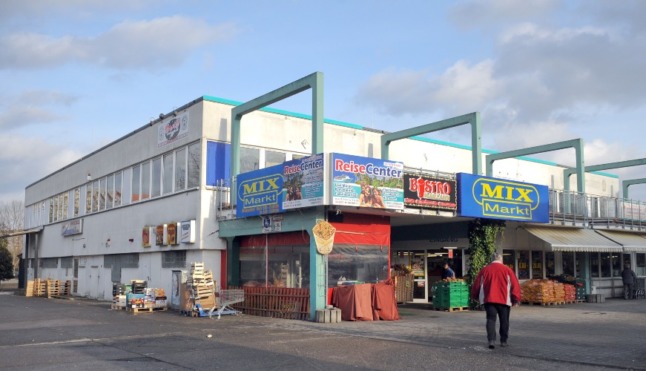 A Russian supermarket in the Mazahn district of Berlin. Photo: dpa | Britta Pedersen

Some say they’re appalled by Putin, others defend the “great” Russian president and denounce Western “propaganda” against their homeland.

In Berlin, the German capital which was cleaved down the centre by the Wall during the Cold War, the tensions are palpable.

“I am really scared and am furious at the same time with Putin,” 29-year-old Maria Khristine, who works in management, told AFP.

She has lived in Berlin since 2015 to pursue her studies “but also to escape Russia”.

She lives in the western district of Charlottenburg, nicknamed Charlottengrad in the 1920s for its large number of Russian emigres, and is
among some 3.3 million people in Germany from the ex-Soviet Union.

About 151,000 of them live in Berlin, which was carved into Western and Soviet sectors until reunification in 1990 and still bears the architectural and cultural imprint of the division.

The eastern districts of the capital are home to vast memorials to the fallen Red Army soldiers of World War II, and the imposing Russian embassy occupies a prime spot on the Unter den Linden boulevard near the Brandenburg Gate.

“I was expecting this attack, which is nothing but a shameless power grab by the Russian president,” said Khristine, whose great grandparents were Ukrainians.

She fears that “nothing will stop him, not even the sanctions: I am very fatalistic”.

On the other side of the city in former East Berlin, the mood veers between grim and defiant.

“We must always oppose all wars – they lead to nothing,” said a man in his 30s who gave his name as Igor, standing outside a Russian Orthodox church.

Suddenly, an Orthodox priest emerging from the building rushes at him and forbids him to speak any further.

“The church is divided on this delicate subject because it is very political,” he insists to AFP before hurrying away.

In the Marzahn district, the site of sprawling prefab housing estates built under communism, Sergei Vladim, 63, is of two minds about the Russian attack.

“The bombings are not a solution but at the same time it is not normal for NATO to try to expand to eastern Europe,” said the pensioner, who arrived in Germany in 1994 with his parents.

“Putin took that as an act of aggression.”

Ukrainians ‘belong to us’

A little further on, in front of a huge mural of cosmonaut Yuri Gagarin, customers of a Russian supplies shop pass each other without speaking.

“It’s very serious but I expected it. It’s unjust,” said Vira, a Ukrainian customer pushing a stroller who declined to give her surname.

She would like to take in her cousins who are trying to flee Kyiv but “are stuck in traffic jams”.

“The Russians are terrorists!” shouted one passer-by in the parking lot before climbing into his car.

It’s an outburst rejected by Mila Svetlana, 53, who says she is still counting on diplomacy to end the fighting.

Nevertheless, she believes the “great” President Putin “has only responded to the attacks on the separatists” in eastern Ukraine, whose independence she backs.

“He was right and only fired on the Ukrainian army,” says the Russian, who gets her news via the pro-Russian channel RT and “on WhatsApp messaging”.

A 36-year-old man who called himself Digat and has lived in Germany since childhood agreed.

“Western media keep saying Putin is the bad guy, but that’s pure propaganda. Russia has been defending itself against Western provocations for a long time. Now its patience is over,” he said.

“We are one people with the Ukrainians. There should be no borders because they belong to us.”