EXPLAINED: How the Ukraine crisis could impact Germany

Following the Russian invasion of neighbouring Ukraine, western leaders are gathering for emergency talks and are set to hit Moscow with a fresh wave of sanctions. The Local looks at Germany's response to the crisis and how the country could be affected.

After days of mounting concerns about an eruption of war in Europe, the worst fears of world leaders have been realised: Russia has declared war on Ukraine.

According to the latest reports, Russian troops and fighter planes have entered through the eastern borders of the country and are closing in on the capital, Kyiv. Many believe the endgame is to depose Ukraine's democratically elected government and, in line with Vladimir Putin's revisionist world-view, attempt to redraw the borders of Europe.

The move has prompted European nations to gather for crisis talks to decide on far-reaching sanctions on Russia and additional support for Ukraine. Separated from Ukraine by just one nation - Poland - Germany is unlikely to be left unscathed by the crisis.

How have German officials responded?

After the news of the attack broke overnight, the Brandenburg Gate was lit up in the colours of the Ukrainian flag in a gesture of solidarity as spontaneous protests erupted in support of the Ukrainian government.

In a brief but powerful statement on Tuesday morning, Chancellor Olaf Scholz (SPD) described the news as a "terrible day" for Ukraine and a "dark day" for Europe.

"The Russian attack on Ukraine is a blatant breach of international law. There is no justification for it. Germany strongly condemns this ruthless act by President Putin," he said.

The Chancellor is set to make an emergency statement in the German parliament on Sunday and has warned of further sanctions.

Writing on Twitter, Foreign Minister Annalena Baerbock also threatened "massive sanctions" as she described the actions of Russia as "unjustifiable".

"Today we are waking up in a different Europe, in a different world," she wrote. "With the military attack on Ukraine, the Russian government is breaking the most fundamental rules of the international order, right in front of the eyes of the world.

"Ukrainians have done nothing, nothing that justifies this bloodshed. This war is designed to destroy one thing: the hope of the people of Ukraine. President Putin, you will never be able to destroy their longing for democracy and peace."

Baerbock said Germany would be meeting with the leaders of Nato, the G7 and the EU to discuss a coordinated response.

Will the country send weapons to Ukraine?

Though Germany has provided around $2bn in financial support to Ukraine over the past eight years, it has point-blank refused to send arms into the region - and this position doesn't look set to change.

Since the Second World War, the country has generally pursued a strict policy of restraint in military conflicts, with the notable recent exception of Afghanistan. However, the situation in Russia and Ukraine is particularly sensitive for Germany due to its Nazi history: millions of people in both Russia and Ukraine were murdered by the fascist regime.

Instead, Germany has sent 550 soldiers to bolster Nato forces in Lithuania and has promised 350 additional troops in the region.

However, concerns are also growing about the limited military resources the country has, which will make it difficult for it to support Nato further.

Alfons Mais, the chief of the German land army, wrote on a post on the social network LinkedIn that "the options we can offer to politicians to support (NATO) are extremely limited." The Bundeswehr (army) is "more or less bare," he wrote.

Annegret Kramp-Karrenbauer, who was defence minister in Angela Merkel's cabinet, said Germany had forgotten lessons from the past that "negotiation always comes first, but we have to be militarily strong enough to make non-negotiation not an option for the other side".

"I'm so angry at ourselves for our historical failure. After Georgia, Crimea, and Donbas, we have not prepared anything that would have really deterred Putin," Kramp-Karrenbauer tweeted, referring to incursions carried out by Russia while Merkel was in power.

In some ways, Germany has already announced its most hard-hitting sanction: the indefinite postponement of approval for the €10 billion Nord Steam 2 pipeline, which would have seen Russia delivering a significant proportion of the country's natural gas supplies.

When Chancellor Scholz announced the move on Tuesday afternoon, however, he promised that more would follow if Putin escalated the situation further. These could involve targeting wealthy individuals who support Putin's regime, further sanctions on Russian banks and bans on trading with certain Russian companies.

On Thursday, Economy Minister Robert Habeck, signalled that there'd be a "strong sanctions package" that would "cut off the Russian economy from industrial progress, attack and freeze assets and financial holdings, and dramatically limit access to the European and American markets."

How does this affect the German economy?

According to the German-Russian Chamber of Commerce (AHK), around 3,651 German companies are currently still active in Russia and are likely to be directly impacted by the crisis. "German companies are thus among the most active foreign investors in Russia," a spokesperson for the Association of German Chambers of Industry and Commerce (DIHK) told Tagesschau. "In addition to the high need for modernisation and the good image of the brand 'Made in Germany', it is above all the comparatively high-profit margins that attract them."

An escalating conflict will hit these companies hard and have ramifications for financial markets and the wider economy. When the German stock exchange (DAX) opened this morning, it had slumped by five percent amid news of the invasion.

According to DZ-Bank, Russia recently ranked 14th among the most important destination countries for German exports, with 1.9 percent of German exports going to Russia. On the import side, it's the 12th most important trading partner, with 2.8 percent of all imports to Germany coming from Russia. According to the Federal Statistical Office, the main goods traded between Russia and Germany were raw materials, vehicles and machinery.

In 2021, German exports to Russia jumped to €26.6 billion annually, so far-reaching sanctions will definitely place a dent in the treasury's revenues.

What does it mean for the cost of living?

Experts generally concur that the war in Ukraine will exacerbate the spiralling cost of living crisis. Though the Nord Stream 2 announcement was deeply symbolic, Germany had not yet received any deliveries of natural gas through the pipeline, so it won't be hit by immediate losses to its reserves.

However, fears that Russia will stifle the supply of gas into Europe in retaliation for sanctions has already caused energy prices to soar to unpredecented highs. This is likely to hit households directly, driving up the price of energy bills further and increasing the cost of living as businesses pass on their higher costs to consumers. 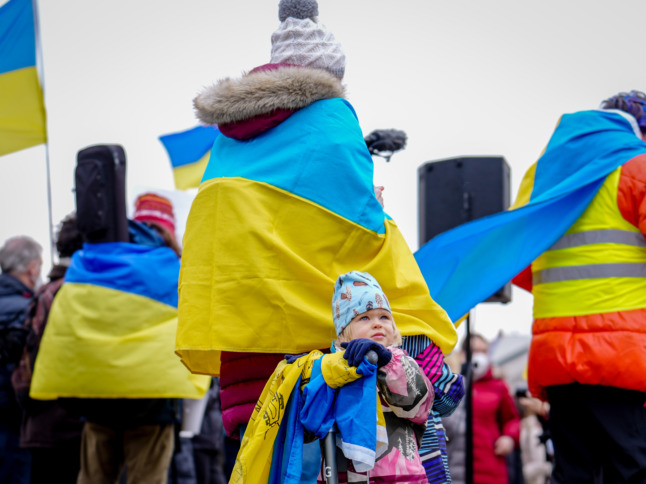 Announcing the decision to pause the controversial pipeline project, Economy Minister Robert Habeck (Greens) warned that energy prices would undoubtedly rise in the short-term, though he vowed to take steps to mitigate the impact on consumers.

There is also a consensus that current gas reserves would be enough to carry Germany through the rest of the winter - even if deliveries were to cease entirely. As the government sets its sights on renewable energy projects, it hopes that it will soon be able to end its dependence on Russian gas entirely, though in reality, this will take a number of years.

Disruptions to wheat and corn shipments could also have a knock-on effect on food prices. According to Bloomberg, Ukraine is an agricultural powerhouse that's responsible for around 25 percent of global wheat trade and around 20 percent of corn sales. Issues with producing and delivering these shipments would send shockwaves through the global economy and could hit German consumers hard.

Ukraine is home to around 44 million people, almost three million of whom live in Kyiv. As Russian forces approached, images were shared on the internet of endless traffic jams as people attempted to flee west out of the capital.

In a speech made this morning in response to the invasion, Berlin's mayor Franziska Giffey spoke of the impact the conflict would have on the capital and said Ukrainian refugees would be likely to come to Berlin if the situation deteriorated further.

According to a spokesperson, however, the Federal Ministry of the Interior is "prepared for conceivable scenarios" but doesn't believe the likelihood of refugees coming to Germany can be seriously assessed at the present moment.

Federal Interior Minister Nancy Faeser said she was in close contact with the Polish government and the EU Commission with regard to refugees fleeing to neighbouring countries such as Poland. According to the ministry, the German government will "massively support" other EU countries, especially Poland, in the event that a huge influx of Ukrainian refugees arrives there.

This would primarily involve "humanitarian support".

Meanwhile, the Association of Towns and Municipalities has called on state and federal governments to start preparing for an influx of Ukranian refugees.

"We expect close coordination between the federal government, the states and the municipalities in order to have enough time for comprehensive preparation," Gerd Landsberg, the association's managing director, told Handelsblatt. This would involve releasing funds and preparing accommodation.

According to the Federal Office of Statistics, there were around 145,515 Ukrainians living in Germany as of 2020, with numbers of Ukrainian immigrants rising sharply in the wake of the 2014 Russia attacks.