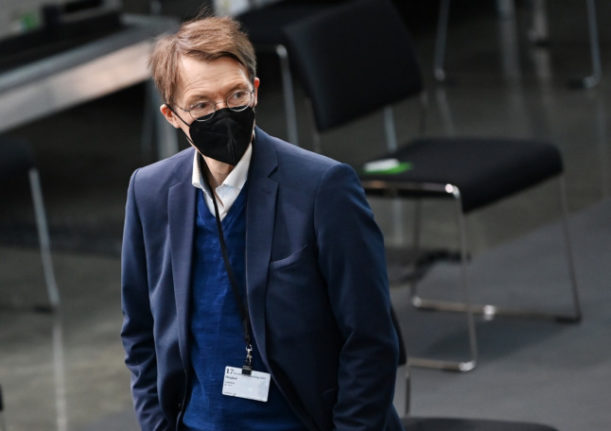 Following a controversial decision to shorten the duration of the Covid recovery status to three months, Lauterbach wants to remove the authority to decide on vaccination and recovery status from the Robert Koch Institute (RKI).

“I would like to decide on far-reaching decisions such as recovery status myself and in a direct manner,” Lauterbach told the newspaper Bild on Wednesday. “Otherwise I bear the political responsibility for the actions of others.”

According to Bild, the SPD has included a sentence in a set of draft proposals ahead of a meeting of federal and state leaders on Wednesday that would see this power transferred back to the Health Ministry.

The RKI and Paul-Ehrlich Institute were given joint control over definitions of Covid vaccination and recovery status at the start of January this year.

But just a few weeks later, the RKI opened itself to criticism when it decided to halve the amount of time during which someone could count as recovered from six months to three without warning.

With the sudden change, many people found themselves stripped of access to these venues overnight.

There has also been confusion about the clash with EU rules, which dictate that the recovery status is valid for up to 180 days, rather than Germany’s 90.

In a recent clarification, the RKI also indicated that different lengths of recovery apply to the vaccinated and unvaccinated, leading to yet more confusion as pharmacists scrambled to change their certificate-issuing practices.

READ ALSO: How German pharmacies are extending the ‘recovery’ status for vaccinated people

Following the change, the liberal FDP singled out Lothar Wieler, the head of the RKI, for sharp criticism. Lauterbach, however, has maintained that Wieler still has his trust.

According to a draft resolution released ahead of the meeting of state and federal leaders on Wednesday, the decision on recovery status is set to be reversed.

In an interview with DPA, Lauterbach also floated the idea of amending the Infection Protection Act to allow for a flexible approach to managing Covid after March 20th.

In the latest version of the bill, all Covid measures aside from masks and social distancing are due to be removed on this date.

Agreeing that it was time for a “measured relaxation” of rules, Lauterbach said he also wanted to ensure that the government could react quickly to any unexpected developments in the pandemic.

For that reason, the Infection Protection Act should be formulated in such a way “that basic protection remains guaranteed and can be extended if necessary”, he said.

“We will amend the text in the parliamentary procedure so that even after March 20th more is possible than masks and social distancing.”

READ ALSO: German leaders to thrash out plan to phase out Covid restrictions