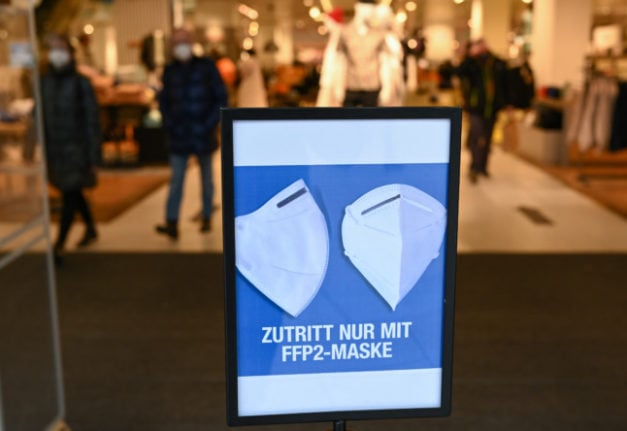 A sign for FFP2 masks at the front of a shop in Frankfurt. Photo: picture alliance/dpa | Arne Dedert

The plans to lift coronavirus measures by March 20th, which some German media have dubbed ‘freedom day’, have largely been welcomed.

“Society needs a plan for gradual loosening, but of course with a sense of proportion,” the chairman of the German Hospital Association, Gerald Gaß, told the Redaktionsnetzwerk Deutschland.

“This is especially true because the figures do, after all, indicate that we have passed the peak of the Omicron wave.”

On Tuesday, the Robert Koch Institute (RKI) reported a decline in the nationwide 7-day incidence for the third day in a row.

The 7-day incidence stood at 1,437.5 infections per 100,000 residents on Tuesday, compared to 1,459.8 the day before. However, experts believe a high number of cases are not recorded in the RKI data.

German Chancellor Olaf Scholz and state leaders will discuss the plans at their Covid summit on Wednesday.

The draft sets out how Germany can gradually abolish nearly all Covid-19 protection measures by spring.

As a first step, private gatherings for vaccinated and recovered people are to be allowed again with up to 20 people allowed. In shops, the 2G rule is to be dropped nationwide, but the obligation to wear masks is to remain.

The doctors’ association Marburger Bund also considers a phasing-out of measures to be the “right approach”.

“It can only be done step by step and with a sense of proportion,” said Susanne Johna, head of the association, in an interview with the Neue Osnabrücker Zeitung.

The obligation to wear FFP2 masks should be the last measure to be dropped, Johna stressed.

For virologist Klaus Stöhr, however, the phasing out plan does not move fast enough. He called on politicians to loosen the rules more quickly.

“You have to relax (the rules) everywhere where it can be proven that there are no corona outbreaks,” Stöhr told RND.

He said lifting the Covid health pass entry restrictions (known as 2G, 2G-plus or 3G in Germany) in shops and restaurants should happen immediately because they “have never been (Covid infection) hotspots”.

“Since hospitals are obviously not threatened with being overburdened, any further delay in easing must be justified precisely, with facts and figures,” said Stöhr.

But some people have questioned the plans to set a date for lifting Covid restrictions.

The president of the World Medical Association, Frank Ulrich Montgomery, said he saw “a lot of sensible things in this paper.”

However, he considers it “problematic that the relaxations are tied to calendar dates, because the virus does not care about the calendar beginning of spring”, Montgomery told newspapers in the Funke-Mediengruppe.

“It would make more sense to tie it to a mix of data on hospitalisations, intensive care bed occupancies and the incidence of new infections,” he said.