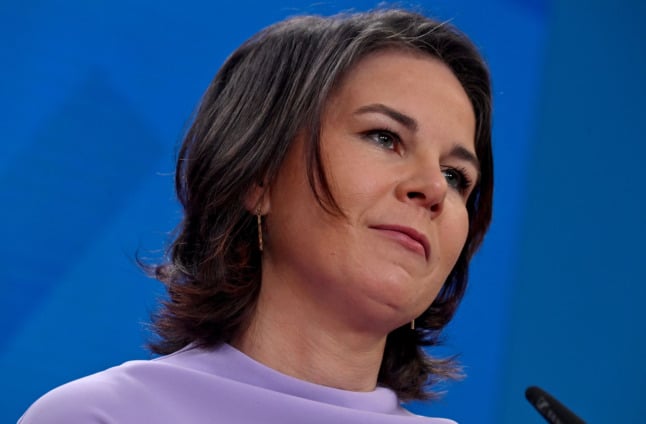 It’s been a stomach-churning week to be a woman in Germany.

Ladies, has it been a while since you were GerMansplained, or belittled by a healthcare professional, or realised how much less you earn than your male colleagues? Not to worry – a rapid-fire barrage of high-profile news cycles has put the sexism rife in the Bundesrepublik front and centre again.

In the space of a week, we saw a prominent female politician demeaned on national television, learned that the extremely murky scandal involving claims of sexual misconduct at the media giant Axel Spring was probably even more egregious than previously reported, and received a nice visual reminder of just how unequal the corridors of power in media and politics still can be, particularly in Germany:

Yes, we have just emerged from 16 years with Angela Merkel as chancellor of Germany. But in a sense, the Merkel era was a fig leaf – as long as the world’s most powerful woman was steering the ship, Germany could pose as a progressive leader on women’s rights without actually doing the work.

I know when I moved here over a decade ago, I bought into the fairytale of Germany being ahead of the curve in so many aspects (including women’s rights), until a thousand jarring little experiences stacked up and built an unflattering picture of a country trapped in the 80s, or maybe the 50s, with regards to persisting bone-deep assumptions about women, structural inequalities in the workplace, entrenched sexism in the medical establishment and regressive barriers to reproductive medicine.

READ ALSO: Angela Merkel – What did Germany’s first female chancellor do for women?

In 2020, women in Germany still earned 18 percent less than their male counterparts. Germany is often lauded for its extensive parental leave, but in a way it’s a velvet coffin for women’s careers: while fathers often take a token few months, women drop out of the workforce for a year or more, and suffer lifelong setbacks on earnings, promotions and pension payments. Should they buck the trend and return to work sooner, they’re criticised, and are sometimes called Rabenmütter – “raven mothers,” cold and calculating.

Don’t want to become a mother in this environment? Well, open your wallet – the contraceptive pill isn’t covered by standard health insurance in Germany for most women over the age of 22. In most cases, the morning-after pill isn’t either. At least it doesn’t require a prescription anymore: the quest for the honour of paying out-of-pocket for Plan B used to involve a day-long odyssey between church-linked clinics that flat-out refused to prescribe it, and doctors nosily demanding a play-by-play of your sexual history. Small mercies. Germany’s latest government – the traffic-light coalition – intends to liberalise prior restrictions on information regarding abortion access, but up until now, Germany has been firmly mired in the past on this front as well.

Speaking of the new federal government, this week was a good reminder that no matter how competent and powerful you are, if you’re a woman, there’s always some GerMan ready with a sexist, condescending quip. When Merkel was running things, she got stuck with the moniker “Mutti” [Mommy], despite being childless.

Now it’s Annalena Baerbock’s turn. The Green Foreign Minister of one of the world’s most influential nations has been abroad, with a work itinerary including stops in unsettled regions like Ukraine and the Middle East. Discussing these events on the morning news, Tagesspiegel journalist Christoph von Marschall needed a fitting descriptor for the 41-year-old minister – and settled on the patronising “diese junge Dame” (this young lady) He followed it up with an assertion that Baerbock seemed not to feel at ease in this environment, and concluded that it (the world stage? global politics? power?) wasn’t her world.

The latest instalment of sexism in German media; a reporter calling Germany’s 41-year-old Foreign Minister Annalena Baerbock “this young lady” (#diesejungedame). Women are both too old and too young, whatever age they are. https://t.co/TxaQVJuRcZ

Condemnation came swiftly, with German and international journalists and politicians eviscerating von Marschall’s choice of words. He issued a half-hearted apology, and on the other end of the spectrum, reactionary voices bemoaned a perceived debate culture of outrage. Yet another media storm in a teacup, which hits a nerve for many women working and living in Germany, but will probably simply entrench the consciously and subconsciously sexist in their positions and fail to change much of anything.

After all, Germany’s initial #MeToo moment came even earlier than the global movement, with an extended 2013 news cycle under the slogan #Aufschrei (oucry) kicked off by journalist Laura Himmelreich’s revelations of sexist behaviour concerning FDP politician Rainer Brüderle.

And yet despite the conservative pundits denouncing “Genderwahn” (gender madness) and supposed cancel culture run amok, here we still are. In the day-to-day of German workplaces and society, it is clear that true gender equality has a very long way to go.

Another week, another discussion about whether Germany has become too bike-friendly or, on the contrary, is still a country where the car is king – a cruel monarch who, day in, day out exacts a deathly toll on cyclists, pedestrians, and indeed anyone who likes to breathe air. To those of us with a high proportion of Germans in our Twitter feeds, this debate is nothing new; now, thanks to the fact that the populist think-pieces of Bild are now available in English (Who knew?), the long-running ideological slanging match between drivers and riders is now there for all to follow. Oh, joy!

…illustrated by a picture where most of the carriage AND footpath space is taken up by cars 🤦‍♂️ pic.twitter.com/0CWyKsmPBp

For many who move to Germany, the country appears, at first sight, to be firmly in the grip of cyclists. Especially in the university towns of the flat north such as Münster, Göttingen, or Braunschweig, the sheer number of visible bikes is remarkable, and even in Hamburg and Berlin, there are cycles lanes seemingly everywhere along which a constant stream of ruddy-cheeked individuals plying their pedals, making liberal use of their bells. Coming fresh from London or Paris, the contrast is striking – and you run a not insignificant risk of being mowed down when standing on the wrong bit of the pavement.

Yet to those who move here from Amsterdam or Copenhagen, Germany looks like a place where cyclists are treated as an unwelcome nuisance by traffic planners and as fair game by unscrupulous motorists with a pronounced taste for speed. The very fact that most cycle lanes are on pavements, for instance, strikes them as strange. Surely the best place for bicycles is well away from pedestrians? What is more, the large amounts of the carriageway space taken up by cars – either in motion or stationary – seem jarring coming from countries which have long prioritised cycling over driving in built-up environments.

As ever, the truth of the matter lies somewhere in between. And, as so often, we Germans have a marked tendency get into endless, cyclical arguments about points of principle and prove unable to learn to live with our contradictions. 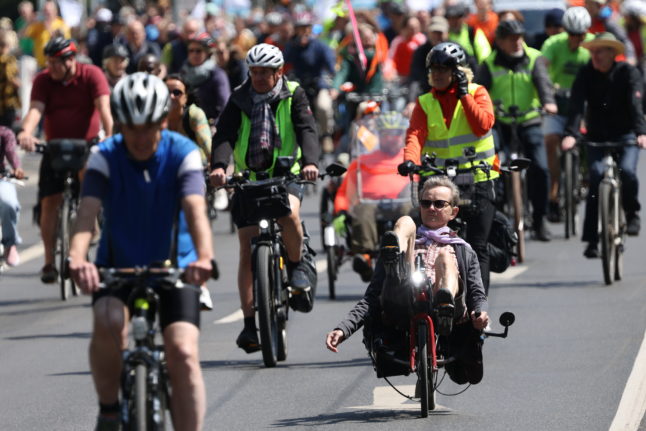 Cyclists at a demonstration in Düsseldorf in May. Photo: picture alliance/dpa | David Young

For Germany is, in traffic terms, contradictory. It is at once Europe’s automobile mecca, with the continent’s largest car industry and famously speed-limit-free Autobahns. It’s also one of Europe’s foremost cycling nations in which families routinely bike miles for weekend recreation and the country that gave the world Standlichtfunktion (rear bike lights which remain on when stationary). It’s home to various premium and mass-market manufacturers, behind only China, Taiwan, and the Netherlands in terms of bicycle production and export.

This becomes clear when comparing the bikes Germans ride to those of our European neighbours. Generalisations being odious, the average UK bicycle is a mountain bike poorly suited, in typical British fashion, to the use its owner is making of it: that’s why London businessmen ride into work with their suits in grubby rucksacks with tell-tale streaks of mud up the back and why they are continually scraping around for batteries to put in clip-on lights which inevitably fall off and smash halfway. French households, if at all, have sleek, spotless racing bikes reserved for sporting use in the evenings and at weekends. Otherwise, city-dwellers use widely-available rental bikes – unless it is raining, too warm, too cold, or too windy, or in any other way preferable to not do so. On the other end of the scale, the Dutch and the Danes have workhorse bikes which can fit everything from small children and large dogs through to IKEA flat-pack furniture.

The average German bike, meanwhile, is an all-in-one mountain-cum-city-bike (“Trekkingrad”) with the attention to practical detail for which the country is famous: fitted dynamo-driven lights as standard, a frame over the back wheel onto which weather-proof saddle bags can be clipped, and mudguards over both wheels; it will have at least 21 gears, the highest of which will enable someone in good physical health to do at least 15mph on flats and, increasingly, an electric motor to help it go even faster. Germans build bikes like they build cars: to get you and your stuff comfortably and speedily from A to B. This, by the way, explains the increasing popularity of the pedelec cargo-bikes at the root of the current controversy: they do more or less all the things a car does.

High standards – whatever the transport mode

And this is the nub of the issue: Germans – whether in cars or on bikes – have high standards when it comes to transportation and are congenitally impatient (see also queuing behaviour and ALDI cashiers). When in our cars, we expect to be able to bomb down pot-hole free roads at a minimum of 30mph (and preferably more) and then immediately find a parking space wherever we end up; any impediment to our right of way is taken as a personal insult; pedestrians must cross at designated points or risk death. 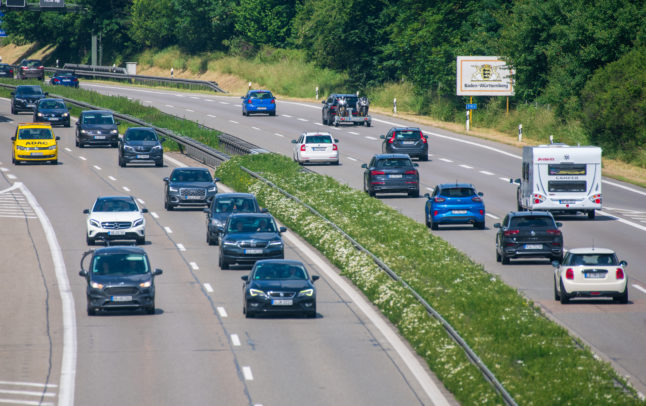 And when on our bicycles, we Germans exhibit exactly the same traits: we expect absolutely obstacle-free cycle paths and bike lanes, ample stands and racks wherever we dismount, and are genuinely angry when anyone – on four, on two wheels, or on foot – gets in our way. To give you an idea of just how exacting we Germans are of each other here: I was once, in the driving Hamburg rain, tailgated all the way down the bike lane along Glacischaussee by a woman who, when we stopped at the lights, told me that my mudguard was “antisocial” (asozial) because it, in her opinion, didn’t go far down enough over my back wheel, meaning that she was getting spray in her face. It simply didn’t occur to her to just ride further back or overtake me.

Unfortunately, of course, there is nowhere near enough space in German cities for both those in cars and those on bicycles to be able to drive and ride exactly the way they would like to at all times – without, that is, getting rid of pedestrians entirely (potentially one thing the two groups might agree on). And so we are stuck with groups of road and pavement users shouting abuse at each other (“Verkehrsrowdy!” – road-hog; “Schleicher!” – slowcoach) rather than learning to show consideration, adapt to sub-optimal conditions, and react to unforeseen circumstances. In my own view, the sooner we ban cars entirely from city centres and reclaim the streets for those of us using healthy, emissions-free transport, the better; in the meantime, however, life is too short to be shouting at each other – and could be even shorter for some of us if we all keep trying to do top speed in the same spaces.