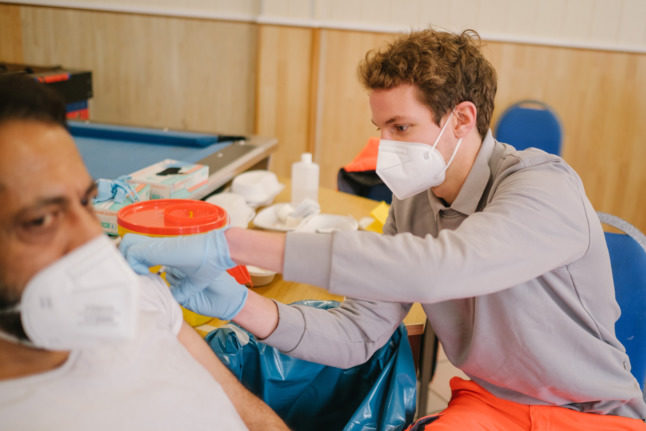 The government is facing a growing backlash against a planned vaccine mandate for hospital and nursing home staff.

The law is scheduled to come into force on March 15th but the opposition Christian Democrats (CDU) and their Bavarian sister party the CSU are publicly calling for a suspension.

“The federal government must realise that this institutional vaccination obligation is hardly feasible at the moment,” CDU/CSU health spokesman Tino Sorge told Bild on Tuesday.

“The suspension should apply uniformly throughout Germany until central legal and practical questions are answered.”

Among other things, he said, the government must clarify the question of how to deal with staff who are considered indispensable by institutions.

“It doesn’t look like the traffic light coalition will succeed in doing that in time” ahead of the mid-March deadline, he added.

On Monday evening, CDU leader Friedrich Merz called for the introduction of the professional vaccine mandate to be postponed amid fears of losing valuable staff in the care and health sectors.

Merz accused the federal government of leaving institutions and their employees to deal with the consequences of the vaccine mandate alone.

When the law was first introduced, he said, the CDU had agreed to support the move, but only on the assumption that any problems would be ironed out beforehand.

Earlier in the day, Bavarian state premier Markus Söder (CSU) had announced that the measure would not be implemented in the southern state until further notice.

Citing issues with staffing in nursing homes, Söder said Bavarian authorities would act “generously” with health and care employees, “which amounts to a de facto suspension of enforcement”.

“Basically, it’s just a PR ploy to get in the media,” FDP health politician Andrew Ullmann told the Augsburger Allgemeine. “If there was a serious interest in implementation issues, he could have worked on it with the federal government and the states.”

The president of the social care association VdK, Verena Bentele, told the Neue Osnabrücker Zeitung that Söder’s claim that he was protecting nursing home patients was absurd.

“There is a law that was passed to protect these people,” Bentele said. “If (the vaccine mandate) is not implemented now because of a lack of oversight, this puts people’s lives at risk.”

The law, which was already passed by the Bundestag and Bundesrat in December, stipulates that employees in nursing homes and clinics must present proof of being vaccinated or recovered – or a medical exemption – by March 15th.

Employers must inform the health authorities if this is not done, and failure to comply can lead that employee being dismissed.

However, in recent weeks the Health Ministry has hinted that the authorities may take a while to review each individual case – during which time unvaccinated employees can continue to work.

Lauterbach has rejected calls for a postponement and emphasised that the law will still apply at the intended date.