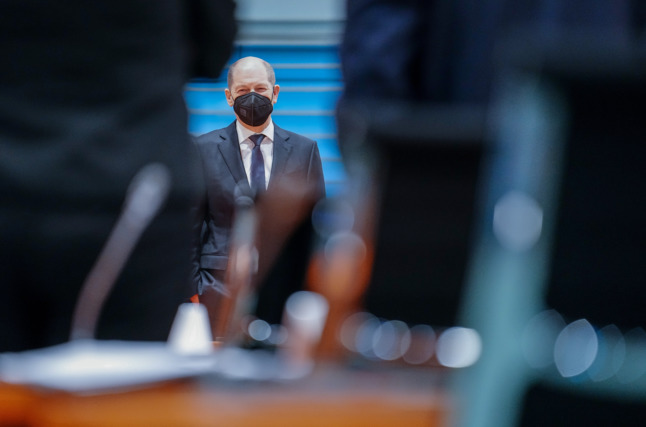 The hashtag #woistscholz (“Where is Scholz?”) is doing the rounds on Twitter, and some say the famously taciturn politician needs to start speakng up.

Scholz was sworn in as chancellor on December 8 after leading his Social Democrats (SPD) to a sensational election win, ending 16 years in power for Angela Merkel’s conservatives.

But a Forsa survey this week showed the SPD behind Merkel’s CDU-CSU in the polls for the first time since the election — on 23 percent compared with 27 percent for the conservative bloc, which is now the main opposition party.

Scholz himself, feted for winning the September 26th election with a campaign that played on his calm demeanour and meticulous approach, is also seeing his popularity wane.

In a recent survey by public broadcaster ZDF on Germany’s most popular politicians, Scholz found himself lagging behind Merkel — who has retired from politics — and Health Minister Karl Lauterbach.

Scholz, who will fly to Washington to meet US President Joe Biden on Monday, has long been known for his understated style.

He was once dubbed “Scholzomat” for his dry, robotic speeches.

Merkel was hardly known for her media presence or rousing speeches, but Scholz “seems to want to surpass her in the art of disappearance”, according to Der Spiegel weekly, which accused him of being “almost invisible, inaudible”.

“He is heard and seen very little, and when he does speak, he often does so in riddles and not in a clear and pointed manner as required by the current media world,” she said.

Though Scholz makes a habit of thanking journalists for their questions at press conferences, he often avoids answering the questions directly.

The chancellor may be trying to create an impression of “professionalism and seriousness” in a media environment “where everyone speaks and comments on everything”, according to Münch.

But if concrete results come too slowly or not at all, his “can-do” image — so skilfully harnessed during the election campaign — could be in danger.

“Telling people ‘You can rely on me, I am experienced and I know what I am doing’ is simply not enough in a pandemic or an international crisis,” political scientist Hajo Funke told AFP.

Scholz’s communication style leaves “a lot of room for improvement”, he believes.

Germany had vaccinated just 75.8 percent of its population against the coronavirus by the end of January, falling short of an 80 percent goal set by Scholz’s government.

Compulsory vaccination, first mooted by Scholz last year with a view to implementation by February or March, has still not been voted on in parliament and is looking an increasingly remote prospect. Meanwhile, numbers of Covid-19 cases have soared to more than 100,000 cases a day, with a shortage of PCR tests adding to the country’s woes.

Europe’s biggest economy has also come under fire for its role in the Ukraine crisis, with some feeling Berlin is being too soft on Moscow.

Unlike French President Emmanuel Macron, who has had several phone conversations with Vladimir Putin, and Britain’s Boris Johnson, who travelled to Kyiv on Tuesday, Scholz has muddled his response with unclear statements and fluctuating positions.

Germany has also been criticised for its refusal to send weapons to Ukraine, though it did suggest sending 5,000 helmets instead — “a disaster in terms of communication”, according to Münch.

The pro-Russian stance of some Social Democrats, including former chancellor Gerhard Schroeder, has also done nothing to ease the problem.