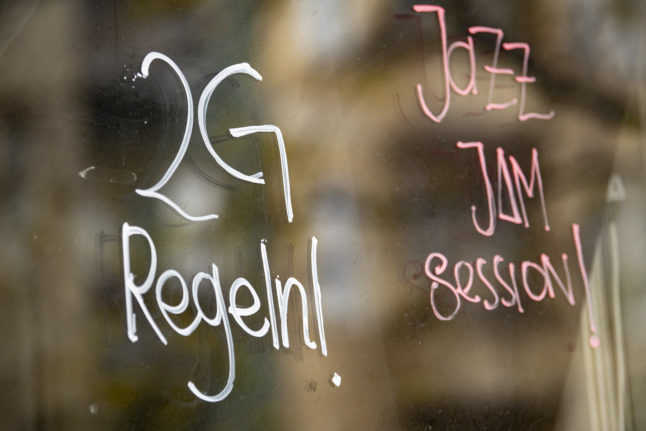 The rule changes mean that anyone who has received the second of their two Covid jabs within the last three months will no longer have to present a negative test to go to bars, restaurants and cafes.

The same will apply to people with a recovery status, which currently means anyone who has a positive PCR test taken more than 28 days ago but no longer than three months ago.

From Saturday, these two groups – along with people who’ve had a booster jab – will be exempt from the testing requirement at 2G-plus events and venues.

The tweak to the rules will come as welcome news to people who have received the Johnson & Johnson vaccine and an additional jab.

Since Johnson & Johnson was initially marketed as a one-shot Covid vaccine, the second shot of vaccine was initially counted as a booster and exempted people from having to take a test under 2G-plus.

In January, however, the Health Ministry quietly changed the status of this group to fully vaccinated and said that a further booster jab was required.

Meanwhile, people who had not got a second jab after J&J were downgraded to unvaccinated.

Since an interval of at least three months is required between the second and third doses of vaccine, many of these people have been stuck in limbo when it comes to entering 2G-plus venues (where a booster jab or test is required on top of vaccination and recovery).

The change by the Berlin Senate closes this loophole to ensure that the recently vaccinated no longer have to rely on tests until they can get their additional shot.

It also allows other people who have opted to get vaccinated more recently to socialise in bars, restaurants and cafes without regular tests.

Another key change that will come into force on Saturday is the scrapping of the confirmatory PCR test after a positive antigen test result.

From February 5th, a positive rapid test result taken under supervision (i.e. in a test centre) will be sufficient to require people to self-isolate. If the test is a self-test taken at home, a confirmatory rapid test will still be required.

PCR tests will only be required if the self-test and rapid test produce contradictory results.

The move follows plans by the federal government to limit the availability of PCR tests at the height of the Omicron wave.

At a meeting of the state and federal leaders in January, ministers resolved to restrict access to PCR tests to vulnerable groups and people who work with high-risk individuals.

According to the latest ordinance from the Berlin Senate, staff in hospitals and care homes will still have to take a PCR test to confirm their positive rapid test result.

Meanwhile, hospitality businesses, hotels and events organisers will no longer be required to record the contact details of guests and whether evidence of tests or certificates was presented.

This follows a key decision by the Berlin Senate not to renew its contract with the much-maligned Luca App.

The app – which allows people to submit their contact data on a smartphone when entering public venues – had been a key tool in contract-tracing efforts at public venues in the early part of the pandemic.

But critics have voiced concerns about the app’s data security and privacy practices.

An earlier version of this article stated that the changes were going to come into force on Friday. This has now been corrected.