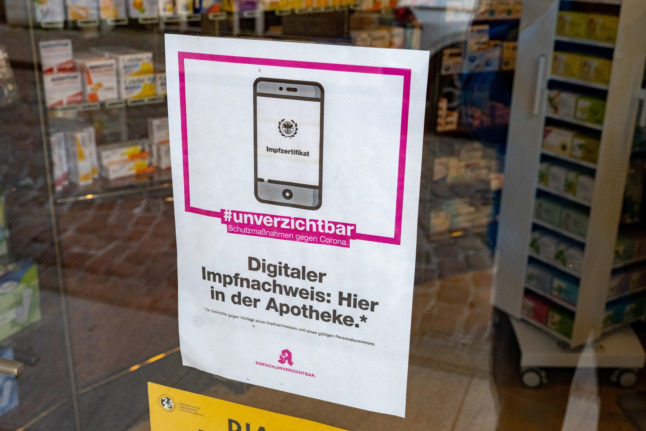 According to information obtained by Neue Osnabrücker Zeitung (NOZ), 204.7 million vaccination certificates had been issued by pharmacies and doctors in the run up to Friday.

This is around 25 percent more than the some 162.1 million vaccinations reported on the Robert Koch Institutes (RKI) website as of Monday.

The discrepancy between the two figures has let some to question whether German officials may have drastically underestimated the number of vaccine doses given out so far, or whether the difference suggests there have been falsified certificates.

However, a ministry spokesperson told NOZ that the could be “various reasons” for the 42 million extra certificates that had been issued.

“When they originally came into circulation, many certificates were automatically created by vaccination centres and sent to the vaccinated persons, while the persons concerned had often already been issued a certificate in a pharmacy,” they said.

They also pointed out that certificates “could be issued more than once, for example if a person loses their copy”.

Nevertheless, the difference between vaccine doses administered and certificates printed has been growing rapidly in recent weeks.

That means that, in mid-December, the “surplus” of certificates was still just under 26 million, compared to the current figure of more than 42 million.

During this period of time, the government was carrying out an ambitious booster jab campaign with targets of 30 million jabs within a month. This may have seen people pick up automatic proof of vaccination at state-run vaccination centres as well as getting a copy from their pharmacy.

It also roughly coincides with the government bringing in blanket ‘2G’ rules (vaccinated or recovered only) across the country, which could have motivated people to dig out their old certificates or get new ones printed.

Vaccinations carried out in doctors’ surgeries are organised by the Federal Association of Doctors (KBV), who told NOZ they could not explain the discrepancy.

A spokesperson from the KBV said there didn’t seem to be underreporting based on available billing data, adding that in-depth analysis from the RKI would be needed to investigate the matter further.

According to NOZ, the RKI were unwilling to comment.

Not everyone who’s been vaccinated would have got a digital certificate, she argued, which could point to a larger number of superfluous passes than the 42 million mentioned.

“In that case, something would have gone wrong with more than every fourth vaccination,” she told NOZ.