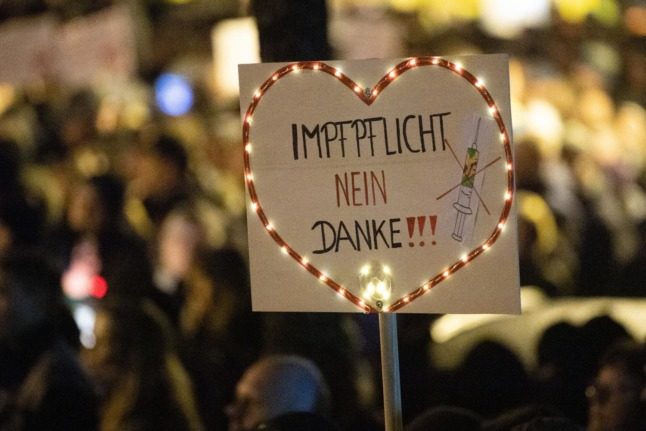 A protester holds a sign that says: 'vaccine obligation - no thanks' during a demonstration in Bautzen, Saxony, on January 24th. Photo: picture alliance/dpa/dpa-Zentralbild | Sebastian Kahnert

The introduction of compulsory vaccination has been the subject of controversial debate in Germany for weeks.

Supporters of the move see it as a necessary measure to significantly increase the vaccination rate in the fight against Covid-19, and to get the pandemic under control.

Opponents say that a mandate is not needed – and point out that leading politicians of all parties did, until recently, pledge that there would be no compulsory vaccinations in Germany.

The consultations in the Bundestag start at 3pm and are scheduled to last three hours. It is a so-called orientation debate, and is not yet based on a concrete bill.

Speakers from the SPD include Health Minister Karl Lauterbach, but Chancellor Olaf Scholz will not speak in this debate.

Scholz and Lauterbach have spoken out in favour of compulsory vaccination for people in Germany over the age of 18.

The ‘traffic light’ coalition government – made up of the SPD, the Greens and the FDP – have already agreed that MPs should deliberate and vote on their own conscience rather than have to follow a party line.

A number of debates will take place and the vote will likely be held in the coming weeks.

How might a general vaccine mandate work in Germany?

There are three approaches being discussed so far:

As The Local has reported, if the vaccine mandate law is voted through by parliament, three jabs would be required for someone to count as fully vaccinated, rather than the previous two.

At the moment at least 42.2 million people, or 50.8 per cent of all residents, have already been boosted.

This means that they have usually received three injections – all recommended vaccinations. Meanwhile, many people will be due for their booster vaccinations soon so that number will increase.

According to the Robert Koch Institute (RKI), 15 percent of the 69.4 million adults in Germany are still not vaccinated. Some, however, cannot receive a jab for medical reasons.

Before the initial debate, party representatives from all camps promoted their positions.

“Age is an easily measured risk factor for a severe course (of Covid),” Ullmann told the Augsburger Allgemeine.

“A vaccination requirement for people over the age of 50 can fulfil this goal.”

What do people outside politics think?

A majority of people in Germany think the debate on compulsory vaccination contributes to the division of society, according to a survey.

In the poll conducted by YouGov for DPA, 62 percent of respondents held this view, while 26 percent said they didn’t see a danger of further division.

However, 79 percent said that society is already divided into people who are vaccinated against Covid-19 and those who are unvaccinated – two years after the start of the pandemic.

A recent YouGov survey suggested that 60 percent of Germans support the introduction of compulsory vaccination, down from 63 percent in December. A total of 32 percent said they were against it.

There have, however, been several high profile demonstrations held across Germany against vaccines in recent weeks.

“It spares certain sectors from having certain difficulties in the pandemic,” he said. Therefore, “it is important that politics gets going now and sets a regulation in motion”.