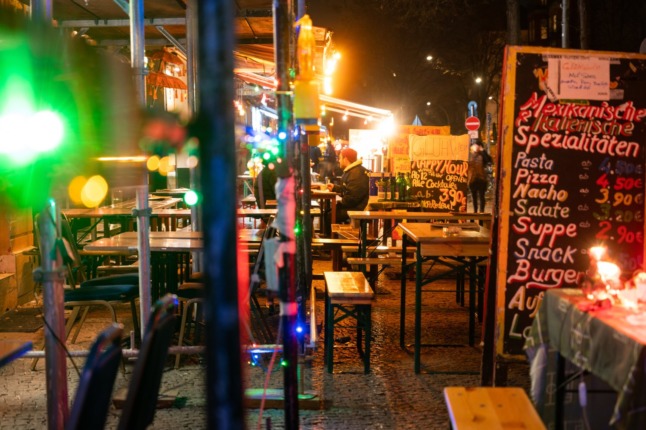 That’s according to an agreement by Chancellor Olaf Scholz (SPD) and the state government leaders.

Currently only fully vaccinated and those who’ve recovered from Covid-19 recently can enter most public areas, such as restaurants, bars, museums and non-essential shops (known as the 2G rule). People who choose not to get vaccinated are not allowed into these places.

But under the new restrictions, the catering sector will have to introduce the 2G-plus rule nationwide. It means that fully vaccinated and recovered will have to show a recent Covid-19 negative test to enter bars, restaurants and cafes.

People who’ve had their booster shot on top of being fully vaccinated do not need to take a Covid-19 test. They will instead have to show proof of their top-up Covid shot.

Scholz said the rules were “strict” but necessary “to help us progress more quickly” in the fight against Omicron, which he said “will be with us for a long time”.

Previously, only some states and individual businesses have opted for the 2G-plus rule.

But it will soon apply nationwide and regardless of the incidence, according to the agreement from the government and states.

For the time being, however, the state of Saxony-Anhalt will stick to the 2G rules, it emerged after the meeting.

State premier Reiner Haseloff (CDU) said the Delta variant is still the most dominant strain of Covid in the state so the new measures are not needed for the time being.

The aim is to “pay special attention to bars and pubs,” when enforcing the new 2G-plus rule, the resolution paper states.

It is unclear when the new nationwide rules will come into force. An earlier draft had earmarked January 15th.

Meanwhile, quarantine rules will also be relaxed to protect vital services and infrastructure from shutting down due to expected staff shortages, Scholz said.

Anyone infected with Covid as well as their close contacts will be able to end their quarantine after 10 days if they have no symptoms.

They can be released after seven days if they provide a negative test.

Those who have received a booster will no longer have to quarantine if they have come into close contact with an infected person.

Omicron ‘will cause increase’

Germany has so far reported modest case numbers since the start of the year compared to many of its European neighbours, which have been engulfed by record surges.

The Robert Koch Institute (RKI) health agency recorded 56,335 new infections in the past 24 hours on Friday, with an incidence rate of 303.4 new cases per 100,000 people over the past seven days.

But Scholz said he expected that “the Omicron variant will cause infections to increase, and we will see larger numbers in the coming days and weeks than we are already seeing today”.

Germany’s new government under Scholz, who took over from Angela Merkel as chancellor in December, has so far ruled out imposing a lockdown.

However, it has limited private gatherings to 10 people, or two households if an unvaccinated person is present, as well as banning spectators from
football games.

Unvaccinated people have also been barred from large parts of public life, including cultural events, gyms and leisure facilities.

Scholz urged as many people as possible to get their booster, describing the jab as “the best protection against Omicron”.

Almost 42 percent of Germans have already received a booster, while 71.6 percent have received a first and second dose.

Scholz said last year he was in favour of compulsory vaccination in Germany, with parliament due to start debating the issue at the end of January.