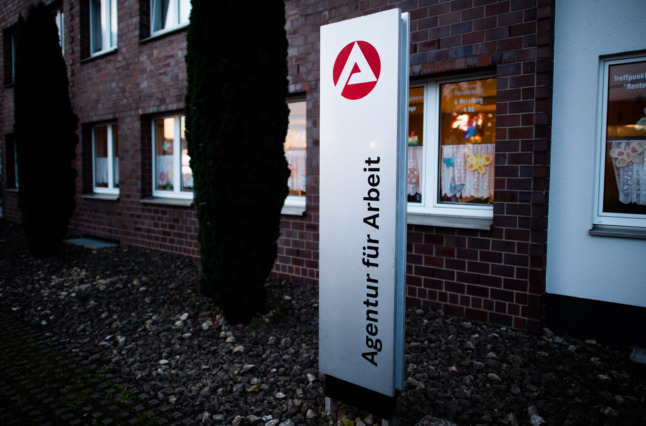 A sign stands outside the offices of the Federal Employment Agency in Hannover. Photo: picture alliance/dpa | Julian Stratenschulte

Unemployment in Europe’s top economy climbed as high as six percent in the months following the rapid spread of the coronavirus through Europe in the first half of 2020.

Germany has relied heavily on subsidised short-term work schemes to help businesses and workers whether the pandemic storm, with nearly six million Germans placed on reduced hours at the peak of the crisis in April 2020.

The scheme was still supporting some 710,000 people according to the latest available figures from October, the BA said.

An uptick in applications made for the short-term work scheme at the end of the year showed the “uncertainty” caused by rising numbers of coronavirus cases and the emergence of the highly transmissible Omicron variant, the BA said.

The overall improvement in the job market over 12 months was “encouraging” but “the new virus variant will be a difficult test for the German economy,” said Fritzi Koehler-Geib, chief economist at public lender KfW.

In the draft budget passed by the cabinet last week, the government earmarked €163 billion for the Ministry for Labour in total – the largest allocation of spending in any ministry.

However, though the overall amount spent in this department was €2 billion higher than last year, the so-called “benefits for integration into employment” will be cut from €4.8 billion to €4.2 billion.

The benefits for integration into employment are designed to ease to the transition from long-term unemployment into full-time work. The budget is used to finance wage subsidies for employers who hire the long-term unemployed, in addition to services like addiction counselling and debt advice.

Having lifted caps on borrowing during the Covid crisis, Finance Minister Christian Lindner (FDP) is keen to reinstate them next year under a policy known as the ‘debt brake’.

This year, Germany has taken on around €140 billion in new debt to assist with the fallout from the Ukraine war and energy crisis, but Lindner is eyeing a more fiscally conservative approach in 2023.

Both the opposition CDU/CSU and the Left Party responded furiously to the cuts, describing the some €600 million in savings from the jobseekers’ budget as “social austerity”.

Jessica Tatti, the Left’s social policy spokesperson, told Spiegel that the changes would make it more difficult for the long-term unemployed to integrate into society and to participate in society.

“It is not surprising that the Federal Minister of Finance, Christian Lindner, is making cuts to long-term unemployment benefits in order to comply with the debt brake,” Tatti said. “If the SPD and the Greens go along with this, however, they’ll lose the last vestige of social credibility they have.”