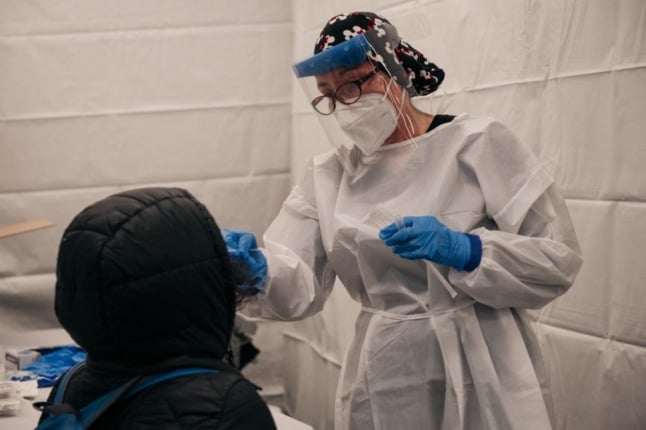 EXPLAINED: What are the current rules in Germany around Covid quarantine? Photo: Getty Images via AFP

Several changes to Germany’s Covid-19 rules could be on the way later this week, following Friday’s planned meeting between the country’s federal and state governments.

Changes to quarantine or self-isolation regulations are widely expected. Here’s an overview of the country’s rules as they now stand.

Anyone who tests positive for Covid-19 using a PCR test in Germany must isolate at home for up to ten days, including those who are fully vaccinated.

Unvaccinated close contacts of those who test positive must isolate at home until they can get tested for Covid-19. If the test is negative, these close contacts can typically leave quarantine.

Fully vaccinated or recovered contact cases are exempt from having to quarantine at all, nor do they need to take a test, as long as they show no symptoms.

However, there are exceptions to these rules in the case of infections with the Beta, Gamma, or Omicron variants. In these cases, a 14-day at-home quarantine is required for those testing positive and their contacts—even for those who are fully vaccinated or recovered. There is also currently no way to shorten that quarantine time through a negative test.

If you get a notification on Germany’s Corona-Warn-App of having been in contact with someone who later tested positive for Covid-19, you are advised to call your local health authority, your doctor, or the German medical assistance hotline at 116 117. They will likely arrange a free test for you.

Any questions about quarantine can be forwarded to your local health authority.

READ ALSO: What to do if you get a red alert on Germany’s Covid warning app

Quarantine After Entering Germany from Abroad

All travellers coming back from these countries must fill in an entry declaration. Vaccinated and recovered people returning from a high-risk area are exempt from both pre-departure test requirements and quarantine rules upon landing.

Unvaccinated travellers must present a negative test taken no more than 48 hours before entering Germany, and quarantine for ten days after arriving.

They then have the option of getting a negative antigen or PCR test on day five to be released early.

Travel from virus-variant areas is restricted to German citizens and residents, who must get a PCR test no earlier than 48 hours before landing in Germany and quarantine for 14 days without the possibility of shortening it. These rules also apply also to the vaccinated and recovered.

EXPLAINED: How Germany removing UK from virus-variant list affects you

Masks will remain mandatory in some places, but states will have the power to take tougher Covid measures, under proposals from the German Health and Justice Ministries for getting through the autumn and winter.

On Wednesday, the coalition pledged a graduated plan under the new Infection Protection Act, which will be in force from October 1st until April 7th next year.

It envisages mandatory masks in air and long-distance transport, as well as clinics, nationwide. But federal states will be able to choose themselves whether to introduce further measures like mandatory masks on public and regional transport, like buses and trams.

Under the plans, there is also the option of making restrictions even tougher if the situation becomes critical. But lockdowns and school closures have been ruled out.

The proposals have been met with a divided response so far, with experts calling for more clarity.

The German Medical Association called for uniform measures throughout the country if hospitals or critical services get overloaded, rather than different regulations in states.

“It’s important that in future, uniform measures are taken throughout Germany if certain clearly defined criteria are met,” Klaus Reinhardt, President of the Medical Association, told the Funke Mediengruppe on Thursday.

He said the plans for autumn and winter “unfortunately still remain vague”.

The German Hospital Association said it wasn’t clear when the health system would be classed as being overburdened.

“It’s not apparent how the data situation will be seriously improved,” said the chairman of the board, Gerald Gaß.

However, Reinhardt said he was pleased that the plans had “finally been formulated with consideration for our children”.

The German Teachers’ Association said it was important that states would be able to impose mandatory masks on older pupils if they need to, but questioned why masks couldn’t also be introduced in younger children.

Under the proposals, only pupils from the fifth school year onwards can be asked to wear a mask if the Covid situation worsens.

Teachers’ representatives also raised concerns about Germany turning into a “patchwork quilt” due to regions being able to take different measures.

Meanwhile, the German Association of Cities said there were still a lot of unanswered questions, including whether free Covid tests would return. The government recently restricted free Covid testing because they said it was too expensive.

“Will the free Bürgertests for all be introduced again in autumn? What will happen with the facility-based compulsory vaccination? We expect answers from the federal government on this very soon,” said chief executive Helmut Dedy.

COVID-19 RULES
Which Covid rules are likely to return to Germany in autumn?