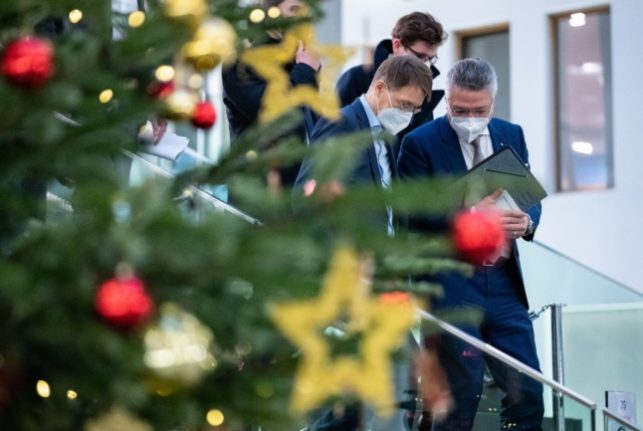 Speaking during a press conference with Health Minister Karl Lauterbach, Wieler, called for Christmas to be celebrated with a small group of close family and friends.

“We all want to spend the holidays with family and friends, yes – but we all also have to work together to ensure that Christmas does not become a kick-start for Omicron,” he said.

He urged people in Germany to spend the festive season in a way that would “not be a celebration for the virus”.

“Really only spend this time in the smallest, closest circle of friends and family,” he said.

When meeting people from at-risk groups, Wieler recommended doing a Covid test even if fully vaccinated.

Wieler said although cases have been dropping in Germany in recent days, that many intensive care units were still struggling.

He said it was now about limiting the spread of the Omicron variant of Covid-19 so clinics can get some relief before numbers rise again, which might result in more people needing hospital treatment.

In Germany, several hundred Omicron cases have been reported so far, Wieler said.

Health Minister Lauterbach told the press conference that he was watching the situation in the UK closely.

According to the BBC, the latest data suggests about a quarter of cases are Omicron. This would mean around 20,000 of Wednesday’s reported 79,000 cases in the UK could be attributed to the new variant.

It became the dominant variant in London on Wednesday.

Britain is reporting “very worrying figures”, said Lauterbach, adding that it was important to keep the spread of the variant in Germany as slow as possible.

Lauterbach said Germany’s strategy was to continually get more booster shots into arms in a bid to offer people more protection against Omicron.

He said the government was working to make sure sufficient vaccines were available, after he revealed earlier this week there would be a shortage in January. He said there were set to be 20 million too few vaccine doses in the first quarter.

Lauterbach said the shortage would mean the top-up vaccine campaign would not be completed until the end of March, which was “not sufficient for our booster strategy”.

He said that 50 million booster vaccine doses had been ordered for the first quarter, but that there was also a need for 20 million first and second jabs. But Lauterbach said: “This is explicitly not a criticism of my predecessor, I talked about it with Jens Spahn (the former Health Minister) last night.”

The Minister confirmed that the EU Commission had agreed to early deliveries of 35 million doses of Moderna. He said he was also in talks with Romania, Bulgaria, Poland and Portugal to procure more doses.

On Wednesday Germany reported a record 1.496 million vaccinations in a day, 1.3 million of which were boosters. As of Thursday, 70 percent of the population was fully vaccinated.