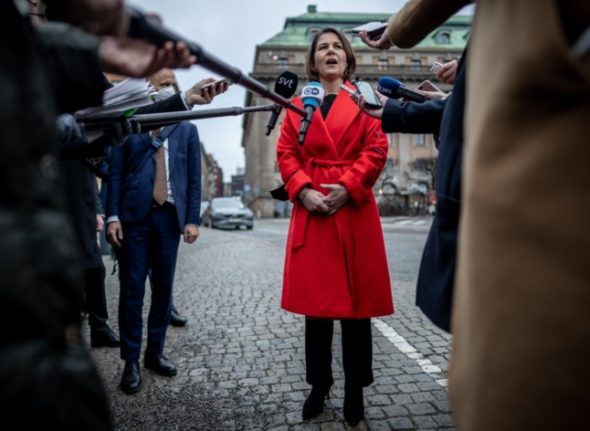 During one of my (increasingly brief) forays onto the online muck-spreader formerly known as Twitter, I saw that the pile-in du jour was on our new Foreign Minister, Annalena Baerbock. Apparently, in the opinion of various people I have neither heard of, care about, nor actually follow on the platform (that’s algorithms…), Baerbock’s English is poor, risible, a national embarrassment at best and a full-blown scandal at worst. Anyway, against my better judgement, I decided not to log straight back off immediately. Instead, I played the 17-second clip for myself out of curiosity.

I needn’t have bothered, of course: our Foreign Minister’s English is so utterly unremarkable that really only the various nuts and bots of Twitter could feel tempted to try and make an issue out of it. Sure, Ms. Baerbock could pronounce a couple of words in a slightly more idiomatic way, but English is her second language and that really would be gilding the lily for someone who is, as far as I can tell, not currently a candidate for a PhD in English Studies, but rather a minister in the German government.

Unfair criticism of Annalena #Baerbock’s #Englisch mainly from those on German Twitter who probably don’t speak English well themselves.🤨As a native English speaker, she sounds fine to me! If only Irish/UK politicians spoke #Deutsch as well as she does English!🤷🏻‍♀️ #Deutschland 🇩🇪 https://t.co/FIxU6B71Bc

What is more, Annalena Baerbock’s English is easily better than that of her cabinet colleagues. Olaf Scholz, who is often commended in passing by the German political commentariat for his language skills, does indeed speak serviceable English – but of the somewhat workmanlike variety, as his amusing jibes at Britain’s driver shortage the morning after the Bundestagswahl demonstrate (feels like a long time ago, eh? “Captain, it’s only Wednesday!”). Interestingly, despite the lack of ensuing Twitter censure, he soon afterwards stopped taking questions in English.

And just yesterday morning, I heard an item on broadcaster Deutschlandfunk about Christian Lindner’s first foreign trip to Paris: despite the fact that he mispronounced the “warm” in “warm welcome” (making it sound more like ‘warm’ in German), I have yet to see the assorted looneys of social media swoop on our newly-minted Finance Minister.

READ ALSO: What Scholz’ Brexit comments say about the next German leader

I’d suggest that this may have something to do with the fact that Annalena Baerbock is a woman, in her early 40s, and in the Greens. However, it’s also due to Germans’ wholly unrealistic expectations of how well German politicians should speak English – and to one of our less becoming national characteristics: congenital one-upmanship.

That’s why even men over 50 regularly come in for drubbings when they try – or don’t try – to speak English in front of the cameras: one of Baerbock’s predecessors in the Foreign Ministry, the late Guido Westerwelle, for instance, garnered himself a parody account “Westerwave” after refusing to speak English to a reporter at a press conference, pointing out quite correctly (if somewhat pettily) that media questions to German politicians in Germany should be asked in German. With that unique touch of class that makes Twitter the wonderful place it is, the parody account even posted a Denglish condolence on his untimely death.

A couple of years later, it was former state premier of Baden-Württemberg and then EU Commissioner Günther Oettinger who was the butt of the online bantz, dubbed “worse than Westerwave!” Admittedly, Oettinger had rather made his own bed after repeatedly going on record to say that all Germans, even blue-collar workers, should make sure they spoke good English in order to remain competitive on the employment market.

Also, his English really was bad. Nevertheless, the general eagerness to do the man down for being foolish enough to stumble into the professional equivalent of an ill-prepared on-camera oral exam was telling. Very much like the (often fat) readers of British celebrity rags scanning thighs for cellulite, when (often monolingual) Germans smell linguistic blood, they show no pity.

So the whole Baerbock storm-in-a-Twitcup can be read two ways. An optimistic assessment might conclude that, in the 10 years since Oettinger’s travails, the overall standard of English spoken in Germany has risen so sharply that even Baerbock’s excellent English – she spent a year studying at the London School of Economics (LSE), after all – is enough to garner criticism due to a residual accent. The pessimistic conclusion I draw is that casual Twitter misogyny and anti-Green campaigning are, combined with Germans’ love of criticising others for their English language skills, enough to get the social media sharks circling regardless of the facts of the matter.

READ ALSO: How do Germans compare to the rest of Europe when it comes to speaking English?

I don’t follow football, but it’s a well-known fact that Germany is a nation of 80 million people who think they would be a better coach than whoever the current Bundestrainer is. And on the topic of “trainers”, anyone who has ever held a position as one of German companies’ many English-Trainer will know just how thirsty Germans are for knowledge of the lingo – and how unforgiving they are among each other while acquiring it.

Several NDAs prevent me from speaking in detail about my time “training” adult Germans to speak English for various organisations (I was young and needed the money), but suffice it to say that I once had to break off a lesson due to a slanging match between two professional women in their mid-thirties which escalated out of control. I was also told several times by participants in adult education classes: “That’s not how I was taught English in school/learned English while working abroad/understood the NYT style guidelines which I happen to have printed out on my bedside table” – i.e. that I was wrong.

Conversely, I’d have to think a long way back to the last time I was corrected unsolicited when speaking German – even far before I attained the proficiency I now have after living here for over a decade and literally having become German. So if we Germans could learn to extend the courtesy we show to new arrivals learning our language to each other when speaking English, we’d be a lot better off – and give the Twitter bubble one less thing to blow out of proportion.