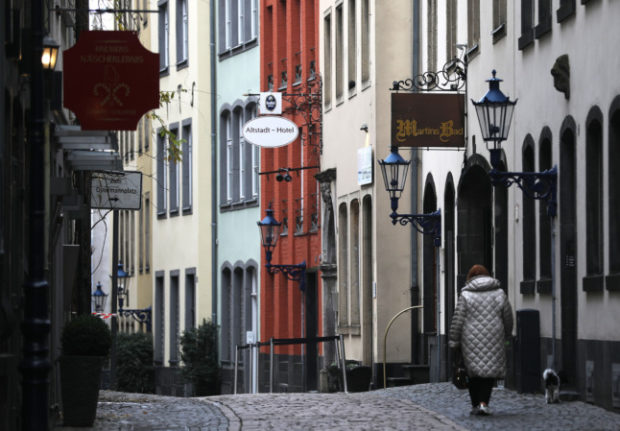 When Lower Saxony’s state premier announced new measures to fight Covid-19 on Monday, the dates he set for his partial lockdown were clearly not accidental.

From the December 24th, clubs and discos will be closed in the northern state, and all other businesses will operate under ‘2G-plus’ – an entry rule whereby vaccinated and recovered people must also have a negative test.

Meanwhile, dancing events and gatherings of more than 25 people are strictly forbidden, while unvaccinated people may meet with no more than two other people at a time.

These rules – again, not accidentally – are set to run until January 2nd, when the last of the New Year’s Eve confetti will have already been swept away.

“I am extremely concerned about what may come our way at the beginning of the year,” state premier Stephan Weil said when announcing the plans.

“The period between Christmas and New Year is one of intense social contact. We must not come out of this period with an even bigger problem than we went in with.”

What’s happening in other German states?

Beyond Lower Saxony, a number of other states are upping their game in the run-up to the festive party season.

After introducing a partial lockdown and the closure of Christmas markets in November, Bavaria is continuing with tough measures through to the new year, including pub, bar and club closures and a ban on drinking alcohol in Munich city centre over Christmas and on New Year’s Eve.

Saxony – the other state that went into partial lockdown in November – has recently announced that it is extending the measures until at least January 9th.

In Brandenburg, clubs and discos are set to be closed and events with more than 1,000 participants will be banned, while Berlin has already moved to ban dancing in clubs and reduce the capacity of nightlife venues to 50 percent.

In Hamburg, meanwhile, the state government is said to be mulling contact restrictions for people with Covid immunity – rather than just the unvaccinated – around the new year.

On a national level, infections have been dropping steadily for a number of days, prompting Health Minister Karl Lauterbach to claim that the situation is “slowly stabilising”. On Tuesday, the Robert Koch Institute (RKI) reported a 7-day incidence of 375 new cases per 100,000 people – down from 389 the previous day and 432 a week ago.

A number of measures are already in place for the festive period, such as strict contact restrictions for the unvaccinated, 2G (at least) in all public venues including non-essential shops, and a firework ban on New Year’s Eve.

Along with restrictions on public gatherings, these are already paving the way for a quieter Christmas and New Year.

However, the actions of states like Brandenburg and Lower Saxony suggest that some ministers are still braced to tighten measures over the Christmas period to prevent another upwards swing.

“This trend must not be jeopardised by Christmas,” Lauterbach warned on Twitter. “Since the case numbers are still far too high, the booster campaign must be stepped up.”

If further measures do come in over Christmas, the question is whether they will be regional or national measures.

Ministers in the federal parliament have been in a fierce debate over the measures required to fight the Covid fourth wave since the ‘epidemic situation of national importance’ was allowed to expire on November 25th, 2021.

Under Germany’s new traffic light coalition – named after the party colours of the SPD, Greens and FDP – some of these powers have been transferred to the Infection Protection Act. This means that states can continue to impose new entry restrictions of public venues, order people to quarantine when they are infected with Covid, insist on the wearing of masks and even close pubs, restaurants and clubs if the 7-day incidence of Covid infections goes above 350 per 100,000 residents.

However, they aren’t allowed to order blanket business closures or order people to stay at home – unless, like Bavaria and Saxony, they did so under the old ‘epidemic’ clause.

Critics from the opposition CDU have continually claimed the new measures do not go far enough.

But unless the federal government is convinced to make yet more amendments to the Infection Protect Act (there have already been two rounds), states will have to work with the tools that they have over Christmas.

What kind of measures could be brought in?

As mentioned, some key rules that states have at their disposal are contact restrictions, strict entry policies (i.e. ‘2G plus’) and the closure of hospitality businesses.

Lower Saxony has already introduced all three over the festive period, and other states that follow suit will be likely to implement similar measures, such as limiting gatherings, shutting bars or tightening rules around nightlife so that even vaccinated people are asked to present a test.

States could opt to follow the guidance of the RKI, which called for contact restrictions to be intensified in its latest weekly report.

Or they could target Christmas gatherings specifically, as Ulf Dittmer, director of the Institute of Virology at Essen University Hospital, suggested this week. If possible, Christmas get-togethers should only take place in compliance with the 2G plus rules, he told Handelsblatt on Monday.

On a federal level, meanwhile, Chancellor Olaf Scholz (SPD) has resolved to be flexible in his response to the pandemic – an approach which means taking nothing off the table. Chancellor Olaf Scholz sits in parliament on Monday. Scholz has said there are no red lines when dealing with the pandemic. Photo: picture alliance/dpa/POOL AP | Michael Sohn

“There must be no red lines, this pandemic has now really shown us that,” he told Bild am Sonntag. “We must always be prepared to rethink if circumstances require it, then take action quickly and decisively.”

Asked whether a Christmas lockdown may be on the cards, Scholz suggested that it would be possible – but only if current measures didn’t seem to be working.

“The federal government and the states have just taken very rigid measures,” he explained. “We will check daily how they are implemented and whether they are sufficient.”

However, changing the Infection Protection Act for a third time would be politically difficult for the traffic light coalition – particularly at a time when the new measures seem to be having an effect.

That means that, if new rules do come in, it seems likely to happen on a regional level – though, as Scholz made clear, nothing is currently being ruled out.

READ ALSO: ‘I was against vaccine mandates in Germany – until hospitals became overwhelmed’