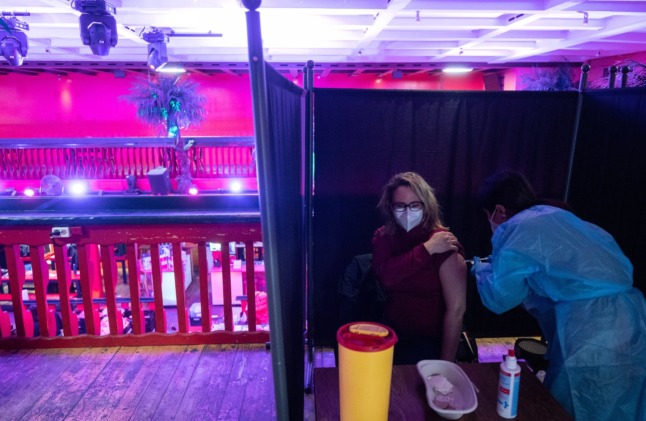 People in Germany have to be vaccinated (geimpft) or have recovered from Covid (genesen) – the so-called 2G rules – to enter most public places across the country, such as non-essential shops, restaurants and bars.

But many events – and some businesses – have a 2G-plus system where vaccinated and recovered people also have to show a negative Covid rapid test to enter.

Now health ministers are to discuss allowing people who’ve been boosted to enter a 2G-plus area without a test.

The aim is to create an incentive for people in Germany to go out and get their top-up shot to boost immunity.

In several states, people who’ve had boosters are already exempt from the test obligation for 2G-plus, including in Lower Saxony, Rhineland-Palatinate, Thuringia, Baden-Württemberg and Saarland.

In Baden-Württemberg and Thuringia, this also applies to people whose second vaccination was less than six months ago.

Ahead of consultations on Tuesday, Germany’s federal Health Minister Karl Lauterbach proposed that everyone in Germany who has had boosters should have the testing rules waived for 2G-plus.

FDP health expert Christine Aschenberg-Dugnus has a similar opinion. She told DPA: “Of course, even with a third vaccination, one does not have 100 percent protection. But even if a vaccination breakthrough should happen, you are well protected against a severe course (of Covid-19).”

Easing the test requirements could be “an additional incentive for more vaccinations”, she said.

Ute Teichert, chairwoman of the Federal Association of Public Health Service Doctors (BVÖGD), however, warned against easing the requirements for the boosted.

Teichert said this step would be hasty. “It would be wiser to wait and see how the pandemic develops in the coming weeks,” she told the newspapers in the Funke Mediengruppe.

Germany has been significantly stepping up its vaccination and booster campaign due to worries over the more transmissible Omicron variant, first detected in South Africa.

State by state: Where and how children can get vaccinated in Germany

In the Rheinische Post, he called for three new measures: first, a significant shortening of the interval between the last dose and booster vaccination; second, an expiry date for vaccination certificates “to take account of medical findings on the reduction of protection against infection” and third, adapting the travel rules so that entry to Germany from a high-risk area is only possible with a PCR test no more than 24 hours old.

READ ALSO: Is travel to and from Germany possible over Christmas holidays?