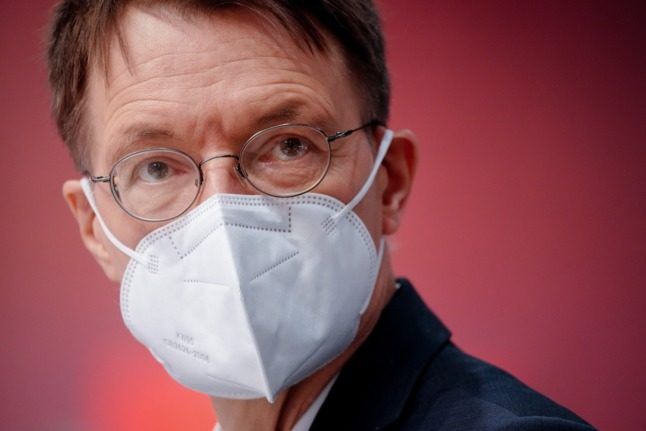 The 7-day incidence of Covid infections has been falling in Germany for several days, sparking hope that the country has got through the peak of the fourth wave.

Experts have pointed out, however, that many cases are probably not being recorded because some health offices are overburdened.

But the Social Democrat’s resident Covid expert Lauterbach, who took over as German Health Minister in the new coalition government last week, believes data now shows it is not an artificial decline.

“The situation is slowly stabilising and the decline in the number of cases is real,” said Lauterbach on Twitter.

But he warned: “This trend must not be jeopardised by Christmas. Since the case numbers are still far too high, the booster campaign must be stepped up.”

The Health Minister had retweeted German data journalist Olaf Gersemann who said: “The number of new #Corona cases admitted to intensive care units has stabilised at around 300 per day.”

Lauterbach told broadcaster ARD on Sunday that the strategy now was to administer as many booster jabs as possible in Germany.

He said getting boosters in people’s arms is “incredibly valuable” because it can end the Delta wave and avert the Omicron wave.

“That will be the focus for me to push that wave down,” he said, adding that he expected specific anti-Omicron vaccines to be available from April or May.

In total Germany reported 21,743 Covid infections and 116 deaths within the last 24 hours. However, there was no data submitted for Lower Saxony. A week ago, almost 6,100 more daily Covid cases were recorded throughout Germany (27,836).

Among the German states, Thuringia has the highest incidence with 1032.7 Covid infections per 100,000 people in seven days, followed by Saxony with 1024.5.

The lowest incidence continues to be in Schleswig-Holstein with 162.4. Meanwhile, six municipalities are reporting an incidence below 100.

The number of people in hospitals with Covid infections remains high although the numbers are stabilising. The 7-day incidence of hospitalised cases stands at 5.17 per 100,000 people.

According to the DIVI Intensive are register, 4,926 Covid-19 patients are in intensive care with around 56 percent receiving ventilation treatment.