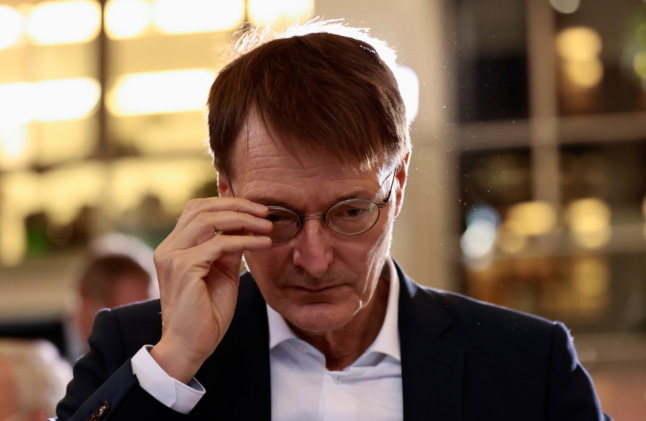 “Vaccination is only complete when you have been vaccinated three times,” Karl Lauterbach told ZDF on Wednesday.

Referring to a new study that suggested that an extra shot is required to fully protect against the newly discovered Omicron variant, Lauterbach said the results were “not surprising”.

He emphasised that it was “highly likely” that a full course of jabs would protect against severe courses of the disease, but that an extra dose was needed to help protect against illness in the first place.

Since the new ‘supervariant’ was discovered at a genome sequencing lab in South Africa, around 18 countries have found cases of the new variant. It has caused widespread concern in the medical community due to the unusually high number of mutations it has, which experts say could give it the ability to bypass vaccine protection and spread more rapidly.

Over the past few weeks, the manufacturers of Covid vaccines have been racing to determine whether their products offer protection against the new variant.

In preliminary results to their study that were published on Wednesday, Pfizer and BioNTech revealed that a booster generated around the same level of potent antibodies against Omicron as is seen after a second dose with the initial strain.

But they warned that “the Omicron variant is probably not sufficiently neutralised after two doses.”

Only four confirmed cases have been found in Germany, though there have been at least eight other suspected cases – and some say there could be as many as a few hundred undetected cases.

If the variant starts to spread as rapidly (or more so) than Delta did in summer, the government may therefore be forced to change its definition of fully vaccinated to exclude those without boosters, Lauterbach said.

“If we actually had the Omicron wave here in Germany, then the requirements for ‘2G’ (entry only for vaccinated and recovered people) would only be reached when you have the third vaccination,” he explained.

‘As many boosters as possible’

The Harvard-educated doctor was named as the country’s new Health Minister on Tuesday – a day before Germany’s new government was officially sworn in.

As an outspoken commentator during the pandemic, he has amassed thousands of followers of Twitter – many of whom called for his appointment as Health Minister under the hastag #wirwollenkarl (We want Karl).

Much is still unclear about what he intends to do in the role, though early signs suggest his focus will be on vaccination and evidence-based measures – which could include tough curbs on travel and everyday life.

On Wednesday, he told reporters his aim was to “bring infections down so much by Christmas that we are able to recommend travel”.

His entry into the Ministry of Health comes as Germany’s booster jab campaign is picking up pace. On Wednesday, doctors delivered 991,608 booster jabs – setting a new record for the amount of top-up doses given out in a day.

“We have to administer as many booster vaccinations as possible,” Lauterbach told ZDF, adding that additional jabs would be the best preparation for an Omicron wave “if it were to come”.

Vaccination is the first pillar of protection “that we have in our hands,” he said.

He has also spoken out in favour of mandatory vaccinations and is expected to vote in favour of the measure in parliament later this month.