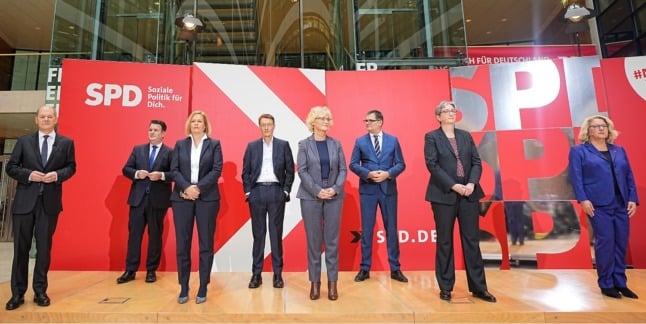 Incoming Chancellor Olaf Scholz with his SPD team of ministers for the next coalition government. Photo: picture alliance/dpa | Michael Kappeler

Scholz, a Social Democrat (SPD), unveiled his party’s line-up for the first government led by the centre-left in 16 years, with outspoken pandemic expert Karl Lauterbach tapped as Health Minister.

“Equality is important to me and that is why of 16 ministers there will be eight men and eight women,” said Scholz, who describes himself as a “feminist”.

After the Greens, partners in the incoming coalition government, named their co-leader Annalena Baerbock as foreign minister, the SPD’s Christine Lambrecht, until now justice minister, will take on the defence brief.

“All foreign missions will continually be under review,” Lambrecht told reporters following the NATO debacle in Afghanistan, calling for every operation to have a “clear exit strategy”.

Lauterbach, a prominent but divisive figure who has consistently called for tougher measures to stop the spread of coronavirus, will be the government’s
point-man to fight the pandemic.

Scholz said he was certain “most Germans” wanted Lauterbach in the job.

“Care givers and doctors deserve to see (healthcare) as a top priority in German policy,” Scholz said, as many hospitals report their intensive care units are at the breaking point with a surge in Covid patients.

Scholz’s SPD won the September 26th general election and last month sealed a deal to form a coalition with the ecologist Greens and the business-friendly Free Democrats.

He is expected to be formally elected by parliament on Wednesday.

Merkel is retiring from politics after 16 years at the helm of Europe’s top economy.