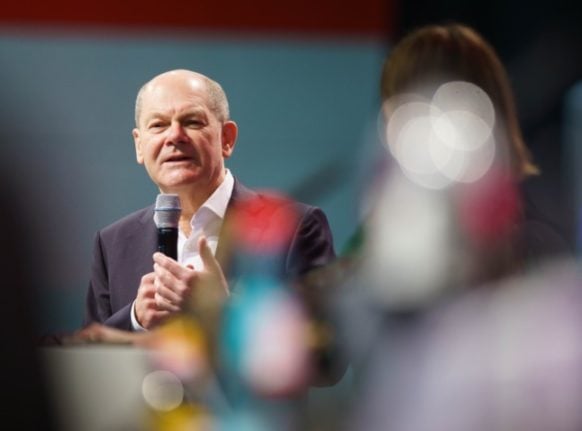 Following crisis talks with acting Chancellor Angela Merkel and the leaders of Germany’s 16 states, Scholz said he wanted parliament to vote on the matter before the end of the year.

“Too many people have not got vaccinated,” Scholz told Bild television. Making jabs compulsory is justified “to protect us all”.

The compulsory vaccinations should be in force “in the beginning of February or March so we must move quickly now,” Scholz said, promising that lawmakers would be allowed to vote according to their conscience.

Generally, MPs are expected to vote with their parties on key issues, but with ethically sensitive issues, exceptions can be made to allow parliamentarians to be guided by their conscience alone.

In the meeting, Scholz had signalled his personal support for such a measure.

He said he was “aware that there were cross-party debates” among lawmakers about making the vaccine compulsory, a source said.

READ ALSO: Is Germany on the way to introducing mandatory Covid jabs?

The introduction of a general vaccine mandate has been a hot topic in Germany after Austria announced that it would be introducing the measure in February. It has previously been ruled out in Germany but fears are growing over the dramatic fourth Covid wave and the newly detected Omicron variant.

According to sources of German news magazine Spiegel, Scholz said that compulsory vaccinations should be in place “when everyone has had a realistic chance to be double-vaccinated.”

What else is happening this week?

German leaders will meet again on Thursday to thrash out the details of the proposal as well as other new measures aimed at taming the Covid surge, said Merkel’s spokesman Steffen Seibert.

These include capping the number of people the unvaccinated can socialise with, closing clubs and limiting large events. Only the vaccinated and recovered would be allowed into non-essential shops, according to the plans.

Bavarian premier Markus Söder told reporters he expected Bundesliga football games to return to playing to empty stands, following an outcry over a packed stadium in Cologne at the weekend.

“It’s clear that something needs to change when it comes to football,” Söder said.

Several hard-hit German regions have already cancelled Christmas markets and barred the unvaccinated from public spaces like gyms and leisure facilities to slow the pandemic spread.

But critics say the patchwork of rules is confusing, and this week’s emergency talks were aimed at coming up with nationwide rules.

But critics say the patchwork of rules is confusing, and Tuesday’s crisis talks are aimed at coming up with more uniform rules for the whole country.

Scholz reportedly spoke to Merkel and the state premiers about a “national task” in which solidarity had to be shown with the German states experiencing extreme infection figures.

The incoming Chancellor said he wanted to see 30 million Covid jabs administered to people in Germany by Christmas – and that this would help to break the wave.

He said for this to happen, more vaccination offers were needed – involving pharmacists, dentists and vets in giving out shots.

According to German media, Scholz has also told participants at the talks that he is in favour of barring the unvaccinated from more parts of public life, including non-essential retail.

It comes after Germany’s highest court ruled that extreme Covid measures like curfews and contact bans – dubbed the emergency brake – were lawful, possibly paving the way for authorities to bring in tougher restrictions again if the situation calls for it.

The scheduled meeting between the federal government and state leaders has been moved forward by a week to December 2nd.