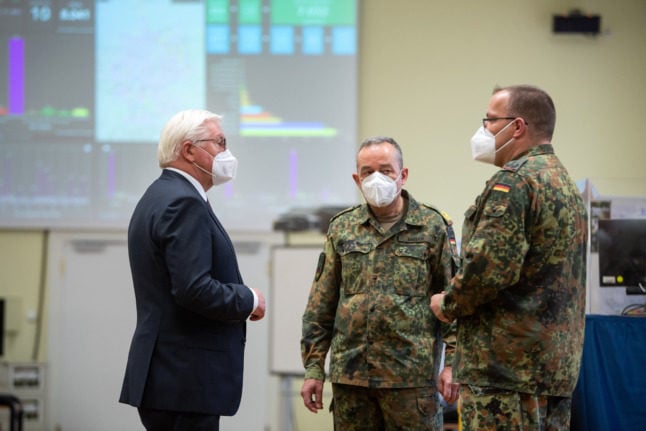 According to FDP leader Christian Lindner, the newly formed crisis team could begin its work in the next few days – meaning it will start work around a week before the new coalition government takes office.

The new group, which is likely to be headed up by a military general will be responsible for assessing the Covid situation, making key decisions and coordinating the government response to the ongoing crisis.

The decision to establish a Covid emergency team was revealed last week on Wednesday when the three ‘traffic light’ parties unveiled their new coalition agreement in a surprise press conference held at Berlin’s Westhafen.

In the agreement, the parties promise to “reorganise the government’s crisis management” by “immediately creating a joint crisis team to better coordinate the nationwide fight against the pandemic.”

Reports in the Süddeutsche Zeitung on Monday suggest that Major General Carsten Breuer is being considered as a potential leader for the response team. The 56-year-old is commander of the Bundeswehr’s Territorial Tasks Command, which is responsible for operations of the armed forces at home.

The agreement states that that the remainder of the team will be made up of representatives from both state and federal government. This is intended to speed up the sometimes arduous process of coordinating between the 16 state leaders when decided on measures.

READ ALSO: How Germany’s next government plans to fight Covid

Speaking to the Funke Media Group on Monday, Markus Lewe (CDU), the president of the German Association of Cities and Towns called for representatives of municipalities to also be involved the team.

“The new Covid crisis team must start immediately and the cities belong at the table,” he said. “The expertise of the cities is indispensable for this, because that is where the work is carried out and where Covid measures are implemented on the ground.”

The formation of the new crisis team comes as Germany struggles to get a grip on its ferocious fourth wave and respond to news of the Omicron variant which was discovered in South Africa last week.

The first cases of the variant, which the World Health Organisation (WHO) says poses a “very high” global risk, were found in Germany over the weekend.

On Monday, the Robert Koch Institute (RKI) reported that the national weekly incidence of Covid infections had hit another peak of 452 per 100,000 people, while almost 30,000 new infections were recorded within 24 hours. Since reporting tends to be lower over the weekend, the number of daily cases is expected to rise throughout the week.

Another cause of concern is the situation in hospitals. On Friday, acting Health Minister Jens Spahn (CDU) revealed that operations were having to be postponed due to limited space in intensive care wards.

In some regions, the pressure on hospital staff and wards is so great that some patients are now having to be transferred to different hospitals “at great cost”, he said. With the situation worsening daily, Spahn has been one of several voices calling for urgent crunch talks between the federal government and heads of the state governments.

Ministers had intended to discuss new Covid restrictions and review the effectiveness of the latest Covid measures at the next State Premiers’ Conference (MPK) on December 9th.

But Spahn, along with other political figures such as the Greens’ health expert Janosch Dahmen, are now calling for the MPK to be brought forward.

“The current and new federal government will have to work out which additional regulations have to be put in place in the short term in order to enable an even more consistent fight against the pandemic,” Dahmen told Welt.

“And we have to do that before December 9th.”